Shortly before Christmas, the Philadelphia Eagles voted unanimously to give quarterback and admitted dog-killer Michael Vick an award for courage. (I learned about this from Attytood).

Each NFL team gives out the annual Ed Block Courage Award to the player who best exemplifies "commitment to the principles of sportsmanship and courage". Block was the head trainer for the Colts and an advocate for neglected and abused children. Vick's teammate Donovan McNabb said the award for Vick was "well deserved".

Regarding his trial and subsequent conviction (which was not for animal cruelty, but for federal racketeering), Vick said:

I've overcome a lot, more than probably one single individual can handle or bear. You ask certain people to walk through my shoes, they probably couldn't do. Probably 95 per cent of the people in this world, because nobody had to endure what I've been through ...

What makes those words truly sickening is knowing some of the gruesome details from the investigation:

In mid-April of 2007, he, VICK, PHILLIPS, PEACE, and ALLEN tested dogs at the [redacted] location. ... It took between five and ten minutes to complete the testing of each dog. They decided to kill the dogs that they deemed not to be good fighters. He and PHILLIPS consequently drowned seven to eight dogs. Additionally, he, VICK, and PHILLIPS hung approximately four dogs with a nylon cord. One dog that did not die from hanging was taken down and drowned in a 5 gallon bucket of water. ... VICK and PHILLIPS killed a red pit bull dog, by slamming it to the ground several times before it died, breaking the dog's back or neck. ...

He and VICK took down one of the dogs that would not die from hanging and tossed the dog to the side. He later hung the same dog until it died. He wore overalls, which were hung in the garage, when he killed the dogs, so he would not soil his clothes.

The details that got to me then and stay with me today involve the swimming pool that was used to kill some of the dogs. Jumper cables were clipped onto the ears of underperforming dogs, then, just like with a car, the cables were connected to the terminals of car batteries before lifting and tossing the shamed dogs into the water. Most of Vick's dogs were small - 40 lbs or so - so tossing them in would've been fast and easy work for thick athlete arms. We don't know how many suffered this premeditated murder, but the damage to the pool walls tells a story. It seems that while they were scrambling to escape, they scratched and clawed at the pool liner and bit at the dented aluminum sides like a hungry dog on a tin can.

I wear some pretty thick skin during our work with dogs, but I can't shake my minds-eye image of a little black dog splashing frantically in bloody water ... screaming in pain and terror ... brown eyes saucer wide and tiny black white-toed feet clawing at anything, desperate to get ahold. This death did not come quickly.

How courageous of Vick -- slamming dogs' heads on concrete and tossing others into his pool to be electrocuted.

This is, of course, only a part of the brutality. The dogs are often injected with steroids or their teeth are sharpened or their ears are cut off (so another dog cannot grab them). 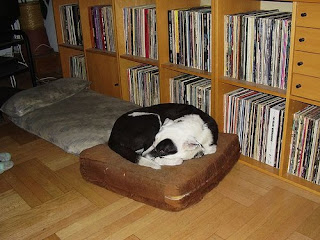 As many of you know, we had a pit-mix for about six years. Laura and Cody found Buster outside our Manhattan apartment building on a cold, rainy December night. He was near death. He had almost no fur left on his body, and the skin that showed through was gray and diseased. He was covered in open wounds and oozing infections.

We eventually realized that Buster probably had been used as a "bait dog" for other dogs to attack, or possibly had been a poor fighter. When he became too ill to continue, or possibly for under-performing, he was dumped on our street, presumably to starve and die.

Despite all this, Buster re-learned how to trust humans. He had a lot of issues, and always required special care. (Understatement!) But he was a prince.

* * * *
Working with the amazing folks at BAD RAP, almost all the Vick dogs were rehabilitated and placed in homes. A few were rehabilitated but live in sanctuary. Some of dogs even learned how to blog.
Posted by laura k at 1/14/2010 10:30:00 AM