barbara ehrenreich, rest in power. i will miss you. 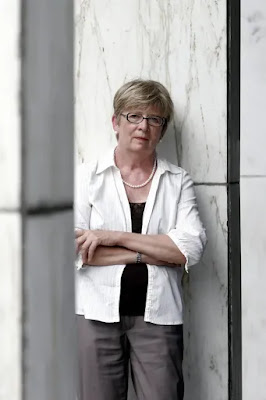 I was very saddened by the news that Barbara Ehrenreich had died earlier this month. She was one of my favourite thinkers and writers, and I found it difficult to bundle my thoughts and feelings into a tribute.

From her last book, Natural Causes: An Epidemic of Wellness, the Certainty of Dying, and Killing Ourselves to Live Longer, I know she rejected continuing with  cancer treatment after a certain point, so it was good to see that she died while in hospice care.

Why did Ehrenreich's writing mean so much to me?

She was a fierce champion of the working class.

She was fearless in her research and her writing.

She was a steadfast feminist, always examining the impact of policies and trends on women, especially working-class and low-income women.

She was clear-eyed and unrepentent. Ehrenreich's essay on the 2000 US election, "Vote For Nader," was widely shared. Then her post-election "Don't Blame Me", in Time magazine, strengthened my admiration for her.

So many supposedly leftist writers will spend 1,500 words explaining why the Democrats suck, why the two-party system is broken, why we need a new or a different party -- then close with some version of "but that's all we got, so just shut up and vote for them". Ehrenreich understood a more complex picture.

I know there's not much point arguing with a party spurned. Scapegoating is, after all, so much easier than thinking. But, dear disappointed Dems, why not vent your rage on, for example, the union guys who voted for Bush because of his easygoing attitude toward firearms? (Oh, yes, I forgot, they're armed.) And before beating up on the Democratic defectors to Nader, wouldn't it be a good idea to pause for a little numerical perspective? According to exit polls, Gore lost 11 pecent of Democratic voters to Bush, compared to only 2 percent to Nader, who also drew votes from Independents and Republicans.

One of the major charges leveled against Nader voters is that we pretended - in some perverse kind of optical malingering - that we couldn't see the difference between the major candidates. Well, I'm capable of making fine visual distinctions. But a lot of people who probably never wandered near the Nader camp kept muttering, "Bush, Gore? Gush, Bore?" right up to election eve. This was, after all, the year the parties did their utmost to resemble one another. Recall that in August, after a Republican convention full of "compassion" and black gospel choirs, the pundits gave Bush high marks for making the Republican party look more like the Democratic party. But how hard was that? He wouldn't have been able to make the Republicans look like the Democrats if the Democrats had not already spent most of the past decade making themselves look like the Republicans - embracing capital punishment, unrestricted trade, welfare reform and the need to abolish the deficit. You call this a two-party system? I demand a recount.

The staggering thing about the Democratic party's sense of entitlement - as in, "We own your vote" - is that it has made so little effort to hold on to its base. Labor, for example. Would there have been any worry about union members' defecting to Nader if the Clinton administration had spent even half as much time fighting to raise the minimum wage as it spent on pushing free trade with China?

So back off, Democratic avengers. Nader didn't steal Gore's election; he just mobilized some of the mounting disgust for money-polluted politics, with its battery-operated candidates and look-alike, corporate-welfare-state policies, whether they're labeled Democratic or Republican. All right, maybe the Republican disguise worked for the Democrats in 1992. But if you go around long enough in camouflage clothes, you're eventually going to be mistaken for, well, a bush.

What I loved best about Ehrenreich's writing was that she wrote for everyone. Although she was a columnist for The Nation, which was (before the internet) the preeminent left publication in the US, most of her writing had a broader target. She wanted to enlighten, educate, and also entertain, anyone who could read her. For me, this put her at the absolute top of the heap of feminist and socialist writers.

A lifetime ago, I saw Ehrenreich read on a double bill with another great feminist writer, Katha Pollitt. When she signed my copy of The Worst Years of Our Lives: Irreverent Notes from a Decade of Greed, she said, "Hardcover! Bless you, supporting my family." Just a tiny personal memory from more than three decades of attention and admiration.

If you haven't read any of Ehrenreich's books, certainly begin with Nickel and Dimed: On (Not) Getting By In America, which has become a classic, then Bait and Switch: The (Futile) Pursuit of the American Dream, and Bright-Sided: How the Relentless Promotion of Positive Thinking has Undermined America.

Barbara Ehrenreich, I will miss your voice.

While we had family visiting, we did a little more exploring of the North Island.

We went to Telegraph Cove, a historic village and tiny tourist resort just south of Port McNeill, which is the easiest place to pick up a whale watching boat, a guided kayaking trip, or similar excursions. There are a few companies doing similar things out of Port Hardy and Port McNeill, but they mostly cater to tour groups. If you're on your own, not with a tour, Prince of Whales is your best bet.

We did the same trip with my mother in 2019, but this never gets old. Since we don't own a boat -- and never will -- I'd be happy to do this annually. We're surrounded by water, but normally can only enjoy it from the shore. It's well worth spending some cash now and again to be on the water.

We had spectacular weather, which certainly increases the enjoyment! The waters of the Broughton Archipelago, just off the east coast of Vancouver Island, are smooth and dark -- rich with organic material that sustains large populations of marine life. We saw a huge number of humpbacks, including two pairs of mothers with calves, copious sea lions, and a raft of sea otters -- dozens of them swimming, playing, and relaxing. No orcas this time, unfortunately, although they have been spotted all summer.

As I've said and written countless times, there is something so magical about seeing animals in their own environments. I enjoy any glimpse of wildlife, but for me, none is more beautiful and mysterious than marine mammals. I am fascinated by their very existence, these creatures with whom we have so much in common, who evolved on land, yet must continually swim to the surface to breathe. Seeing them in the wild is breathtaking.

[While riting this post, I discovered that our photos from the first time we did this, in 2019, were on wtmc but not on Flickr. I'll fix that and post an update.]

On a different day, we visited Little Huson Cave Park, then continued on to the tiny hamlet of Zeballos.

Like most of the accessible sights in this area, the caves are not a big deal, but something to do if you're curious and passing through. Shortly after we moved to this area, we did something called the Alice Lake Recreation Loop, a drive through logging roads with stops at various points of interest. The stops were pretty interesting, if unspectacular, and it was a clever idea to collect them into a driving loop. Little Huson Cave Park was very much like one of those stops -- a short hike into the woods (always nice), some limestone outcroppings known as karst, some caves to look at it. It's not far from the "highway" (Route 19), so might be worth a stop.

Zeballos is a tiny community that was once a gold-mining town. With a population of around 100, it's too small and underserviced to be considered a village. Our library in Port Hardy often donates surplus and discarded books to Zeballos' little volunteer-run library, but I had never been there. No one I know has been there either!

From Route 19, north of Woss, it's about an hour's drive down an unpaved logging road, to a collection of tidy little homes on an inlet. There's supposedly a lodge and a fishing expedition service, but I don't know if either are still active. There is nothing else. (I knew this in advanced and had already told our guests what to expect.) Now I have become the only person in my workgroup to have actually visited Zeballos.

Now that my brother and sister-in-law have visited twice, we may have exhausted all potential sight-seeing in our area. We're not campers and do short day-hikes only, so the options, although beautiful, are limited. Next time they come up from Oregon, we may meet in Victoria.

Labels: animals (other than dogs), vancouver island
Newer Posts Older Posts Home
Subscribe to: Posts (Atom)
As a settler in Port Hardy, I live on the unceded traditional territory of the Kwakwaka’wakw peoples, whose historical relationships with the land continue to this day.