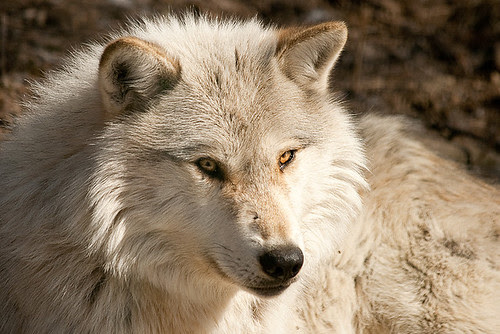 In the summer of 2009, Allan and I and two friends went to the Haliburton Forest Reserve Wolf Centre; my post about it is here and a small sample of photos from that day are here.

We all love animals, but J is extremely knowledgeable about animals and shares my fascination with wild canines. (These are the same friends with whom we've visited Jungle Cat World more than once.) Driving back from Haliburton that day, we vowed to return in winter, when the wolves are more active and sporting their gorgeous winter coats.

Last year we were all set to go, when we discovered that the Wolf Centre is only open on weekends through the winter, when I'm working. Well, this winter I couldn't stand it anymore, and used a vacation day. Allan and C couldn't make it, but J, CB and I had a great day - driving and talking, and marvelling at the wolves.

There are only four wolves now. Smudge, the old alpha male we saw in 2009, has died. Citka, the former alpha female, died carrying a litter of pups. Now Granite is the only female in the pack, and the alpha female by default. Cedar and Haida are the alpha and beta males, and Grisham (who I thought was named Grissom, until I saw the name on the website) is the omega.

The best news is that Granite is now pregnant. The pups are expected in April, so yet again, we came home promising to return. We will be watching the Wolf Centre website closely. If all goes well and healthy pups are born, we'll return in June to see them.

Our visit in late March was amazing! The wolves were spectacular in their thick, full coats, but what we were most hoping for was to see them fed. The wolves are fed only every 7 or 8 days, to more closely mimic their diet in the wild, and at irregular intervals, so they don't anticipate feeding time the way domestic and zoo animals do. (The irregular schedule is also so visitors don't anticipate feeding time and mob the centre on those days.) So if you visit, feeding time may or may not fall on a day when you're there. J and I were so hoping to see it... and we did!

Here's some of our day, with photos by J. CB had her video camera, so I hope to post a clip, and you'll be able to hear the wolves vocalizing.

When we arrived, the four wolves were lounging in the viewing area, enjoying a lazy morning in the sun. Every once in a while, one would get up, stretch, yawn, and find a different spot. As soon as one got up, the others would follow, so there'd be a kind of slow-moving musical-chairs as the wolves changed positions. 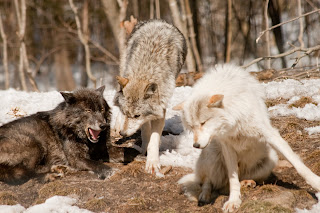 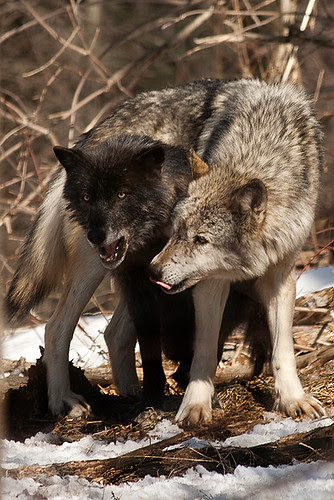 The Centre guide pointed out how the female was walking gingerly on the snow, careful not to slip because of the pups growing inside her. He said that in a few weeks she would start to show thickening around the middle. 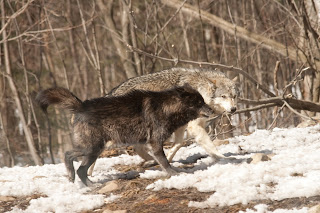 We watched this for a while, took a walk through the Centre's little exhibit space, then patiently sat and watched the wolves some more. When we first arrived, we were the only visitors there, but during the day several groups came in. (Once we had to retreat to an unheated viewing corridor, to escape obnoxious snarky comments.) Every time cars would pull up or when the Centre door opened, the wolves would become more active - playing a little, prancing around, nuzzling each other, vocalizing - then eventually settling down. 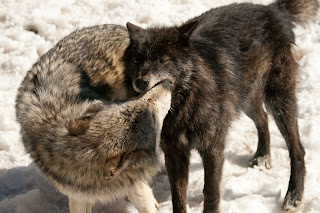 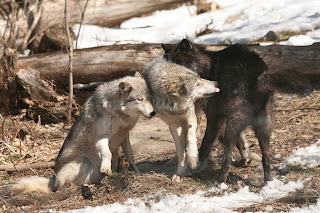 As the day went on, these spurts of activity lasted longer and longer. Each time, the wolves would get a little more active and noisier, and take longer to settle down. We started thinking that they sensed they were going to be fed.

It was really interesting to watch Grisham, the omega wolf, during these times. The other three would squeeze their snouts together and prance around. Grisham would keep his distance, paw at the snow, get a little frisky - but always by himself. 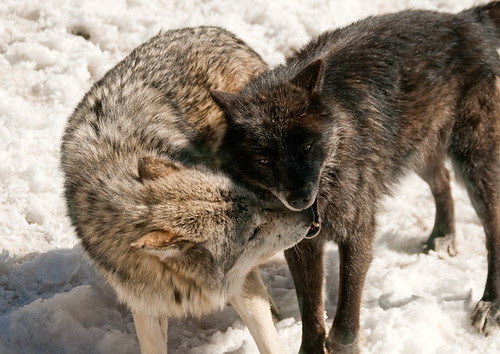 At one point, Granite climbed a little further up the slope, lay down on a big boulder from which she could survey the whole area, and waited. The rest kept prancing around. The vocalizing got really noisy! (There are microphones on the outside of the building.) They weren't howling; it was more like sustained whining, a chorus of all different pitches. Sometimes the whining would almost become a howl, but not quite. It was a sound you'd never hear in any other context - something altogether wild. 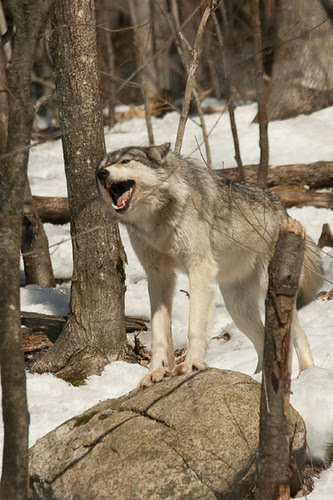 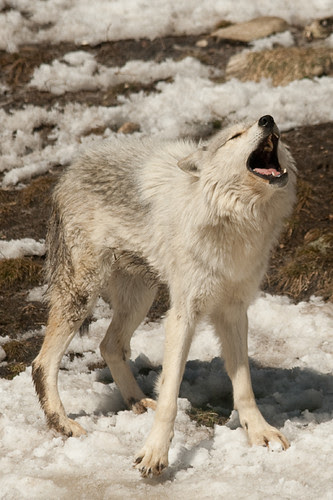 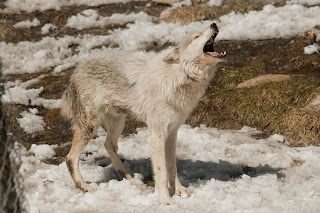 The activity kept increasing - the wolves growing noisier and more active - and then all movement stopped. All four wolves stood still, staring, completely focused on the building's basement windows. The Centre has two-way glass - so you can see out, and the wolves see a reflection of the woods. But when the light changes inside, the reflection decreases, and the wolves are very sensitive to it. They obviously know that a certain pattern of movement in the basement means food is on the way. 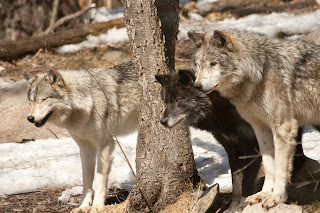 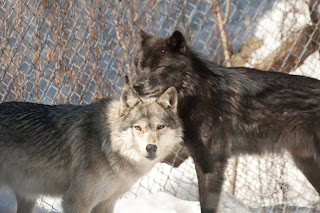 Two men - the guide we had been talking to and one other - entered the enclosure, each holding one huge, red hunk, roughly cylindrical. We already knew these were beaver carcasses, caught by trappers, stripped, and sold to the Centre, where they are kept frozen. Beavers make up 75% of the wolves' diet.

It was fascinating to see how the wolves reacted to the men in their enclosure. The wolves left a buffer zone between themselves and the men; when the men took a step forward, the wolves stepped back. One man dropped a carcass and went back inside for another, and even with the food on the ground, the wolves would not approach and eat, as long as the human was standing near it. The alpha and beta wolves would stand a few feet back from the men, while Grisham trotted back and forth, even further away. 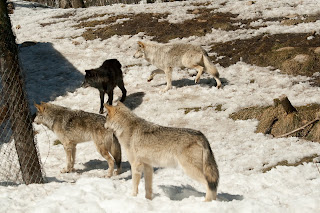 The men secured two carcasses with wire to some tree stumps. When Granite trotted off with a big hunk of beaver, we understood why. Without that, visitors would see the wolves eat for about 30 seconds! 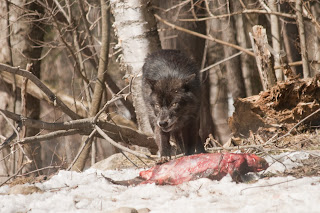 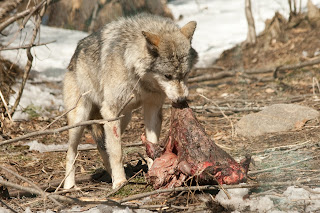 We watched three of the wolves tear into the meat, gulping it down, faces and forelegs getting bloody, loud munching and gulping noises coming over the mics. Grisham trotted back and forth, not approaching any of the carcasses while other wolves were busy with them. After some time, Granite disappeared with her prize, Haida trotted off with a tail - they love the tail! They walk around with it sticking out of their mouths, very amusing - and Ginger was occupied with a large bone. Only then could Grisham eat. 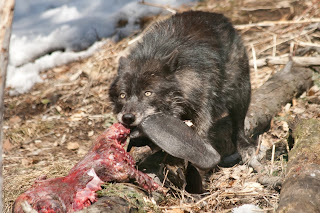 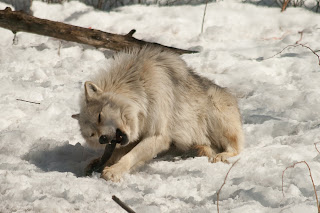 Almost as soon as the beaver carcasses appeared, ravens swooped into the enclosure, waiting impatiently on branches for their moment. They looked exactly like crows, but way larger. The guide told us that ravens are the wolves of the bird world, the top of the food chain. They will chase away any other bird, even gang up on a hawk, picking at its tail feathers until it gives up and flies off.

Later, when the wolves are asleep, raccoons, mice and other small animals will tunnel under or climb over the enclosure fence to pick the bones clean. 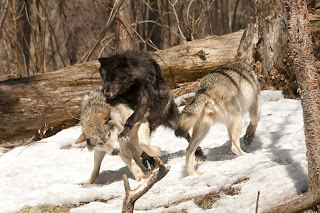 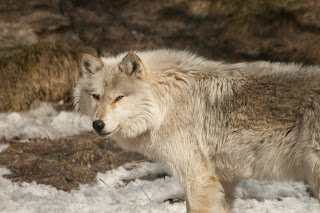 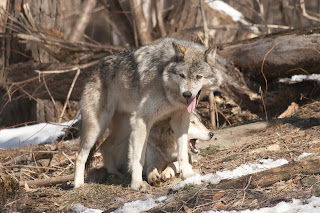 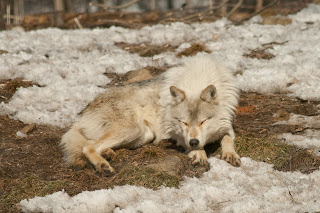 With any luck, my next Wolf Centre post will include puppies!