how do we feel about the conservatives being caught with their pants down on the eve of the leaders' debate?

How happy are we about yesterday's leak of the Auditor General's report and the revelations that the Conservatives lied about Sheila Fraser's statements?

Hurrah for Joan Bryden and double hurrahs for whatever partisan angel leaked the Auditor General's report. And a special hurrah for the Conservatives' unlimited hubris and appetite for deception, which gave them the temerity to recycle and misuse Sheila Fraser's quote! Yes, chalk one up for Mr. Transparency and Accountability. This one is a bit difficult to spin away.

And it suggests the process by which the funding was approved may have been illegal. ...

Among the questionable projects funded were:

The Star already revealed ahead of the twin summits last summer that much of the $50 million meant to spruce up the Huntsville location of the G8 went to irrelevant projects like gazebos and to raise sidewalks high enough to bury a fire hydrant far away from where the world leaders met.

[T]here was no apparent regard for the needs of the summit or the financial guidelines laid down by the government.

Much of the $50 million the Conservative government allocated to the G8 Legacy Infrastructure Fund went to projects in Hunstville, Ont. that had nothing to do with the summit, according to newly released documents. . . .

The 32 projects that received funding, many of which appear to have no connection to the needs of the G8 summit, were chosen by Industry Minister Tony Clement, the mayor of Hunstville, and the general manager of Deerhurst Resort.

On the shores of Georgian Bay, an hour west of the big world leaders' summit in Huntsville, the downtown sidewalks and fountain built with federal G8 funding are finished. . . .

Construction crews didn't raise a fire hydrant when they raised the level of a main downtown street and sidewalk ... the bright yellow hydrant sticks only about a foot out of the ground. A little low. ... 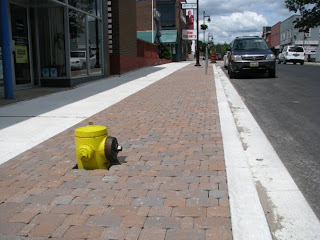 On a day when a $1.9 million "fake lake" in the G20 media centre in Toronto had opposition MPs and taxpayers crying foul, a quick spin north of the city revealed that almost everything north of Barrie was getting an upgrade — or so it seemed — for a summit that will last a matter of hours.

New sidewalks, trees, gazebos, paved roads, fresh coats of paint, gardens and all manner of buffing and polishing, all compliments of federal largesse, much of it for tiny towns well off the beaten track. . . .

Liberal MP Siobhan Coady: "(Taxpayers paid) $1.1 million for a sidewalk that is 84 kilometres from the summit site."

Ms. Fraser criticizes the government for a lack of openness toward Parliament, which unwittingly voted for the program as part of a border infrastructure initiative. . . The draft report also leaves the Harper government exposed to charges of financial mismanagement in the $50-million program, which had a budget 10 times higher than the funding allocated to major summits in Quebec City and Kananaskis, Alta. ...

The Auditor-General found no one in government who could explain how the funding was allocated.

[T]he Conservative government failed to adequately keep records to explain how the 32 projects were chosen for Parry Sound-Muskoka, the southern Ontario riding represented by Tony Clement, the industry minister.

The federal campaign was hit with a bombshell in media reports that said Sheila Fraser concluded in a draft audit prepared in mid-January that the government had misinformed MPs and perhaps had even broken the law through the way it sought funds in late 2009. ...

[Conservatives] folded the $50 million into a larger, $83-million category, which was described as a Border Infrastructure Fund ... with no mention made of how much of the money was actually going to Parry Sound-Muskoka, which is nowhere near the border.

Auditor General Sheila Fraser is rebuking the Conservatives for using an old quote of hers praising the Liberals as proof she approved of last year's G8/G20 spending by the Tories.

In another twist in the summit spending uproar, Fraser is demanding that the quote cited by the Tories be removed from a recent report by a Commons committee that studied how the Harper government spent $1.2 billion on the Muskoka and Toronto summits.

"We found that the processes and controls around that were very good and that the monies were spent as they were intended to be spent," Fraser is quoted as saying in the dissenting report written by Conservative MPs on the committee.

But Fraser says bluntly in a letter to former chair and Liberal candidate John McKay that the quote had nothing to do with last year's summits. It was taken from a 2010 media report referring to the auditor general's assessment of national security spending by the Liberal government in the wake of Sept. 11, 2001, she says. ...

[Fraser also pointed out] that she did not give testimony before the Commons government operations committee during its investigation of G8/G20 spending ...

All this happiness over what may or may not be a turning point in the election? Yes, and why not! Imagine how we'll celebrate on the night of May 2 if we've seen the end of the Harper Government™!