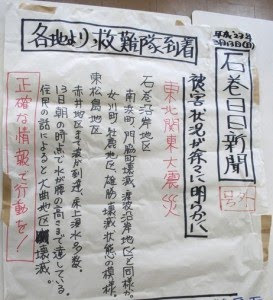 In the wake of Japan's recent massive earthquake and accompanying tsunami, the daily Ishinomaki Hibi Shimbun, based in Japan’s Miyagi Prefecture, found itself without power. So it produced new issues during a crucial time using what was available to editors – paper, and pen.

For six days, six of the paper’s staffers researched stories before passing them on to three others, who then meticulously hand-wrote the news on poster-size paper, using flashlights when natural light was not available. These “newspapers” were then published, so to speak, by pasting them at the entrances of various relief centers, so that survivors could keep up to date with the day’s headlines, free of charge.

What a beautiful throwback to a time when newspapers were the only source of information about the outside world. I found this not only extraordinary for its low-tech resourcefulness, but also moving - that journalists and editors, as providers of information, would take their roles so seriously. We all know that in times of crisis, if our basic needs are met - and sometimes even when they aren't - the thing we hunger for most is information.
Posted by laura k at 4/17/2011 05:15:00 AM