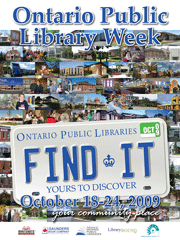 This annual fall event focuses on promoting public libraries in Ontario. A strong library system is the foundation of a strong community. With more than 1,100 service points throughout the province, public library members make 66 million visits to local libraries across Ontario each year. And now virtually every library branch provides access to electronic information through the Internet.

You know, I'm really excited about being a librarian one day. How that's going to work with being a writer, I don't know. That's a topic for another day, a post I'm trying to write, on which I probably won't be able to concentrate until winter break. My list of Things To Do Over Winter Break is becoming unrealistically long, considering I'll also be in dire need of down-time. [I repeat: a topic for another day.]

James sent me this, via BoingBoing. 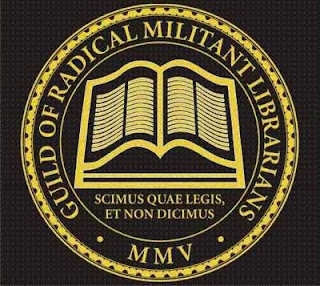 It's from a PATRIOT Act protest t-shirt. The Latin translates as:

We know what you read, and we're not saying.

That's something I'm excited about, too: being part of a profession that actively stands up for privacy and intellectual freedom. In the US, librarians are on the forefront of resistance to government surveillance of citizens' research and reading materials; the ALA has been fighting the so-called PATRIOT Act since its inception. [In case you thought the PATRIOT Act was history: think again.] The piece most near and dear to librarians' heart is Section 215, but the whole thing needs to be - and probably won't be - drastically overhauled scrapped.

Erica Olsen of Library Avengers explains "why you should fall to your knees and worship a librarian":

Ok, sure. We've all got our little preconceived notions about what librarians are and what they do. Many people think of them as diminutive civil servants, scuttling about "Sssh-ing" people and stamping things. Well, think again buster.

Librarians have degrees. They go to graduate school for Information Science and become masters of data systems and human/computer interaction. Librarians can catalogue anything from an onion to a dog's ear. They could catalogue you. Librarians wield unfathomable power. With a flip of the wrist they can hide your dissertation behind piles of old Field and Stream magazines. They can find data for your term paper that you never knew existed. They may even point you toward new and appropriate subject headings.

People become librarians because they know too much. Their knowledge extends beyond mere categories. They cannot be confined to disciplines. Librarians are all-knowing and all-seeing. They bring order to chaos. They bring wisdom and culture to the
masses. They preserve every aspect of human knowledge. Librarians rule. And they will kick the crap out of anyone who says otherwise.