why we love greenpeace

Greenpeace rocks, and in this article, so does the Toronto Star. 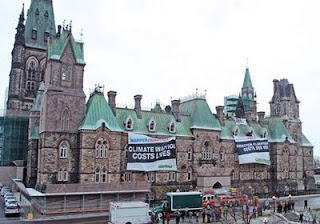 Twenty activists from Greenpeace have been arrested after they breached Parliament Hill security and unfurled giant banners blaming politicians for failing to tackle global warming.

At 7:30 a.m., 19 Greenpeace protesters scaled the roofs of two buildings where federal MPs come to work each day. Five were quickly arrested when they displayed small banners just east of the Peace Tower, said Jessica Wilson, a Greenpeace spokesperson.

The job of bringing down the remaining 14, including six dangling from ropes on the roof of the West Block, home to politicians' offices, took a little longer. In the end, all 19 plus one organizer on the ground were arrested.

About 90 minutes after they set up, then dropped massive white sheets that read: "Harper/Ignatieff: Climate Inaction Costs Lives," Ottawa police and Royal Canadian Mounted Police officers arrested a number of spotters perched on the roof. That left six hanging on the walls beside the banners.

They wore yellow and orange hard hats and blue overalls identifying them as members of the "Climate Rescue Team."

Fire crews first cut down the banners before starting the laborious task of bringing each activist down with an aerial ladder, one that was just wrapping up shortly after 10:30 a.m. as the protesters were lifted down to the ground to cheers from a number of onlookers.

An RCMP spokesperson, Cpl. Caroline Poulin, spoke to reporters directly in front of where the protest was taking place, but could not offer much detail on how the activists scaled the supposedly secure building. She said that charges could include mischief and trespassing.

The Ottawa event was designed to put pressure on federal politicians as a global climate change summit opened across the Atlantic Ocean in Copenhagen. There, 192 countries are attempting to reach agreement on a plan to cut the world's emissions of greenhouse gases.

Prime Minister Stephen Harper, whose climate policy is designed to allow the continued expansion of energy production in Alberta and Saskatchewan, is a well-established target for environmental protesters. Liberal leader Michael Ignatieff has been applauded by the environmental movement in Canada in the past for proposing, during the party's 2006 leadership campaign, to implement a carbon tax. But since taking leadership of the party one year ago, his intentions have become fuzzier, Wilson said.

But Ignatieff said today that the protesters have it wrong about his party's position on climate change, which he says is far more ambitious than the Conservative government's proposals.

"Look, we've proposed an extremely ambitious cap-and-trade system, based on 1990 targets, with Canada as a leader to make sure our climate doesn't go up above two degrees (Celsius).

"We've proposed a huge set of initiatives in respect of protecting the boreal forest, protecting our water," Ignatieff told reporters. "It seems to me we've got our act together."

The protesters are right, however, Ignatieff said, to point an accusing finger at the Prime Minister and the Conservative government.

Ignatieff said he could not endorse the tactics of the demonstration.

"No one can approve of what they've done and we will have to ask those who are responsible for parliamentary security to explain."

Greenpeace has achieved a sort of fame over the years for their in-your-face approach to protesting. Members have displayed their messages from the CN Tower in Toronto, oil sands operations in Alberta and giant bridges across the country.

This was a first for Parliament Hill, though in October a Greenpeace team in London scaled the rooftop of the British Parliament with a similar message.

Thirty protesters camped out on the Palace of Westminster overnight, snacking on energy bars, and waited for British politicians to return from their summer break before starting their show.