the wolves of haliburton ontario 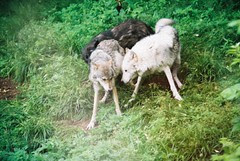 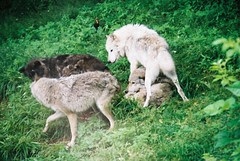 We left very early in the morning, driving about three and a half hours north and a bit east, and arrived shortly after the Centre opened.

A 15-acre enclosure of land - a piece of the Haliburton Forest Reserve - is home to a pack of wolves who live and breed in a semi-wild setting. The Wolf Centre is a small wolf-education museum with windows that overlook a clearing on the edge of the enclosure. The wolves come to the clearing to relax, play and eat.

When we got there, five of the six wolves that currently comprise the pack were there, curled up or sprawled out in little depressions they've dug out for themselves.

The Centre guide pointed out the alpha male - a big, white, older male lying apart from the others - and the younger wolves, telling us their names and their status in the pack. We learned that the alpha female had died two months earlier, while carrying six pups. She had a tumour (which also explained why she hadn't bred the previous year). She appeared to be going off to give birth, but was found dead, and staff was unable to save any of the pups.

Within days, her daughter took over as alpha female. Now the staff sees signs that two younger males have begun to challenge the old alpha male. The staff expects to see a changing of the guard this winter.

While the guide was talking, the sixth wolf wandered out of the woods, and all the wolves started to play. It was amazing to see.

Anyone who has read about and observed dog-pack play, would recognize all the behaviour. In fact, Allan said he had to remind himself that these weren't actually dogs - the behaviour is that familiar to us.

After a while, the wolves settled back into their lounging positions, some lying right near each other, others a bit further off, all six visible to us.

We all checked out all the information in the small museum part of the Centre, going back to the windows every so often to see if the wolves were active again. We had a picnic lunch outside, then attempted a short hike in the nearby woods, but were driven back by mosquitoes.

Afer lunch, we watched the wolves again and were lucky enough to see another play time. Two wolves were play-fighting for the same sleeping hole - one would be lying in the hole, and another would walk over and lie right on top of him, trying to get him to move. Eventually they lay beside each other, and one continually slapped the other's head with his paw.

We saw lots of dominance gestures, like one wolf standing above another, straddling it. I recognized the younger wolves greeting the alpha with kisses or nips on his snout from below - their heads lower than his - with their tails wagging submissively. We also saw the bottom wolf get chased out of a sleeping spot, her head down, tail between her legs, slinking off to find another place to lay.

We took tons of photos. Our higher-quality camera is not digital (yes, we still shoot film!), so it will be a few days before I can get the pictures up.

The Centre can't guarantee you will see wolves - it's not a zoo - but if it's not very hot out, it's likely you will. In 2008, there were only eight days that wolves were not seen. (Not fun for the employees dealing with disgruntled visitors.)

The Centre gets practically no visitors in the winter. We instantly decided to go up again for a mid-week winter trip.

I had been under the impression that the wolves are fed at regular times for the public to view, but the guide explained that the Centre purposely doesn't do that. They don't want the wolves to become conditioned to regular feeding hours as domestic or zoo animals do.

Food - usually beaver carcasses that are bought from trappers, but sometimes deer or moose roadkill - is brought in at irregular times. Wild wolves can eat as much as 20 pounds in one feeding, then not eat again for a week, so the Centre seeks to mimic that as much as possible. Live animals are not brought in. The wolves live in an enclosure, so the animal would have no chance to escape, making that option unethical.

From the observation area, you can see white bones and bits of bone scattered around, especially several intact jaw bones with teeth still in them. The guide told us when the wolves are done feeding, the bones are completely clean, as if they were washed and polished.

As a visitor, there is a slim chance that you'll see the wolves eat, but it's unpredictable. Our guide related a story of a viewing area packed with people just as a deer carcass was brought in the enclosure. When the alpha male grabbed the carcass by the head, dragged it on the ground and stripped the hide off the entire body in one rip, the front row of visitors cleared out in 30 seconds, everyone turning green. But J and I immediately said, "Oh man, I'd love to see that!"

I can only hope to see something like that when we go back this winter.

After a while, with many hours of daylight left and no pressing need to get home, we asked around for something else to do in the area.

We managed to find - no thanks to the ridiculously bad directions we got at the Visitors Centre - the Haliburton Sculpture Forest. On a trail through a wooded section of a park, there are around 20 sculptures. Some comment on, or echo, or provide an unusual juxtaposition with, the surrounding nature. I liked some of the work, but for me it doesn't matter if I love the art or not. I really enjoy sculpture, especially large pieces in a garden or natural setting. I just love the idea of a sculpture park or garden.

[If you are ever in New York State's Catskill Region, I highly recommend a visit to Storm King Art Center, an amazing outdoor sculpture park, and a favourite place of mine.]

The Haliburton Sculpture Forest won't change your life, but it's a pleasant and interesting stroll if you're in the area.

On our way home, we stopped in Barrie, a small city on Ontario's Lake Simcoe, kind of the gateway between the more populous southern Ontario and the more rural north. (When I first moved here, a contemptuous commenter predicted I'd "never go anywhere north of Barrie".)

The tail end of a street fair was just closing up - a good excuse to eat some delicious, disgustingly unhealthy food - then we strolled along the waterfront in a beautiful park. On Barrie's website, I see the town has several waterfront parks; it looks like this was Heritage Park. It had rained off and on all day - fortunately only when we were driving - but for our little walk, the sun was out and sparkling on the bay. It looked like a nice little downtown and we saw lovely small houses and yards while getting lost trying to find our way back to the highway.

In addition to the wolves, we had several other wildlife sightings. C and J saw a very large deer, I saw a red fox, and in Barrie we all watched a mink scamper along the rocks on the water's edge. I would have guessed it was a weasel, but J identified it as a mink. [I had previously written that a mink is a rodent, but commenters tell me it is a mustelid.]

The animal was so fast and nimble, zipping in and out of the rocks, sometimes swimming (startling some ducks, who swam quickly away). It was really cute, too, with an alert little face, and seemingly unafraid of humans. And small. Seeing how small these things are, it's even more horrifying to think of how many mink pelts it takes to make one coat for a human.

I've mentioned how I love that nearly everyone, almost universally, enjoys seeing wild animals. There's just something about unexpectedly observing animal life going on around us that is such a joy. I've never met anyone who didn't respond to it. So this was a fun wildlife-sighting day, and it was a huge treat and privilege to see the wolves.

Our domestic canines had to be left home for this trip; we had dog-care for the day. C and J are among the friends who have helped us with emergency dog-care, so we all enjoyed imagining how Tala would react in the Wolf Centre. Not to mention the three and a half hours of non-stop barking and spinning on the way up!

For more information and thoughts on wolves, and how these magnificent creatures are threatened, click on the category animals (other than dogs) and scroll through.