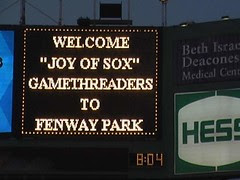 We had a great little trip to Boston, marred only by the outcome of the baseball games. The Red Sox split a series with the Oakland A's, winning two games and losing two. Did they have to lose the two games we saw?

The first loss - the Joy of Sox gathering game - was particularly brutal, as the Sox were ahead and should have had the game well in hand, but our once-great closer blew the lead. The Sox lost 9-8 in 11 innings.

The second game was no picnic either. On the first pitch of the game, an Oakland hitter smashed a home run, and it was downhill from there. By the time the Sox came up to bat, they were already down 5-0. They clawed their way back, but too little, too late, and ended up losing 8-6.

Our first time at Fenway in four years, and who knows when the next time will be, and we see two losses. That's baseball for ya.

Other than that... It was amazingly wonderful and wonderfully amazing to meet in person good friends who we've known online through Joy of Sox, and for all of us to attend a game together. Allan and I had some surprises for the group - a commemorative program we made, and a Joy of Sox crossword puzzle made by another gamethreader, plus the group's name on the scoreboard (above).

Many of us gathered at a pub before the game, then some of us also went out after the game. We were all really happy. I hope it's the first of many games we attend together.

We also did a little walking and exploring in Boston, which we haven't done for a decade or so. From our hotel near Fenway Park, we walked down to the Charles River, across to the Cambridge side, down along the river, then back over to Beacon Hill, through Back Bay, and back to the hotel.

Time was, I would have brought along a guide of some sort, and checked out various architecture and landmarks along the way, something I like to do in whatever city we're in. But either I've been too busy or I've gotten lazy, as I'm much less inclined to do that kind of planning anymore. This may be a fallout of the constant information overload of the internet age: when we take a walk, I don't want mental stimulation, I want mental relaxation.

On the Cambridge side, however, I noticed we were passing MIT, and suddenly remembered there is a Frank Gehry building on the MIT campus, long on my list of things to see. We wandered onto the campus with no idea where to go, and the building practically appeared in front of us. I was all kinds of pleased with myself. It's the Stata Center: some online pics here, here, here and here. There also seems to be an abundance of public art on the MIT campus: in a few minutes, we passed sculptures by Henry Moore, Alexander Calder and Louise Nevelson.

The only reason this walk was pleasant - or even bearable - was its proximity to the river. It was very hot and humid, and as soon as we ventured a bit inland on the Boston side, we were collapsing. After resting a bit on Boston Common - the oldest park in the US, and one of the oldest settled places in North America - we continued on. We stopped at the Boston Public Library just to take a peek in and grab some air conditioning, but stumbled on an exhibit of old area maps, and spent a while with that. Old maps rock.

On the way back towards the hotel, we stumbled on something even more welcome: a lovely bistro, nearly empty, with very cold air conditioning. A cold glass of Reisling, chilled asparagus soup and rosemary-garlic frites, and I was much better. Back at the hotel, we needed showers and a nap before the game.

On our drive home, we learned David Ortiz's name is on "the steroid list" and the Toronto city workers won their battle, pending approval by the Toronto city council. It's also a big day for baseball fans: trade deadline day. I'm still catching up. See you later.
Posted by laura k at 7/31/2009 06:00:00 AM