There is so much truly excellent youth fiction out these days, and it's not all vampires and zombies. Here are two wonderful teen novels in two totally different veins. 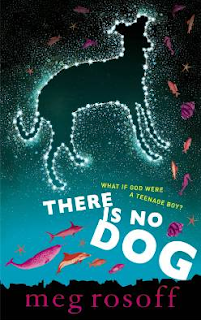 Like many excellent novels, Meg Rosoff's There Is No Dog defies easy classification. It's a comedy, but it's heartbreaking. It's a fantasy involving gods and goddesses with power over life and fate, but it pokes holes in the peculiar fiction known as religion. It's about the mysteries of falling in love, and also about the mystery of being alive.

There Is No Dog imagines God as a teenage boy. Like many teenagers, God is self-centered, forgetful, narcissistic, lazy, unfocused, and impulsive. Unfortunately, he is also incredibly powerful. If God runs a bath then forgets to turn off the tap, hundreds of thousands of people perish in a flood. When God scowls and pouts because he can't convince a young mortal to have sex with him, fierce storms and unexplained phenomena rock the world. God is no longer allowed to help himself to any mortal woman he desires, but there are allusions to Leda (rape by Zeus as swan), Europa (rape by Zeus as bull), and similar victims in the mythologies of other cultures. Now teen-boy-god just seduces mortal women with his (literally) irresistible charm.

Teenage-boy-god inhabits a world full of other gods and goddesses, most of whom are monstrously selfish, self-absorbed, violent, uncaring, and impulsive. They gamble and squabble amongst themselves, while their mortal creatures in various galaxies suffer the consequences. It's screwball comedy, but with an underlying sadness.

Back on Earth, an average teenaged girl is in love, a mother is over-protective, a zoo is drowning, and a minister feels - and is - helpless. The vision of the selfish, arbitrary, and all too flawed deities, juxtaposed with the modern minister overwhelmed by his congregation's fears raises questions about faith, belief, and the existence of a higher power - questions that are never directly posed, only implied.

I was particularly impressed by a youth author raising profound existential questions with her readers. Humans represent the gods' worst error: a mortal creature who knows its own mortality. All creatures die, but only humans know that they die. And we must figure out how to live with that knowledge, and continue to live, despite it.

This is a funny, profound, and beautiful book. 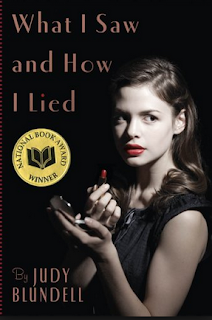 In What I Saw and How I Lied, Judy Blundell folds a classic coming of age story into a historical context, then surehandedly builds suspense to turn the book into a convincing thriller.

Fifteen-year-old Evie falls in love with a worldly 23-year-old. If that isn't recipe enough for heartache, Evie begins to discover that her parents are not who they appear to be. Neither is the postwar America they all live in, a land of peace and prosperity, unless you happen to be black, Jewish, a single mother, or anybody else who doesn't conform. Evie's discoveries about her mother, stepfather, and the man she longs for are echoed in her discovery of the injustices - and hypocrisy - that remain after the "good guys" won the war.

What I Saw and How I Lied is full of suspense and mystery, but is more about dizzying first love, the confusion of realizing your parents are merely human, and the pain of growing up. A terrific, complex, authentic novel.
Posted by laura k at 7/20/2013 11:00:00 AM