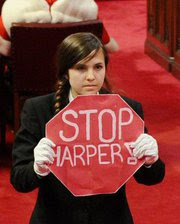 This week, pollster Nik Nanos revealed that 51.5% of Canadian voters would not consider voting for the Conservative party, compared to 36.4% only seven months ago.

I don't play the national pastime - election prediction - so I won't speculate about if or how this poll will translate on the ground. Whether we'll have to wait until 2015 to get rid of this corrupt, fraudulent, anti-democracy, anti-human, anti-labour, anti-environment, corporate government - and whether Canadian voters will be hoodwinked by another party with almost identical policies but a friendlier face (and famous last name) - remains to be seen.

Meanwhile, all we can do is educate and mobilize. In Egypt yesterday, nearly as many people as live in our entire country were in the streets, demanding the "president" resign. In Brazil, people who live in the vast favelas (shantytowns) joined the massive, ongoing protests that overshadowed the football tournament. Compared to these inspiring examples, the organizing in Canada is microscopic. On the other hand, 2012 National Stop Harper Day saw events in 11 cities; this year that number is 22.

Some sources give June 28 as National Stop Harper Day and July 1 as Save Canada Day; others only use the July 1 date. I'm just glad people are organizing. One way to get involved is to support the Democracy 24/7 campaign. Demand fair elections. That would be a start.
Posted by laura k at 7/01/2013 05:30:00 AM