"sharecroppers on wheels": port truckers are organizing, and they are winning

When is an employee not an employee? The answer to this riddle is rapidly becoming the true face of employment in the North America today.

In her brilliant investigative book Bait and Switch, Barbara Ehrenreich writes about "jobs" that require scare quotes. These "jobs" provide no salary, no benefits, and no workplace. In most cases, the "employee" finances the most basic tools of the trade out of their own pockets. Real estate agents, insurance salespeople, and cosmetic salespeople often fall under this category. You might be surprised to learn that many truckers do, too.

They are called "port truckers," and they haul freight from ports to stores like Wal-Mart and Starbucks. Since the deregulation of the trucking industry - under President Carter, a Democrat - port truckers have been classified as independent contractors. The International Brotherhood of Teamsters says that the majority of port truckers (more than 80%) are wrongfully denied employee status.

Employee status would lift port truckers out of poverty, and - perhaps most importantly - give them the right to unionize. Is it any wonder the companies that profit from the truckers' labour use the fiction of the independent contractor?

Josh Eidelson has been writing about this on AlterNet, The Nation, and In These Times.

As I’ve reported, port truckers charge that their status comes with all the downsides of employment — the companies they work for set their compensation and regulate their work — and little of the upside. Most port truckers pay for their trucks (sometimes leasing them from their bosses) and the fees and upkeep costs that come with them, get paid nothing for the extra time they spend idling in traffic and have no legal right to unionize. Such a “Who’s the boss?” problem has become increasingly prevalent for US workers, as increasing numbers are cast among the ranks of temps, informal workers or independent contractors lacking the legal rights of employees — including collective bargaining.

Citing a series of public and private sector studies, a spokesperson for the federal Department of Labor told The Nation in an e-mail that the “numbers suggest that misclassification occurs in significant numbers and, across the country, workers are finding themselves without the basic protections that Congress has enacted to ensure they receive fair pay, safe workplaces, and necessary supports when they are hurt or lose their jobs.

The old sleight of hand called independent contracting keeps each individual trucker powerless against the mega-corporation that pays him. Teamster Vice President Fred Potter calls them "sharecroppers on wheels".

The Teamsters and organizations like Change To Win intend to change that. Change To Win's campaigns include Wal-Mart workers, warehouse workers, port truckers, and farm labourers - an increasingly huge portion of the North American labour force, most of whom also wear that unconscionable label: the working poor.

Port truckers are determined to change their working conditions, and to reach out to their sisters and brothers in the same situation, and help them change their lives, too. Eidelson reports:

"The same day that the Teamsters won their New Jersey election, workers at the Port of Los Angeles filed the latest in a slew of wage and hour claims against port trucking companies operating in California. The claims allege that companies have illegally misclassified workers as independent contractors, denied them the wages they would legally have been entitled to as employees, and subjected them to payroll deductions that could not legally be required of employees. Following know-your-rights meetings organized by the Teamsters and the Los Angeles Alliance for a New Economy, over 400 such claims have been filed in California — some by the Teamsters, other by private attorneys. Combined with eight potential class action lawsuits, the union says the industry faces a potential liability of $100 million.

These organizing, legal and political efforts are designed to reinforce one another. Potter said that legal action “puts pressure on them to change their business model, and not misclassify workers. That will open the door for the workers, properly classified [as employees], to then seek union representation.” He predicted that evidence of rampant lawlessness would also hurt trucking companies’ relationships with the major chains that hire them. Votes to unionize by port truckers could also strengthen the case that members of the allegedly misclassified majority should have the chance to do the same. 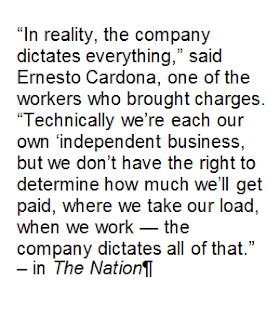 The most dramatic attempt at such synergy took place in 2011, when port truckers staged a strike in Washington state, driving off the job in protest of alleged retaliation and massing at the state capitol to demand passage of an anti-misclassification bill. While the drivers successfully slowed the pace of Seattle’s port, the bill died in the State Senate after passing the House. Asked about that defeat, Potter said, “The industry showed up in force.” However, he said, “That bill is not dead to us.”

As new union members in an overwhelmingly non-union industry, Toll workers in California and New Jersey now have the opportunity to help organize peers at other companies. The campaign acknowledges that the higher standard it’s achieved in the Los Angeles Toll contract —w hich it says doubles workers’ hourly pay — won’t be sustainable unless some of Toll’s competitors follow suit. Indeed, that contract has language committing the Teamsters to organize currently non-union workers at other companies as well.

Schmitt told The Nation that as he and other Toll employees run into drivers from other companies at the Port of Newark, “they’re asking us questions. People are congratulating us on the victory. I guess once we get a collective bargain agreement, and the word is out, don’t be surprised that they would probably want to form a union too.”