Summer is the busiest time of year in the Central Children's Library. Actually, we are wildly busy any time school is out; the summer is just the most sustained period of busy-ness. Many of my colleagues have been preparing for summer programming since the end of March Break.

All through July and August, in libraries throughout Canada, kids will be participating in Summer Reading Club. The program uses incentives, activities, and fun programs to keep kids reading over the summer, which has been shown to improve their performance in school. It's fun, and it's free.

All Canadian libraries receive the same materials, which is really nice - kids can participate while they're visiting relatives or at a cottage with their family. But libraries plan their own programming, so we can be as creative as we want and can afford. 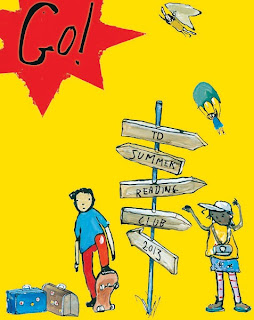 (The official name is "TD Summer Reading Club". It's designed through a partnership among Library and Archives Canada, Toronto Public Library, and TD Canada Trust. I grit my teeth through the corporate sponsorship, but the name... argh.)

Registration for Summer Reading Club began on July 2, and by July 4, we had signed up 180 kids. Each child receives an activity book, and a "passport," in which they'll record the titles of the books they read. They each write their name on a cut-out shape, and tape the shape to the wall. Each time they check in to report on their reading, they earn stickers, and their name goes on another cut-out shape on a different wall. The stickers tie in to a website, where more prizes are unlocked. The goal is registration, plus three reporting visits, earning a total of nine stickers.

In addition to all the reading and reporting, kids are invited to club "meetings": special programming every week. This past week for the big kickoff, we were outside on Celebration Square - a big public space adjacent to our library - playing games. After a rousing intro, the kids were divided up into teams, and teams rotated through six "stations," playing a different crazy game at each. With my broken foot, I was given a station with a canopy (shade!) and did a variation of Simon Says where the kids took turns leading the game.

The SRC launch had nothing to do with reading. It's meant to make the library a fun place, for kids to meet and interact with the staff, and generally give everyone a good feeling about the library. Then everyone is encouraged to sign up for Summer Reading Club. More than 75 kids took part.

Over the summer, a different staff member will lead the programming each week. Most do a storytime plus a craft. I'm hoping to do something a little different. I have most of the summer to plan my week, but I'll be very busy with other responsibilities - plus I'm inexperienced - so I'll need a lot of time for research and planning. 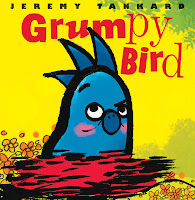 Also this past week, I co-led a drop-in family storytime with a more experienced staff member. He led us in a large number of short action songs and finger plays. I read Grumpy Bird by Jeremy Tankard and What's Your Sound, Hound the Hound? by Mo Willems, both heavy on the participation - making grumpy faces, marching in place, shouting out animal sounds. My teammate also read Oh No, George by Chris Haughton, with all the kids shouting "Ooohh nooo, George!".

This week also saw our two sold-out performances of a puppet show, a modern spin on Hansel and Gretl. Five of us (four puppeteers and a director) have been rehearsing for a while, and it was a smash success. I learned something very important: kids love puppet shows, and very few places put them on anymore. Many kids have never seen a puppet show. Apparently if you include a puppet show in library programming, it is a guaranteed hit. 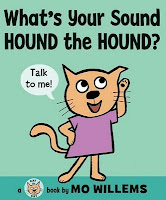 After the show, we came out with our puppets and took questions, then let the kids dig through two huge buckets of puppets and do a little pupetting themselves. They absolutely loved it.

Throughout the summer, there will also be professional performers at the library - magic acts, puppet shows, music, drumming, dance. Unlike Summer Reading Club, these are not free, which I dislike. But tickets are inexpensive - two or three dollars - and most of our customers are glad for the air-conditioned diversions. 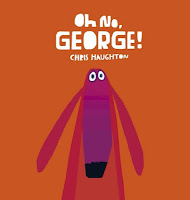 It was such a busy week! I worked really hard, but instead of feeling wrung out and drained, at the end of each day I was energized and excited. I am having so much fun!