This is the first in a series of reviews of youth (formerly called YA, or young-adult) novels, which I will be reading in no particular order and with no particular method. I love youth literature, and it's simply a pleasure to read what I want once again, with no schoolwork hanging over my head. As with all my "what i'm reading" posts, if it seems that I like everything I read, it's because I only write about books I enjoyed.

I finally read The Hunger Games by Suzanne Collins. I've been intensely curious about this book since it was released to great sensation in 2008. 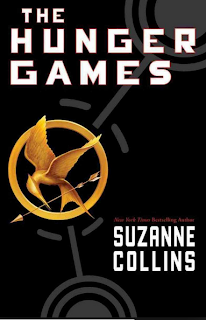 I think most readers know the basic plot of this dystopian novel. The Hunger Games is set in the future, in what was North America, now called Panem. A lavishly wealthy Capitol exercises totalitarian control over an apartheid-like system of districts. The competition of the title is an annual event in which one boy and one girl from each district are selected by lottery. The contestants all fight to the death. The Games and everything associated with them are broadcast live.

That much I knew. What I didn't know is how rich with meaning the book is, and how good. In short: I loved it.

I'm so pleased that something so wildly popular is also such a quality novel, and so political. The Hunger Games is no polemic, it contains no billboards, but it fairly begs for a Marxist analysis.

The Hunger Games is very consciously about poverty, class, and oppression. About how the ruling class divides the poor and - in this case, literally - pits them against each other. The workers in every district have more in common with each other than with their wealthy, capricious, and dictatorial rulers, but with communication and travel controlled and forbidden, they can only envy and resent each other. Workers in the coal district die of starvation and envy the workers who farm the fields, not knowing that workers in the agricultural district are forbidden to eat the crops they grow.

The Hunger Games is also about war, and a poverty draft. Although every teen's name is entered in "the reaping" - the lottery from which Hunger Games contestants are drawn - the children of poor families end up with a much greater chance of being selected. Katniss, the narrator, explains.

But here's the catch. Say you are poor and starving as we were. You can opt to add your name more times in exchange for tesserae. Each tessera is worth a meager year's supply of grain and oil for one person. You may do this for each of your family members as well. So, at the age of twelve, I had my name entered four times. Once, because I had to, and three times for tesserae for grain and oil for myself, Prim, and my mother. In fact, every year I have needed to do this. And the entries are cumulative. So now, at the age of sixteen, my name will be in the reaping twenty times. Gale, who is eighteen and has been either helping or single-handedly feeding a family of five for seven years, will have his name in forty-two times.

The chance of a young person from a wealthy family being selected, Katniss says, "is very slim compared to those of us who live in the Seam. Not impossible, but slim." Conveniently for the Gamemakers, most people in the districts never have enough to eat.

(The reaping itself is a conscious nod to Shirley Jackson's immortal story "The Lottery". The premise also recalls The Long Walk, by Stephen King, which I have not read, but read about.)

The games themselves are a futuristic reality-TV version of gladiator contests, and the book is also rife with allusions to marketing, advertising, image-making, and mass manipulation. Collins comments pointedly about our own complicity in our violent society: what drives the games more than anything is ratings. The Capitol invented the Games, but without the district viewers' lust for brutality packaged as entertainment, the Games would stop.

I'm writing about themes, but The Hunger Games is an action-packed adventure story, with a strong female hero who must tap into her own inner strength, and overcome a series of obstacles both external and internal, in order to survive. I never found the novel preachy or overly obvious. The pacing is perfect, the teenage voice completely authentic, the mix of internal monologue and action-adventure dead-on, the ending more exciting and more gripping than I anticipated. A triumph.

If you want to talk about the book, please don't worry about spoilers from the rest of the series, Catching Fire and Mockingjay. I'm also interested in reflections on the movie, as I am unlikely to see it. Folks wishing to avoid spoilers should stop reading now.

I will close this post with this image of political awakening. Katniss finds the dead body of a girl who was her ally, someone she had tried to protect.

I can't stop looking at Rue, smaller than ever, a baby animal curled up in a nest of netting. I can't bring myself to leave her like this. Past harm, but seeming utterly defenseless. To hate the boy from District 1, who also appears vulnerable in death, seems inadequate. It's the Capitol I hate, for doing this to us all.