It has finally happened. A professional male athlete in one of the big US team sports has come out as gay. Someone had to be first, and that person is Jason Collins of the NBA. Thank you, Mr. Collins, for your courage and your honesty!

From the Sports Illustrated cover story: 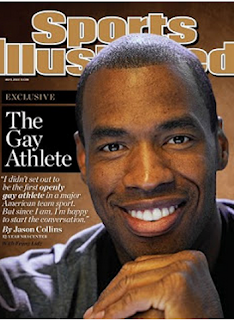 I'm a 34-year-old NBA center. I'm black. And I'm gay.
I didn't set out to be the first openly gay athlete playing in a major American team sport. But since I am, I'm happy to start the conversation. I wish I wasn't the kid in the classroom raising his hand and saying, "I'm different." If I had my way, someone else would have already done this. Nobody has, which is why I'm raising my hand.

My journey of self-discovery and self-acknowledgement began in my hometown of Los Angeles and has taken me through two state high school championships, the NCAA Final Four and the Elite Eight, and nine playoffs in 12 NBA seasons.

I realized I needed to go public when Joe Kennedy, my old roommate at Stanford and now a Massachusetts congressman, told me he had just marched in Boston's 2012 Gay Pride Parade. I'm seldom jealous of others, but hearing what Joe had done filled me with envy. I was proud of him for participating but angry that as a closeted gay man I couldn't even cheer my straight friend on as a spectator. If I'd been questioned, I would have concocted half truths. What a shame to have to lie at a celebration of pride. I want to do the right thing and not hide anymore. I want to march for tolerance, acceptance and understanding. I want to take a stand and say, "Me, too."

The recent Boston Marathon bombing reinforced the notion that I shouldn't wait for the circumstances of my coming out to be perfect. Things can change in an instant, so why not live truthfully? When I told Joe a few weeks ago that I was gay, he was grateful that I trusted him. He asked me to join him in 2013. We'll be marching on June 8.

No one wants to live in fear. I've always been scared of saying the wrong thing. I don't sleep well. I never have. But each time I tell another person, I feel stronger and sleep a little more soundly. It takes an enormous amount of energy to guard such a big secret. I've endured years of misery and gone to enormous lengths to live a lie. I was certain that my world would fall apart if anyone knew. And yet when I acknowledged my sexuality I felt whole for the first time.

Jason Collins will never know all the people he has reached, the lives he has touched, with his courage and his honesty. I look forward to the time when a professional athlete being out is completely unremarkable.
Posted by laura k at 4/29/2013 05:00:00 PM