Hundreds of fast-food workers in New York City walked off the job this week, demanding a living wage. This is their second walkout in six months, as this exciting labour movement continues to grow.

The workers, who have organized themselves as Fast Food Forward, are a model for people throughout the US who are employed but live in poverty. 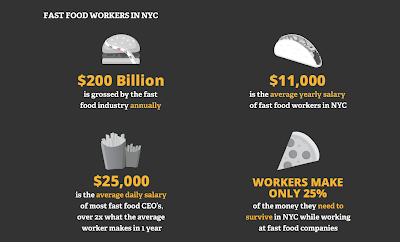 Low-wage workers in Chicago are involved in the same fight, under the banner of Worker Organizing Committee of Chicago. Both groups are calling for a $15/hour minimum wage.

The National Restaurant Association says its industry "provides more than 13 million jobs — jobs that could be jeopardized if the minimum wage goes up". So that's what they do: "provide" jobs. But workers provide the labour that keep that industry running.

And that industry has it pretty good. In non-fast-food restaurants, customers subsidize the cost of labour in the form of tips. (In the US, restaurant workers earn well below minimum wage before tips.) In the multi-billion-dollar fast-food industry, workers are expected to survive on minimum wage. In the US, that's $7.25/hour. Try living in New York or Chicago on $7.25/hour. It can't be done. Shareholders love it. As do military recruiters.

If you haven't yet signed the petitions from Fast Food Forward and WOCC, please do. Show these courageous workers you support their struggle, and tell their employers to cough up a $15/hour minimum wage.

If you live or work in New York City, why not visit a picket line? You can buy a striking worker a cup of coffee, or make a donation, or just say hi and tell them you support their efforts. I'll be in town in a couple of days and I hope to report back on the strike.

Speaking of which, I was originally flying Porter, but as 22 fuellers are on strike against that airline, I cancelled my flights. If you tell Porter you stand in solidarity with the striking workers and you will not cross a picket line, they will waive the "change fee," normally $75 per person per flight (meaning the change fee for one round-trip flight is $150). If you do this, please let Porter know here.

I rebooked on Air Canada. I paid a little more, but some bargains are not worth making. Porter's credit is good for one year, so I sure hope the fuellers win their strike soon. More information: Don't Fly Porter.
Posted by laura k at 4/07/2013 05:30:00 AM