Roddy Doyle is one of my favourite authors. I read everything he publishes for adults, but I had never read any of his children's books before. I recently read two of them, and I'm so glad I did. 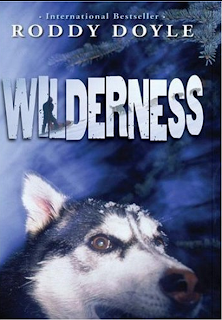 In this story, a mother and her two sons set out on winter adventure vacation in Finland. They need some time alone together, while the boys' teenage sister (their mom's stepdaughter) needs some time alone to meet her biological mother.

The girl is a sullen, angry adolescent, trapped in her own confusing emotions, which she feels unable to control. The boys are on the cusp of their own transition, one foot in the protection and comfort of childhood, the other ready to take a few steps on their own, and test their independence.

Wilderness alternates between the two stories, in two distinct voices, one older and more turbulent, the other younger and simpler, more trusting. There's no question that the man who gave us Paula Spencer, narrator and hero of two Roddy Doyle novels, can write convincingly in the voice of a teenage girl.

While the teenage sister struggles in the wilderness of forming a halting, tentative bond with the mother who abandoned her, the winter holiday becomes dangerous, and the younger brothers are forced into a very urgent and real independence. In the wilderness-survival story, Doyle gives a conscious nod to Gary Paulsen's Hatchet. There are beautiful descriptions of the wonders of dog-sledding through a novice's eyes - the intelligence of the dogs, the deep partnership between human and canine, the beautiful, fluid motions and sounds of the well-tuned pack.

The two stories come back together in the end, the young people having each crossed a threshold, both conscious, yet inarticulate, about the change.

This book is an interesting mix of adventure story and family story. In a field dominated by genre books and almost always shamefully segregated by gender, Doyle has done something gutsy: written a book not easily categorized, to be enjoyed by almost any young reader. 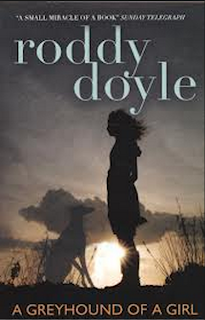 In this funny, sweet, poignant, readable book, four generations of Irish women come together, including one who left the earth long ago. Like Rebecca Stead's When You Reach Me, Doyle takes a realistic, down-to-earth story and mixes in something a little fantastical - in this case, a ghost.

Like most of Doyle's work, A Greyhound of a Girl is both funny and touching. The characters are witty and sharp, but still entirely believable. As in Wilderness, the teenage girl's voice is as real as it gets.

In fact, each woman's voice is distinctive and authentic - sharp, sarcastic Mary, her free-spirited, quirky mother Scarlett, her dying grandmother Emer, the great-grandmother Tansey, who died of influenza when Emer was a baby. This is very much a women's story, as the four generations play out a story of love, loss, and remembrance, but always with a light touch.

A Greyhound of a Girl is a lovely little book, very engaging, and despite dealing with illness and death, is breezy and easy to read. And just the right amount of sad.
Posted by laura k at 4/26/2013 10:30:00 AM