what could baseball, sexual abuse, and pitbulls possibly have in common? 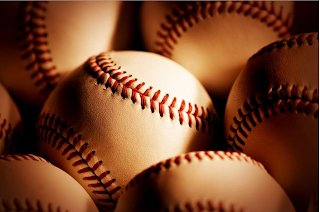 It's always a long, cold winter for a baseball-only fan, but winters for Red Sox fans have been especially long and cold lately. When was the last time we saw a meaningful game? (Don't answer that.) I lost interest 'round about July last season, unusual for me, but there's something about losing every night that doesn't inspire me to plan my life around the team's schedule.

But that's all behind us now. Spring is here, and with it, a fresh start, new hope, and who knows, maybe a half-decent, rebuilding kind of season for the Sox.

The 2013 season is also momentous for me personally: it marks my 10th year as a Sox fan. In June 2003, I crossed the great divide, and switched sides in the greatest rivalry in the history of American sports. When it comes to baseball, I'm still monogamous, but I'm on my second marriage.

I want to use this lovely Opening Day to celebrate the achievements of two baseball players. As of this season, both happen to play for the Toronto Blue Jays, a team I will politely say I dislike. But that makes no difference: it's the players' off-field activities I want to highlight.

R. A. Dickey, male sexual abuse, and the global scourge of sex trafficking

R. A. Dickey is a rare breed: a professional male athlete who has chosen to be public about being sexually abused as a child. Every survivor of sexual abuse or assault who comes out publicly helps untold numbers of people who suffer silently, and this is especially important for male survivors. From the Globe and Mail:

"Sport has provided us with the opportunity to get the white elephant out of the room," the 2012 Cy Young winner said Tuesday during his first interview with Canadian reporters since he was traded from the New York Mets to Toronto.

Dickey shoved that elephant into the public in his memoir, Wherever I Wind Up: My Quest for Truth, Authenticity and the Perfect Knuckleball, in which the 38-year-old father of four detailed his unlikely path from the minor leagues to baseball’s best knuckleballer. He also disclosed for the first time that he had been sexually abused as an 8-year-old, first by a female babysitter on several occasions, and in a separate incidence by a male teenager.

In doing so, Dickey became a powerful asset in the fight against sexual abuse suffered by boys. Experts say that since professional athletes are often viewed as the ultimate tough guys and manly role models, to have one come out as a survivor shows others that it’s okay to disclose past abuses, and seek help.

“It’s extremely powerful for an athlete to be able to speak about sexual abuse, because in our culture, being sexually abused as a man means, unfortunately, that you’re perceived as weak. You didn’t protect yourself. You weren’t strong enough. You weren’t brave enough. You didn’t take care of yourself,” said Howard Fradkin, a psychologist who works with male sexual abuse survivors, and the author of Joining Forces: Empowering Male Survivors to Thrive.

Experts say that as many as one in six boys will experience unwanted sexual touching by the time they are 18. Yet, more often than female victims of sexual abuse, they keep the abuse a secret.

Counsellors who work with male victims of sexual abuse say that’s because stigma surrounding abuse are intertwined with societal concepts about masculinity. . . .

Opening up about his experience was not easy, said Dickey. 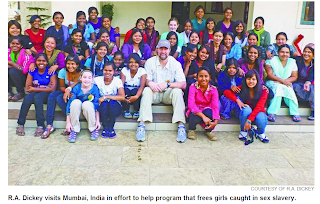 Dickey's revelation takes tremendous courage, and if he did nothing more than model this possibility for other male survivors, it would be significant.

But now Dickey is shining a spotlight on one of the most horrific forms of sexual abuse: sex trafficking. Sex trafficking is sometimes mistakenly called "forced prostitution", but it's actually something even worse: sexual slavery.

Dickey works with a group called Bombay Teen Challenge, a Mumbai organization that has been fighting sex trafficking locally for 20 years. The group has rescued more than 1,000 women and children from sexual slavery, and includes a long process of healing, nurturing, and de-indoctrination.

Dickey first raised money through a climb of Mt. Kilimanjaro, then traveled to India with his daughters, to meet the people of BTC, to see and hear first hand why their work is needed and what it does.

Before our six-day trip was over, my daughters and I had our most exhilarating experience of all, in an area called Ashagram, about two and a half hours away from Mumbai’s red-light district, a campus devoted to healing and life and rejuvenation. It’s where BTC brings the women and families whom they’ve freed from slavery (the escape process is an elaborately detailed plan that I’m not allowed to write about) and where counselors begin the arduous process of rebuilding lives, seeking to instill a sense of worth to people who have come to feel worthless, aiming to give them the equipment to live and trust and be productive members of society. It is a place where you hear children singing songs and playing games, and where you feel lightness. Like me, my daughters were deeply saddened and uncomfortable with so much of what they saw in Mumbai, but in Ashagram they flourished, making friendship bracelets and braiding hair and reveling in the simple pleasures of camaraderie. It reminded me again how the deepest, most basic kind of joy has nothing to do with the accumulation of things or the size of your paycheck; it has to do with being secure, and feeling loved. These kids who had lived their whole lives in Kamathipura were happy now because they were safe and nourished, and because they had people loving on them.

It’s really not all that complicated, is it?

I head off to Dunedin, Fla., this week, for my first spring training as a member of the Toronto Blue Jays. It has always been one of my favorite parts of being a ballplayer, the renewal and metaphorical rebirth that comes with a new season. Soon I will be throwing knuckleballs again, and though the motion may look the same, the man behind it is altogether different, having been enriched by the spirit of the good people I met in Mumbai. I will take the mound hoping and praying that, person by person, life by life, the women in captivity in Kamathipura will find their own renewal and rebirth. People at Bombay Teen Challenge tried to tell me that the contribution I’ve made has been such a blessing, but my daughters and I know the real blessings are ours.

The stories of girls and women who are held in sexual slavery in Mumbai are beyond horrific. You can read more about it here, which I post with a trigger warning: Former NY Met and current Toronto Blue Jay R.A. Dickey tells story of his journey to rescue India's youth from horrors of sex slavery.

Mark and Jamie Buehrle: justice for pitbulls and the people who love them

Pitcher Mark Buehrle (pronounced "Burly") has long been an outspoken advocate for animals, and for sensible, non-bigoted animal laws. When he pitched for the Florida Marlins, Buehrle was active in trying to get Miami-Dade county's anti-pitbull law repealed. Now that he pitches for Toronto, Buehrle and his wife Jamie turn their efforts to Ontario's breed-specific law. Jamie and the rest of their family will live hours away in western New York State. They can't move to Toronto, because their family includes Slater, who is part Staffordshire terrier, otherwise known as a pit-mix.

Buehrle was the subject of some criticism in the boosterish Toronto sports media, because, the line goes, "He should live here before he criticizes." Rubbish. There's nothing uniquely Canadian or Ontarian about the unjust Dog Owners' Liability Act. And if there were? We all criticize laws of various countries all the time. Every time we get an email decrying some human-rights abuse in Afghanistan or Saudi Arabia or wherever, aren't we doing the same? Don't Canadians criticize the US's crazy gun laws? We don't have to live in a place to recognize injustice, and to fight it.

The Buehrles say they will use every opportunity to speak out against Ontario's cruel and unjust breed-specific laws. I am so excited that Ontario pitbulls and the people who love them now have a powerful new ally. From the Toronto Star:

What’s certain is that Buehrle isn’t parting with his dog — a 2-year-old American Staffordshire terrier named Slater — and no matter where he lives, he and his wife Jamie will be adding their voices to those calling for the repeal of breed-specific language in Ontario’s controversial Dog Owner’s Liability Act, the legislation which prohibits pit bulls.

“I think it’s a discriminatory law,” Buehrle said Thursday via conference call with local media, adding that he and his wife Jamie have already made contact with advocacy groups in Ontario. “We are big spokesmen of it and we’re trying to do what we can do to try to help other people out.”

Acquired by the Jays earlier this month in a 12-player trade with the Miami Marlins, Buehrle has yet to arrive in the city and may not even end up living here. But when he gets to Toronto next season, his impact could extend far beyond what he does on the pitching mound.

The movement to repeal Ontario’s controversial prohibition of pit bull-type dogs has gained increasing momentum in recent years as it inches closer and closer to its goal.

Buehrle’s celebrity endorsement could be what the campaign needs to succeed.

Toronto NDP MPP Cheri Di Novo, who has been leading the political fight against the ban, says as soon as the legislature resumes, she will retable the bill and is confident the ban will eventually be overturned.

With the legislature indefinitely prorogued and the sluggish pace of passing new legislation even at the best of times, it’s nearly impossible that Ontario’s pit-bull ban could be repealed before Buehrle begins his Jays’ career.

But with Buehrle under contract in Toronto for the next three seasons, it figures to be a focal part of his time with the Jays.

“We’re going to do everything we can to try to get this passed,” he said.