unpaid labour used to be called slavery. now it's an internship.

A while back, I had a disturbing conversation with an unpaid editor at The Mark. She was highly skilled, an excellent editor. I told her so, and asked if she was being paid. Since The Mark does not pay its contributors, I was wondering if they also got a free pass on staff.

The young woman vigorously defended her unpaid job, explaining, "I'm learning the business as I go." To which I responded, "That used to be called an entry level job!" She seemed not to realize that people used to get hired right out of university, and trained in a variety of positions. I asked, "When the internship ends, will they hire you?" She said, no, she can renew her unpaid arrangement, or leave. It's safe to assume that if she chose to leave, another unpaid intern would take her place.

The New York Times confirms that increasing numbers of desperate university graduates are accepting unpaid work, in the hopes of gaining experience. The Daily Mail notes the same is happening in the UK, and the Toronto Star's Carol Goar documented the practice in Canada.

Unpaid internships have long been the norm in the nonprofit world, where dollars are stretched till they scream. In the past, however, interns were usually students. They worked on special projects, and there was an understanding that they were first in line for real jobs. Now interns have university or Master's degrees, and they work in day-to-day operations.

HuffingtonPost.com was bought by AOL, but still doesn't pay its writers. Media giant Rogers hires - or, more accurately, uses - unpaid interns in its newsrooms and for magazine production. The broadcasters who read local news on Channel 10 are "paid" with a pizza lunch. Bell Canada, the largest corporation in the country, uses unpaid interns in nearly every department. We can't seriously be expected to believe Rogers and Bell can't afford to pay entry-level employees. Some perspective:

According to Statistics Canada, unemployment in Ontario for those younger than 24 is 16.5 per cent. That’s more than double the rate of 6.3 per cent for those above 24.

“You won’t find the word ‘intern’ in our employment laws at all. It’s an industry term,” said David Doorey, professor of employment law at York University. “There seems to be a widely held belief that an employer avoids our basic employment law rules simply by labelling someone an intern. That’s wrong.”

In many sectors of the economy, internships seem to have replaced entry-level positions, forcing young people to work without pay for years till they gain enough experience to get hired for mid-level jobs, says Toronto lawyer and internship critic Andrew Langille.

Langille estimates tens of thousands of people are misclassified as interns by their employers. “As a result of this mischaracterization these young people forgo wages, can’t collect EI, and aren’t credited with contributions to CPP,” said Langille, who monitors internship job postings on his blog and often intervenes in an attempt to see that minimum wage is paid.

At the same time, more education than ever is required: not only a four-year university degree, but one and sometimes two Master's degrees, so young people enter the job market increasingly burdened by debt.

Unpaid internships exclude young people who simply cannot afford them, people who must pay their own way in order to eat and put a roof over their heads. During my time in grad school, a steady stream of volunteer positions was always posting. Only students from privileged backgrounds could even consider applying for them.

Companies should have an obligation to hire and train young people, but the brutal equation of capitalism shields them from any obligation except profit for their shareholders. The government, by not holding down education fees, and the companies that exploit young graduates, are helping to financially cripple an entire generation. This in turn will take a toll on our entire society.

From the news desk to the checkout line

Unpaid labour takes other forms, too. The restaurant industry has their labour costs subsidized by their customers, and we've come to accept this bizarre situation as perfectly normal. But think about it: why should customers be responsible for paying servers? Why should servers' pay depend on customers' whims - and on the relative ignorance of the customer? Sadly, many people think tipping is optional, a way to reward outstanding service, and acceptable to withhold if you don't like the food, or perhaps can't afford the meal any other way. But servers live on tips. 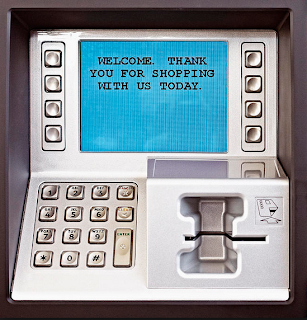 Supermarkets and big-box stores also get free labour, every time customers use the self-checkout aisle. After we spend money at a store, is it such a luxury to have someone ring up our purchases and put them in bags? Apparently so. My local Loblaws keeps two people working on checkout, with eight cashier bays empty - thus creating long lines, and ensuring frustrated customers will use self-checkout. Getting out of Ikea has become a nightmare, with one checkout staffed, and everyone else struggling to find the bar codes on their own items.

Contrary to what companies would like you to believe, the great savings in labour costs is not passed along to the consumer. It's pocketed as profit.

Other costs are offloaded to the customer and sold as convenience. Printing your own boarding pass may indeed be convenient, but think of how much money it saves the airline over time. Paperless billing, while good for the environment, is another huge cost saver, passed along to the consumer.

Finally, we shouldn't talk about unpaid labour without acknowledging the largest sector of unpaid work on the planet: the work traditionally done by women at home. The numbers on this are startling.

Late stage capitalism, squeezing us all

The trend of unpaid internships is best seen in context of late-stage capitalism, as companies, desperate to show growth, try anything to wring out a drop of profit.

Forcing workers to work off the clock.

Shrinking product size. A bag of coffee, traditionally one pound, is now 12 ounces. A carton of juice, formerly two litres, is now 1.75 litres for the same price. I bought a familiar skin care product. The packaging looked the same, but inside, there was a false bottom. The actual product was 25% smaller. Yes, the millilitres or ounces were labeled correctly, but if you're familiar with the size and shape of a product, are you checking the ounces each time you buy it?

Meanwhile, services cost more, and more services are needed. Housing costs, utilities, and food are subject to the market, even though all industries reap the benefits of government subsidies. For many people, this turns necessities into luxuries.

Last year, I wrote: what are people supposed to do? or, why we need socialism.