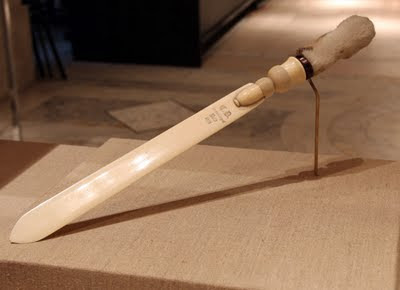 Charles Dickens' letter opener
The handle is the preserved paw of one of his beloved cats.
I can think of few things sadder, scarier, and stupider than public libraries being destroyed by government "austerity" measures. This desperate budget-slashing would be unnecessary in a more rational economic system - and would be unthinkable in a more just one.

This moving piece in The Guardian describes what is being lost in the UK (as bank CEOs get multi-million dollar payouts).

As local authority budgets are reduced by the government's cuts, up to 500 libraries around the country will have to close. Librarians – traditionally seen as a mild, herbivorous breed – are up in arms. Partly because public libraries are often seen as a soft target; partly because they say local authorities consistently undervalue the breadth of what they do; and partly because the cutting will be done during a recession, which is exactly when everyone starts going to the library again.

But the cuts also underscore a deeper confusion about what libraries are: what they do, who they serve, and – in an age where the notion of books itself seems mortally flawed – why we still need them. What's the point of buildings filled with print? Isn't all our wisdom electronic now? Shouldn't libraries die at their appointed time, like workhouses and temperance halls?. . . .

The great untold truth of libraries is that people need them not because they're about study and solitude, but because they're about connection. Some sense of their emotional value is given by the writer Mavis Cheek, who ran workshops within both Holloway and Erlestoke prisons. At Erlestoke she had groups of eight men who so enjoyed the freedom and contact of the writing groups they ended up breaking into the prison library when they found it shut one day. Which authors did they like best? "Graham Greene," says Cheek. "All that adventure and penance. His stuff moves fast, it's spare and it's direct."

Greene might seem a surprising choice, but then what people choose to read in extremis often is. In London during the Second World War, some authorities established small collections of books in air-raid shelters. The unused Tube station at Bethnal Green had a library of 4,000 volumes and a nightly clientele of 6,000 people. And what those wartime readers chose were not practical how-to manuals on sewing or home repairs, but philosophy. Plato and his Republic experienced a sudden surge in popularity, as did Schopenhauer, Bertrand Russell, Bunyan and Burton's Anatomy of Melancholy.

Ian Stringer worked in Barnsley just after the 1980s miners' strike. "Library issues doubled during the strike, they were the highest they've ever been. A lot of ex-miners wanted books on law because they wanted to challenge the legality of what the government was doing. Or they needed practical self-help stuff like books on growing your own, or just pure escapism." The same thing is happening now.

From Salon, a similar defense of libraries in the digital age, this one grounded in New York City.

Public libraries across the nation and the globe now face drastic funding cuts from politicians and administrators who often claim that they're obsolete. For months, Britain has been rumbling with protests against plans to close as many as 400 local branches. Earlier this year, Gov. Jerry Brown announced that he was cutting all state funding to California's libraries, leaving cities to pick up the slack. Defenders of such cutbacks typically ask why, in the age of Google and e-reader devices, anybody needs libraries.

Let's set aside the obvious rejoinder that many citizens can't afford e-readers and, furthermore, can only access Google via a library computer. The anniversary of the NYPL's main building is an occasion to talk about why the library needs to be a place as well as an ethereal mass of data residing somewhere in "the cloud." Not everything we need or want to know about the world can be transmitted via a screen, and not every experience can be digitized.

Also, not everything a library collects is a scannable book or document. The NYPL's anniversary exhibit includes such treasures of print culture as a Gutenberg Bible, a copy of the Declaration of Independence written in Thomas Jefferson's hand, and a first quarto edition of "King Lear." It also features the personal effects of writers, such as Jack Kerouac's rolling papers, harmonica and Valium box (with notes scribbled on it): [Click through for photos of this and other treasures, like the one pictured above.]

I've always found the material presence of such objects quietly thrilling. [Ed note: Me, too!!]

Today, those oak tables have power outlets and more than half the patrons are tapping on laptops. Yes, they have laptops and yet they've come to the library. Librarians (who are of course the most invaluable feature of any library) tend to bristle at the stereotype of their profession as a glorified shush patrol, and typically respond by pointing out the many, many community services libraries provide, from storytelling for children to multimedia resource centers for job seekers to gathering places for seniors. But let's not totally discount the shushing, because a good library can also give its patrons something that's getting harder and harder to find: quiet.

In Los Angeles, librarians are being interrogated, not about the Patriot Act, but to discover if they are eligible for employment. California school districts are eliminating school libraries and city attorneys are trying to determine if school librarians should lose their jobs completely or be moved to teaching positions.

I've heard horror stories about the state of school libraries in Canada, so reports about Ontario's desperate school libraries did not surprise me. Canada is supposedly preparing citizens for a "knowledge society". Is shredding or eliminating school libraries a good way to start? The Ontario Coalition for School Libraries is fighting back.

So far, when it comes to public libraries, Canada is holding fast. How long that will last?

And on a lighter note, this cool librarian t-shirt. Order yours here.