coyotes and other creatures: education vs ignorance, coexistence vs extermination 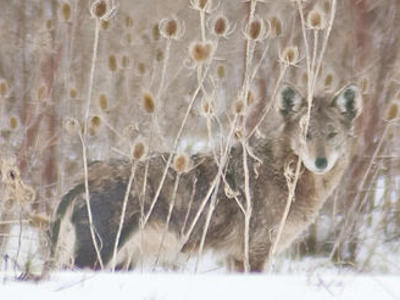 Photo: Lianne Howie, Lucky Mutt Pet Photography
In April, I blogged about a proposal in Ontario to legalize coyote-killing contests. This excellent article from a small, local newspaper explains why such plans simply do not work, and describes the best approach for dealing with urban and suburban coyote populations. As with so many things, a "zero tolerance" approach will only make things worse. Public education and coexistence is the way forward.

Personally, I don't buy the evolutionary psychology theory about people's misplaced fear of coyotes, as humans have misplaced fears about so many things, and evolutionary theories strike me as cherry-picking at best. (Evolutionary psychology is often used as an excuse for sexism.) But I do know that fear and ignorance drive so many terrible ideas, whether its a ban on dog breeds or headscarves, or recent celebrations of a murder.

"Nothing in life is to be feared. It is only to be understood. Now is the time to understand more, so we may fear less." - Marie Curie

A North Oakville woman walking the paths of 14 Mile Creek is suddenly face to face with a coyote, its head slightly bowed, in all appearances waiting for an opportunity to attack. In the blink of an eye, the predator is gone.

From the window of a Glen Abbey home, a resident sees a flash of movement in the backyard. But the movement is much too large and swift to belong the family’s pet Chihuahua. The resident opens the back door to investigate and sees the tiny family pet in the grasp of a coyote. The sound of the door opening frightens the coyote who drops the dog and escapes over the fence and into the ravine.

The terrifying stories of coyotes in North Oakville are plentiful. These carnivores appear as suddenly as they disappear. They hunt in backyards, stalk the pathways and leave residents with an ominous feeling.

We are afraid. But should we be?

"When there's something with the potential to hurt us, we're afraid," offered Michael Runtz, a professor at Carleton University and renowned Ontario wildlife expert. "It's part of our psyche. Consider the safety of driving on the QEW; it is far more dangerous, yet we shrug that off because we accept that we're safe in a car. But if you mention there's a pack of coyotes around the corner, we're reminded of that fear."

Runtz explained that while cars weren't part of our history thousands of years ago, large carnivores, like coyotes, certainly were.

"A child that requires attack or injury to learn that an animal is dangerous is unlikely to survive for long," wrote David M. Buss in Handbook of Evolutionary Psychology. "For this reason, we might expect natural selection to have created a specialized learning system."

In his book, Buss points to studies indicating that nonhuman primates (apes, gorillas, etc.) are able to "culturally transmit" learned knowledge such as fear of predators and "pre-specified cues to dangerousness" (sharp teeth, large size, etc.). He theorizes that this is likely common in human evolution as well.

"Fear often dictates the public's response to the presence of carnivores in developed areas," he wrote.

North Oakville is home to many natural predators – red-tailed hawks, red foxes and domestic cats – all who compete with coyotes for many of the same food groups. Though according to Gehrt, "coyotes differ from most other urban wildlife in that they can be deemed worthy of removal simply by being seen, rather than after they have caused some damage or inconvenience for human residents." . . .

Read this excellent story here. Many thanks to writer Michael Howie and to Dharma Seeker for sending this to me.
Posted by laura k at 5/22/2011 07:00:00 AM

Labels: animals (other than dogs), environment