trying to save wolves, close the tar sands, and not lose hope

Of all the email alerts I get about various important causes, I find the updates from NRDC's Save Biogems the most alarming and depressing. Taken together, the subject lines read like chapters in a book entitled "How Humans Are Killing the Planet". Or, more accurately, "How Capitalism is Killing the Planet, since, globally, most humans are the victims, not the culprits, of these crimes.

Sitting in my inbox from NRDC from the last few weeks: mountaintop removal, the continuing war on wolves, tar sands, polar bears, oil and gas exploitation of the Rocky Mountains, energy exploitation in Patagonia. Of course the emails all contain action alerts, easy clicks to contact representatives, speak out and donate. But with energy and financial interests controlling the governments of the world's major nations, it's difficult to feel hopeful. 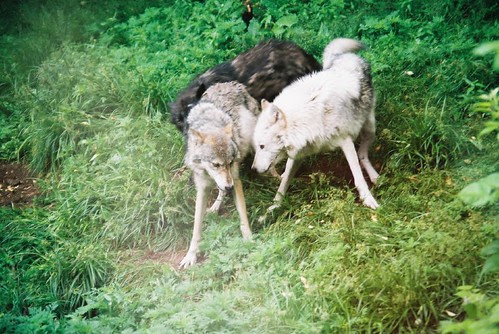 Haliburton Forest Wolf Centre, Ontario, 2009
I haven't posted any updates about the terrible situation regarding wolves in a while. After an excellent ruling in August which restored federal protection for the gray wolf, wolves in the US are once again threatened by "delisting" - removal from the endangered species list. This time it's something called the "Northern Rocky Mountain Gray Wolf Recovery and Sustainability Act of 2010," known as the Baucus-Tester bill, sponsored senators from Idaho and Montana. If passed, the bill would sidestep that positive ruling, strip wolves of federal protection and throw wolf "management" back to the states. That will almost certainly translate into mass wolf kills in Idaho, Montana and Wyoming.

The Baucus-Tester bill is being heavily lobbied; many senators who appear to care about the environment are expected to vote for it. If you're in the US or have friends who are, you can help by contacting your senators or circulating this link: go here. If you can't participate in the campaign, but you love wolves as I do - or if you simply care about wildlife - click through for info and some great photos.

Readers on both sides of the Canada-US border can raise their voices against the tar sands expansion that threatens millions of migratory birds.

All four major flyways in North America -- the aerial migration routes traveled by billions of birds each year -- converge in one spot in Canada's boreal forest, the Peace-Athabasca Delta in northeastern Alberta. More than 1 million birds, including tundra swans, snow geese and countless ducks, stop to rest and gather strength in these undisturbed wetlands each autumn. For many waterfowl, this area is their only nesting ground.

U.S. demand for tar sands oil is causing Canada to ramp up tar sands oil extraction in the boreal forest just south of the Peace-Athabasca Delta, including sites upstream on the Athabasca River. Water extracted for tar sands mining could reduce flow into the delta, killing fish -- a food source for birds -- and disturbing habitat. Wastewater discharge could also contaminate the river, creating a toxic food web and leading to reproductive problems in wildlife. In 2008, 1,600 ducks died after landing in a tar sands waste pond.

Tar sands oil development also contributes to global warming, which is reducing ecologically important flooding in the delta. A number of developments are threatening the Peace-Athabasca Delta, including the Bennett Dam on the Peace River. Tar sands oil extraction exemplifies how our addiction to oil is causing loss of critical bird habitat in the delta and throughout Alberta’s boreal forests and wetlands.

The U.S. State Department is on the brink of approving a new trans-boundary pipeline that would bring tar sands oil from Canada to the U.S. Gulf Coast, leading to additional mining and drilling for tar sands oil in the boreal forest. NRDC and our BioGems Defenders are fighting to stop the expansion of tar sands oil extraction and to protect bird habitat in the boreal forest. We are calling on the State Department to say No to new tar sands pipelines in the United States and encouraging a switch to cleaner forms of energy production that would reduce global warming and protect North America's last great forests.

In the US, click here to contact representatives about the tar sands pipeline from Canada to the Gulf Coast. 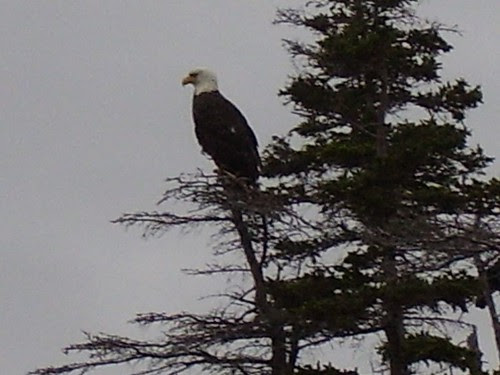 Gros Morne National Park, Newfoundland, 2008
In Canada, one of the best groups fighting tar sands expansion is the Indigenous Environmental Network. I've heard Clayton Thomas-Muller, who chairs the IEN's Canadian Indigenous Tar Sands Campaign, speak a few times. The group makes clear the connections among human rights, the rights of indigenous peoples, labour conditions and the health of the planet. More information on the campaign here.

The Council of Canadians is another group leading the fight against tar sands expansion; their tar sands section is here.

It's hard for me to feel hopeful about these issues. The interests we're up against are so huge and so powerful. I need to remember a story I heard Thomas-Muller tell earlier this year. I'm sure some of you have heard this before, but it was new to me.*

The blue whale is the largest animal on earth. It's so large that it can take 10 minutes to turn 180 degrees. A school of sardines - a great mass of tiny creatures - can be nearly as big as a blue whale. But an entire school of sardines can completely change directions in a matter of seconds. First a few sardines swim in the opposite directions, then a few more... and if only 15% of the sardines turn around and swim the other way, the entire school will follow.

You don't have to convince everyone. You don't have to turn around a whale by yourself. No one should have to carry that burden. But if each of us reaches a few others, we can be that 15%, enough to change the direction of the world.

Long ago, I used to love these words made popular by Martin Luther King, Jr., originally written by Theodore Parker: "The arc of the moral universe is long, but it bends towards justice." I still love the sound of that sentence, but now I recognize it as magical thinking. I don't believe in a moral universe. And I don't believe that justice is in any way inevitable or preordained.

But I struggle to have hope, and to believe that change is possible. I remind myself that whether we are pessimists or optimists - whether we are filled with hope or filled with despair, or see-sawing between the two - none of us knows the future. The future is still unwritten. And I know one thing. To paraphrase Gandhi on the sidebar of this blog: if we take no action, there will be no change.