131 veterans and other peace protesters arrested at white house 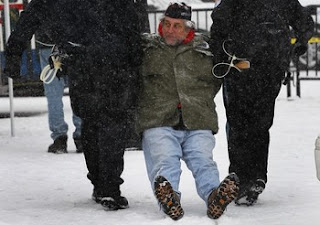 A Veteran Being Arrested at the White House, December 16, 2010
Yesterday, 131 people, about 100 of whom were veterans, were arrested in front of the White House. Veterans for Peace staged the civil disobedience, protesting the war in Afghanistan on a day President Obama invoked 9/11 to justify the continued killing there. Daniel Ellsberg, Ann Wright, Ray McGovern and several members of Code Pink were among those arrested; there were solidarity rallies in New York and other cities.

I'm very heartened by this action. I hope it's the beginning of a trend. For more about these and other committed peace actions, see Stop These Wars. Read their Call To Action here. Read, join, support.
Posted by laura k at 12/17/2010 04:00:00 PM