galloway in toronto: decision was "the soundest judicial caning of a government minister" we've ever seen 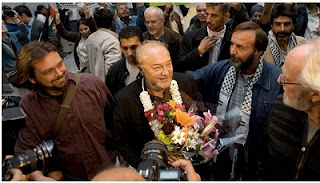 I wish I could tell you everything George Galloway said in Toronto yesterday, because I'm sure it was an inspiring, energizing, truth-telling and sobering talk. I wasn't able to stay for most of it, because Sunday is a work day for me. But by rearranging all my break time for the weekend, I was able to run up to Trinity St. Paul's United Church, spend an hour with my resister-campaign family, be part of the triumphant scene to cheer Galloway on, hear some important words, and run back to work.

You'll be able to see Galloway's talk on Rabble TV, but I'll share a few cool things I did catch.

The church was packed to the rafters. War resisters and Galloway's legal team held places of honour on the stage. An organizer began a chant of "Kenney out! Galloway in!" but when Galloway - and his volunteer bodyguards - entered, we all jumped up and broke into wild cheers and applause.

James Clark, a lead organizer with Toronto Coalition to Stop the War and Defend Free Speech, and one of the applicants in the lawsuit, chaired the event. James was interrupted over and over by jubilant applause and cheering, as he outlined how the Harper Government and Jason Kenney tried to stop George Galloway's appearance in Canada - but how they couldn't stop us, how thousands of us watched Galloway address us by video - how Kenney attacked Galloway, smeared him, slandered him - then gloated and bragged about keeping Galloway out of Canada.

But, James said, our side won "a massive victory in the Federal Court of Canada," and now we must use that victory as a new beginning, to turn the tide against the Tories, to push back against their attacks on free speech, democracy and all our struggles: "Today is a victory, but it is only a first step. Jason Kenney must pay for lying to the public" and for making Canada look like a banana republic!

Next the two lawyers who defended the Galloway case in Federal Court spoke. They made it very clear just how big a victory this was for our side. Jason Kenney lost throughout: George Galloway was cleared of any wrongdoing, the court found that Kenney acted in bad faith, that the government declared Galloway inadmissible to Canada because they disagree with his political views, and that humanitarian aid is not equivalent to terrorism.

Immigration and refugee lawyer Barbara Jackman spoke briefly and eloquently on a few points that I want to share.

One, the Federal Court is the most conservative judicial body in Canada. For that court to rule against the government shows just how far this government went.

Two, we were able to win this case in large part because of the overwhelming display of community support. "Decisions are not made in a vacuum," Jackman said. The government's banning of Galloway sparked outrage and condemnation - and that made a huge difference.

Three - and most importantly - Jackman reminded us of the larger context behind this case. The "membership clause" - section 34 of IRPA, the anti-terrorism clause - is used to criminalize dissent. Anyone who is a member of a terrorist organization is inadmissible to Canada, but the government defines "membership" with a broad, sweeping brush, and through its own ideological lens. Jackman said, "Huge numbers of refugees have been deported back to torture" because they support popular movements in their countries of origins, and these movements have been labelled terrorist organizations by Canada.

The membership clause was brought in under a previous Liberal government, and used in a sweeping and abusive way by this Conservative government. Jackman and others have been trying - so far unsuccessfully - to get the clause struck down. But when the government used this clause against George Galloway, they went too far. This decision was the first ever to narrow section 34.

Jackman reminded us that the people this clause usually affects are from immigrant communities that have been racialized and marginalized. They can't vote. They need good people of conscience who can vote to speak for them.

Next, Jamine Aponte, the partner of war resister Phil McDowell, spoke briefly about the C-440 vote, appealing to the crowd to support war resisters, to contact Michael Ignatieff and other Liberal MPs, and to help her and all the war resisters stay in Canada. Galloway greeted and thanked some of the war resisters.

Then, after a few more brief remarks by organizers, Galloway addressed the cheering crowd. He thanked all the key people in this fight and all the good people of Canada. He thanked Justice Richard Mosley for issuing "the soundest judicial caning of a government minister" ever to be handed down from the bench.

And now, when we get to the really good stuff, I have to leave you in the good hands of Rabble TV.

When I wrote about the Galloway court hearing (parts one, two and three), I mentioned that I have copies of the documents that were submitted by our side, including the appendix outlining the e-mail exchange begun by CIC flak Alykhan Velshi - evidence that the government first concealed, then accidentally released to our side, then tried to have excluded from the proceedings. At that time, I said I would upload those documents for anyone who wanted to read them, then I never followed up. Should I post them? Anyone interested?
Posted by laura k at 10/04/2010 06:00:00 AM