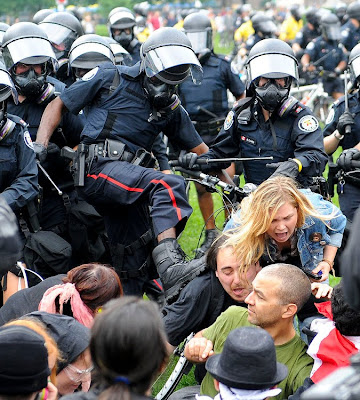 In August 2007, we learned that Quebec police officers were undercover at a protest in Montebello, carrying large rocks, trying to incite a peaceful crowd to turn violent. Naturally, the RCMP and provincial police categorically denied the story, but were forced to admit the truth when video footage was released. The masked men were wearing the exact same type of boots as the uniformed police officers and when they were confronted by actual protesters, they quickly ran towards (and were allowed behind) the line of riot police.

Today, there are numerous reports -- from both national media and private citizens -- of heavily-armed police at the G20 protests yesterday simply standing around or actually AWOL when some of the most extreme violence was occurring. It makes one highly suspicious that the vandalism may have been allowed to occur to justify the spending of at least $1,300,000,000 of taxpayer money on "security".

Of course, the media's obsession with photos and video footage of violence has conveniently pushed aside the existence and concerns of the tens of thousands of peaceful protesters. 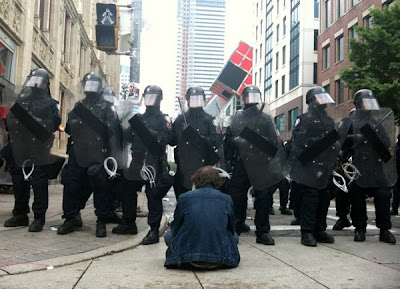 The Toronto Star reported that "about 70 black-clad protesters ran amok through mostly deserted streets ... At police headquarters, about 50 officers in full riot gear stood guard, but they didn't move against the protesters even after they smashed the windows of the police museum."

Marcus Gee, columnist for the Globe & Mail, reported that the police kept their distance as a few dozen people "roamed through the business district, then up Yonge and along College, smashing all the way. ... There was not a cop in sight as the crowd went on its rampage on Yonge."

Gee lamented that the peaceful protest was overshadowed by "a small group of perhaps 100 or 200 hard-core militants ... with destruction on their minds", yet he devoted most of his column to their antics. It's irresistible, I guess. The Star's photo section is dominated by action shots of rioters.

David Langille, posting at rabble.ca, said he and a group of friends

heard glass breaking on Yonge Street, and saw a mob of about 150 coming around the corner, hurling chairs into windows. Someone threw a bottle through a window showering me in broken glass. What was most striking was that there were not any police in sight.

Evidently this group had started rioting on Queen Street over half an hour earlier -- where the police drove one of their cars into the middle of the group then abandon[ed] it. It was soon set on fire -- making a great photo op.

The group proceeded up Yonge Street smashing windows [for] at least eight blocks, without being stopped by police. ...

As an academic and an activist, I have participated in numerous demonstrations in Canada, the United States, Europe and South America, and I have never seen such a dereliction of duty. ... [W]hen the rioters came smashing their way up the main street of Toronto, the police disappeared for half an hour.

The police spokesperson told Metro Morning today that they waited until later when it was safer to make arrests but that cannot be true. I was there and ... the cops could have arrested the Black Bloc right at the beginning of the action but they abandoned their police cars and allowed them to burn, not even calling the fire department until the media had lots of time to photograph them. ...

People were shocked last night by a city out of control but ... the bigger question here is why the police let it happen and make no mistake the police did let it happen.

On the rabble discussion boards, "absentia" posted at 7:24 this morning:

I watched the CBC yesterday, and what struck me about the "vandals" scene is how staged it looked.

Two police cars, empty and with open windows, parked out front, apart from everything else, serving no obvious purpose. Masked person saunters up to one, in plain sight of camera, nobody trying to stop him, no sense of urgency or subterfuge... Another one lets camera have a good gawk at his pick-hammer, then calmly and delibaretely smashes plate glass... Almost as if they didn't expect to be stopped.

Mass of robocops in full regalia over here; mass of bicycle cops in shorts and yellow macs, no protective gear, over there, just standing around. Huh?

About those curious blazing police cars. I was at the site, close to those cars. We were confronted by scores of menacing cops, who were keeping crowds back. Then, an odd thing happened. The cops retreated and went elsewhere, leaving both cars abandoned. I thought this was MOST peculiar. When was the last time you saw cops abandoning their own police cars? Within about 30 minutes ... both cars were set aflame -- how I don't know. MOST peculiarly again, not a single cop was there to step in, although there were hundreds of them just around the corner on Spadina Avenue. The whole thing reeked of a set-up.

CP-24's non-stop, hysterical 'coverage' has been predictably one-sided. The thousands of peaceful demonstrators were all but forgotten. Now, it's all about 'anarchists' and 'thugs'. 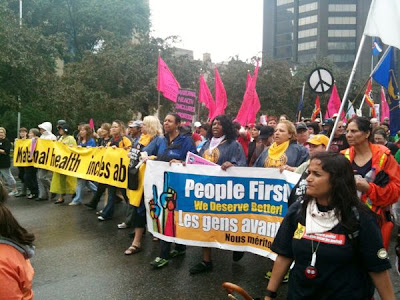 Steve Paikin, the host of TVO's current affairs program "The Agenda with Steve Paikin", was in the midst of the protest and his Twitter feed includes several accounts of police brutality (I have combined consecutive tweets into separate paragraphs):

they repeated they would arrest me if i didn't leave. as i was escorted away from the demonstration, i saw two officers hold a journalist. the journalist identified himself as working for "the guardian." he talked too much and pissed the police off. two officers held him. a third punched him in the stomach. totally unnecessary. the man collapsed. then the third officer drove his elbow into the man's back. [The journalist was identified as Jesse Rosenfeld] ...

the demonstration on the esplanade was peaceful. it was like an old sit in. no one was aggressive. and yet riot squad officers moved in. police on one side screamed at the crowd to leave one way. then police on the other side said leave the other way. there was no way out. so the police just started arresting people. i stress, this was a peaceful, middle class, diverse crowd. no anarchists. literally more than 100 officers with guns pointing at the crowd. rubber bullets and smoke bombs ready to be fired. rubber bullets fired ...

the police should be smart & do nothing. this is not a violent crowd. they keep insisting it's a peaceful protest. cops tightening their perimeter. why? they are forcing something they dont need to force. who is ordering these police to tighten the noose? it's unnecessary. evwryone's sitting. now tthety'ret motvintt into the crowd. cops moving closer why? arresin people

Police attacked non-violent protesters, pepper spraying and beating them with batons even as they attempted to comply with police orders.

In a story reminiscent of house raids in Afghanistan and Iraq, Dr. John Booth, his wife, and their six-month-old son woke up at 4:00 a.m. on Saturday to find several police officers in their bedroom with guns drawn. The police claimed to have warrants to search the house and arrest Mr. Booth, but they never actually produced the warrants.

Earlier, on Thursday afternoon, Dave Vasey was walking with a friend at York Street and Bremner Boulevard when police demanded he show some identification. ("Papers, please!") Vasey said he was not comfortable with the question and was arrested and kept in a wire cage for five hours. Vasey said the police "told me there was this bylaw. I didn't know what they were talking about." That's because the law was passed in secret.

The protests are continuing today. A Toronto police officer, at 10:22 a.m., near the Atrium on Bay Street:

It's gonna get crazy again this afternoon.

[L note: this post arose from my post of yesterday: "save a little outrage for the real criminals", and the comments found there. Thanks to reader Scott M for alerting me to Steve Paikin.]
Posted by laura k at 6/27/2010 10:00:00 AM