There are two current trends that I seriously dislike, and wish we would all organize to change: retail self-checkout and the use of gift cards as thank-yous and gifts. Neither practice will go away any time soon; indeed, I'm sure they only will become more ubiquitous. But both trends are in our power to stop, and I wish we would stop them.

A cashier is not a luxury

Buried in an earlier post about unpaid internships, I mentioned a few other forms of unpaid labour that have become commonplace. These days, most retail chain stores enjoy the benefits of an unpaid, uncomplaining labour supply that never demands overtime pay and never takes a holiday. They're called customers. Us. 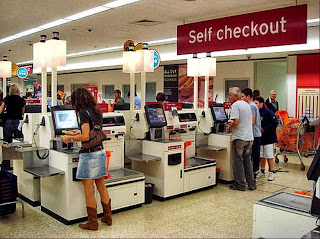 Almost every major chain store now has a self-checkout lane, where customers scan, bag, and pay for their own purchases, with varying degrees of frustration and success. Typically, one worker - that is, one paid worker - oversees and troubleshoots four or six self-checkout bays.

I believe that, all things being equal, very few customers would choose self-checkout. That is, if cashiers were available with a minimum of waiting time, most people would prefer a cashier. Thus, stores make sure that cashiers are not available. On a typical day at our local Loblaw supermarket, two checkout lanes are staffed, and about eight lanes are closed. This ensures long lines, which in turn ensures that customers will choose self-checkout, thus letting Loblaw get away with hiring so few staff.

Why are we doing Loblaw's work for them? And Canadian Tire's, and Ikea's, and ... fill in the name of your store here.*

Who sees the savings?

Corporate public relations would have us believe that self-checkout allows companies to "keep prices low". I ask you, does that appear to be happening? Have prices dropped? We all know the answer, as the price of everything continues to rise.

Self-checkout has allowed one thing: corporations can continue to decrease labour costs. Low-wage workers lose their jobs or see their hours (and their income) dry up. And fewer jobs exist in our communities. While it's true that some company somewhere must make the self-checkout machines, that manufacturing is typically (a) done by robots, and (b) not in the community, or even in the country.

But this is actually within our control. If we all refused to use self-checkout, and the lines grew to intolerable levels, and customers complained, stores would be forced to hire more workers. The change would not be instant, but it would happen eventually.

This August 2012 story about self-checkout says that Ikea has scrapped self-checkout in the US because of long lines and customer complaints. This has not happened in Canada, and little wonder, since Canadians are notorious for complaining only to each other.

Whether we are shopping for groceries or hardware, it should not be a privilege or a perk to have a store employee ring up our purchases, put them in bags, and take our money.

If everyone reading this right now would pledge never to use self-checkout - and ask five people to do the same - and those five people would ask five people... But alas, this is not a hilarious internet meme, so we won't expect it to go viral.

In praise of cash

In recent years, gift cards have become a nearly ubiquitous currency for the expression of gratitude or appreciation. Supervisors and managers give gift cards to employees as perks; friends give them to friends to say thanks for a favour. People also routinely use them for gifts when they're unable - or unwilling - to shop for a personal gift. 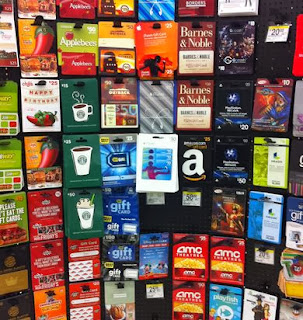 Gift cards are easy to buy, the giver doesn't need special knowledge of the recipient's likes and dislikes, and (now) they don't expire. But another reason people reach for the gift card is that we are embarrassed by cash.

Many times, I have received a gift card as a little thank-you. It was totally unnecessary, a simple verbal thank-you would have sufficed, but the giver wanted to do a bit more. This giver never would have given me cash. They would have considered that crude and unseemly. Yet they spent the same amount of money, plus they limited my enjoyment to one store.

They make great gifts... for corporations

Six or seven years ago, it came to light that many popular gift cards were hardly gifts at all. The contained expiry dates - often in tiny print or on disposable outer material (that is, not on the card itself) - and the companies charged fees both for purchase and redemption. (The phrase "They get you coming and going" springs to mind.)

In response to public complaints, most Canadian provinces passed consumer-protection laws regulating gift-card sales. Similar legislation appears to have been passed in the US in 2010.

Despite these necessary controls, the use of gift cards as currency puts far too much power in the hands of the corporation. This excellent article by David Olive in the Toronto Star explains how gift card purchasers extend billions of dollars in interest-free loans to some of the world's most profitable corporations.** In Canada, those loans total $50 billion; in the US, they reach more than 12 times that amount.

Give the gift of choice

When you buy someone a present, and you don't want to choose a gift, why limit their gift to one store? If you give cash, they can (obviously) buy whatever they want.

One argument I've heard against giving cash is that it might be used for necessities like food or rent. What of it? If the recipient uses a gift to help pay rent, that help is likely most welcome. At the very least, the cash gift frees up income that would have gone to rent. If a person does need help with their rent, their landlord is not accepting Tim Hortons cards.

There are times when cash is out of the question. When a close friend with a healthy income does me a favour, I don't offer to pay her. I can try to return the favour at some point, or take her to dinner, or write a note to express my appreciation. That's what friends do.

But in many other circumstances, one crisp $10 bill plus one $5 bill in an envelope would seem cheap and a bit weird. But a $15 gift card seems generous and acceptable.

Let's resist this ridiculous devaluing of real currency in favour of company scrip. Let's give and accept cash without embarrassment. Who's with me?


------
* I'm not including self-checkout at the library. Library staff are public employees, self-checkout involves RFID tagging, and there are other considerations. I discussed this a bit here.