what i'm reading: man's search for meaning by viktor frankl 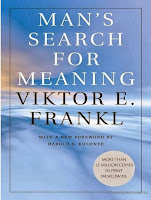 I've just finished reading Man's Search for Meaning, a classic written by Dr. Viktor E. Frankl in 1959, republished with various forewords and epilogues in 1984, 1992, and 2006. It's a book I had long wanted to read but had forgotten about, until I saw it on the Mississauga Library System's "Raves and Faves" display, adult nonfiction division.

Frankl, who died in 1997, was a neurologist, a psychiatrist, and a therapist. He was also a Holocaust survivor whose entire family perished in the Nazi death camps. The original German title of Man's Search for Meaning is translated into English as Nevertheless, Say "Yes" to Life: A Psychologist Experiences the Concentration Camp.

Man's Search for Meaning is divided into two parts. In the first part, Frankl recounts some memories of his own experience in Nazi concentration camps. There, he became a keen observer of how people survived - in the differences between who survived and who didn't, who managed to retain some measure of dignity, who adhered to their own moral code despite being surrounded by immorality and degradation, and who became brutal themselves, who lost the will to live.

This section was, of course, difficult to read, but it was also fascinating. Although I have thought extensively about the Holocaust, I mainly have thought of concentration camps as death camps: places where people were exterminated in mass numbers. Clearly they were that, but they were also forced-labour camps. Frankl relates how he and the other men were forced into slave labour under unimaginably brutal conditions - starving, sick, exposed to the elements, in constant danger of being beaten or murdered, in constant danger of being still further humiliated. Frankl draws one of the clearest pictures of slavery you will read anywhere.

Woven into these descriptions are firsthand accounts of choices made by both inmates and overseers - because, although no one could choose their conditions, everyone, Frankl believes, could choose how they reacted to those conditions. These are stories of small moments of courage, dignity, and heroism, as well as of the descent into sadism and brutality.

In the second part of the book, Frankl describes his theory of human experience and the therapy derived from that theory, both derived (in part) from his experiences in the concentration camps. (Frankl had begun working on the theory and the book before being captured by the Nazis.)

I can't write about Frankl's theory impartially, because it dovetails perfectly with my own worldview, and confirms so many of my core beliefs. According to Frankl, humans' greatest driving force - the primary, most powerful motivation in our lives - is the will to meaning. The school of therapy he founded, logotherapy, is based on the premise that humans must find purpose and meaning in their own lives, and that many psychological problems can be traced to a lack of meaning and purpose.

Frankl himself was a believer in his own religion, and apparently many people find spiritual meaning in his book, but Man's Search for Meaning is not spiritual or religious. Indeed, logotherapy is not prescriptive and does not proselytize. In logotherapy, the role of the therapist is to help people discover their own purpose, not to assign a purpose to them.

The search for meaning in life is not an abstraction, not the same as the so-called "meaning of life". Frankl writes:

Each person's meaning, and the path through which they discover it, is unique to that individual. That meaning is dynamic and fluid, and will change many times over the course of a lifetime. There is no blueprint of a search for meaning. But, according to logotherapy, humans discover meaning in their life in one of three ways. Meaning is discovered through deeds and acts, through love, and through suffering.

Thus far we have shown that the meaning of life always changes, but that it never ceases to be. According to logotherapy, we can discover this meaning in life in three different ways: (1) by creating a work or doing a deed; (2) by experiencing something or encountering someone; and (3) by the attitude we take towards unavoidable suffering.

Frankl answers the latter questions unequivocally. If we can prevent suffering, or remove the cause of suffering, we should and we must. Suffering is not a necessary pre-condition to meaning. There is no crucible of fire through which we all must pass in order to find liberation.

However, life can be full of suffering. There is pain in ordinary existence. And through that suffering, there is potential for meaning and purpose. Whenever a person says, "I'm not glad it happened, but I learned and grew so much from the experience," she has found meaning through suffering.

Every one of us, myself included, who has discovered growth through personal loss or just plain hard times has lived this precept. War resisters who feel compelled to speak out against war, rape survivors who volunteer in a crisis centre, recovering substance abusers who become sponsors - these are all examples of finding meaning in suffering.

Finding meaning in suffering is more than making the best of a bad situation. It's understanding that conflict and pain are also opportunities for growth and personal development - opportunities we would never choose, but which ultimately become part of our strength and our purpose. Because, Frankl believes, humans never lose free will. We can seldom choose our conditions, but we can always choose how we react to those conditions. That is a central teaching of logotherapy.

Several important points made in Frankl's book have become contemporary cliches - overused to the point of having lost all meaning. But that overuse occurred in a different time and context, and shouldn't be held against Frankl. He quotes the German philosopher Nietzsche in two important points, which you will recognize from cubicle decorations and pop-psychology-speak. That which doesn't kill me makes me stronger. and If a man has a why, he can withstand any how. Cliches, yes. But for many people, simple truisms.

In one of the recent updates of this book, Frankl writes of a drug crisis, of people "turning to drugs" because their lives lack meaning. Leaving that aside, I would add that consumer culture leads people to "turn to shopping" for the same reasons. To me it seems clear that consumer culture promotes a life devoid of meaning, what Frankl would call an existential vacuum. People seek to fill that vacuum through consumerism - buy, buy, buy, more, more, more - and through celebrity worship. This is a great boon to the ruling class, who profit by our consumption, our ignorance, and our apathy.

Many people, however, cannot nurture the meaning in their own lives because they are too busy trying to survive. This, then, brings us back to finding meaning in suffering. Every person who is organizing - against water privatization, seed theft, pension theft - against evictions and austerity - every person fighting for a living wage, for child care, for public healthcare and education - is finding meaning from suffering.

Some of the language in Man's Search for Meaning is outdated, and some of the scenarios seem old-fashioned. For example, a disabled man is described as "crippled". Yet Frankl uses this "crippled" man as an example of a person leading a rich and meaningful life, which would have made him very progressive in his era. He uses the word "man" generically, where today we would use more inclusive, gender-neutral language. The need to make minor mental updates shouldn't detract from the value of this book. Man's Search for Meaning is a rich and rewarding read.
Posted by laura k at 9/29/2013 08:30:00 AM