what i'm reading: the maze runner, a youth novel 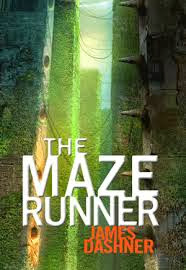 There's a subgenre of youth books in which young people are cast into an alien and dangerous world, where they must struggle to understand their purpose, struggle to survive. If you remember your own adolescence, the metaphor should be obvious.

These books are often characterized as nihilistic or depressing, but I find that's generally the thoughts of people who haven't read the book. While a survival book may be frightening and sometimes violent, it usually offers positive messages about what it takes to survive. Young heroes find inner reserves of strength and courage, and learn how to cope with harsh realities. There is usually a series of tests - tests of moral courage, tests of confidence - and there is often loss, and there is often the discovery of joy in unexpected places. The world may be alien, but the themes are real-life.

In many youth survival books, one element is key to survival: cooperation. A familiar message is that humans must work together in order to thrive. The Maze Runner, by James Dashner, is one such book. There are now four books in The Maze Runner series; I recently read the first. (A movie will be out in 2014.)

When the book opens and we meet main character Thomas, he is completely disoriented, frightened, and confused. He is trapped in a box, which seems to be lifting up, as if in an old mine shaft. He has no memory of how he came to be in this box. In fact, he has almost no memory at all. He knows his first name. And that's it. As Thomas discovers his new life, so does the reader.

Thomas finds himself in a closed world inhabited only by teenage boys. Like Thomas, none of them know how they got here or why.

All they know is that every morning the stone doors to the maze that surrounds them have opened. Every night they’ve closed tight. And every 30 days a new boy has been delivered in the lift. Thomas was expected. But the next day, a girl is sent up—the first girl to ever arrive in the Glade. And more surprising yet is the message she delivers. Thomas might be more important than he could ever guess. If only he could unlock the dark secrets buried within his mind.

Dashner's writing is precise and meticulous. The reader not only gets a vivid picture of The Glade and of the terrifying dangers of The Maze, but is fully aware of what Thomas is thinking - and what he's feeling. I find that many youth books intended to appeal to boys are lacking in emotional content, as if publishers imagine that boys don't need the same validation and understanding that girls do. Thomas experiences a whirlwind of emotions, and the reader is right there with him.

This is an exciting book, packed with both external and internal adventure. However, I would recommend this book to serious readers, people willing to read complex descriptions and to wait for scenarios to unfold. Readers who prefer a book that reads like a movie may be disappointed.