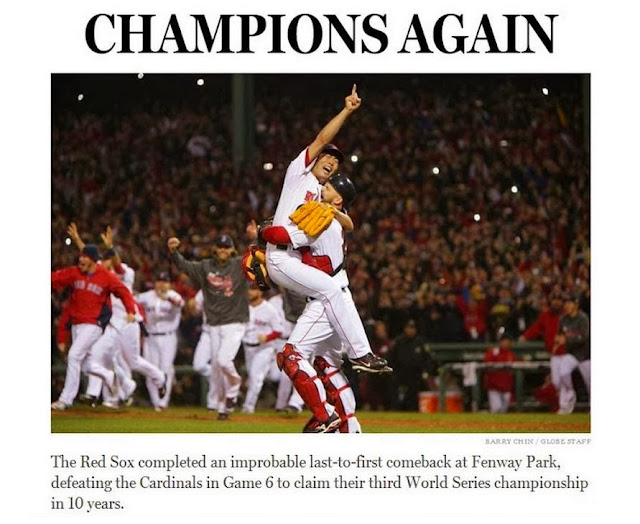 This was a magical season, and the most exciting postseason I've seen in a very long time.

David Ortiz - the only man to play on the 2004, 2007, and 2013 Red Sox teams - will be a hero to the city of Boston and to every Red Sox fan forever and ever, amen. A big man with a huge bat, an enormous heart, and more brains than he gets credit for.

In the world of my personal fandom, sometime during the middle of the summer, between the foot and the flood and the move and the new job, I lost touch with the season. Or, more accurately, I began following the season the way most people do, rather than as an obsessive fan who never misses a game.

Suddenly, in mid-August, I saw the writing on the wall: this team was going all the way. Rarely do you see a baseball team with no weaknesses, and the 2013 Red Sox had it all. After the shock of the 2011 collapse and the abysmal 2012 season, the 2013 team was headed to its third World Series win in ten years.

It was time to climb back onboard and reboot my obsession. I glued myself to the Red Sox and they rewarded me with a September and October I will never forget.