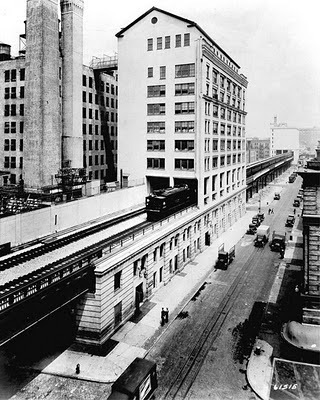 This photo is used in James Gleick's The Information, in which I am currently engrossed. The building is Bell Labs, the hottest of hot spots for engineering and technology for decades, in one of its most famous locations, on the west side of lower Manhattan. (The building is now Westbeth.) The train passing through the Bell Labs building is running on The High Line. You may recall my enthusiastic post about The High Line. Worlds collide.

Looking for this photo online, I found a terrific post about The High Line by Phillip Lopate. Lopate is a writer, critic and thinker who writes about (among other things) architecture, city planning and design. I know him best from an anthology he edited, The Art of the Personal Essay. Phillip Lopate's brother is Leonard Lopate, the host of a long-running radio show on WNYC.

When, in June 2009, the High Line Park opened to the public, it was declared an almost unqualified success. Some architecture critics nit-picked the design, but basically they endorsed it, and ordinary folk (I include myself in that category), less fastidious, greeted it with enthusiasm. Crowds lined up for hours to have the elevated promenade experience, it became a (free) hot-ticket item in New York City, which typically over-embraces a novelty for six months, then ignores it. Especially in hot weather, the challenge soon became to grab one of the reclining benches on the sundeck and tan yourself for hours, while envious masses stumbled by. The crowded, restless carnival-grounds movement of the park-goers above-ground rhymed the pedestrian conveyer-belt effect of the gridded streets below: Manhattan is a place where loitering in one place is done at your peril. Paris has boulevard cafes for cooling one’s heels, Rome comes to a rest at fountains and piazzas, but in Manhattan you keep moving forward. Well and good: I approve.