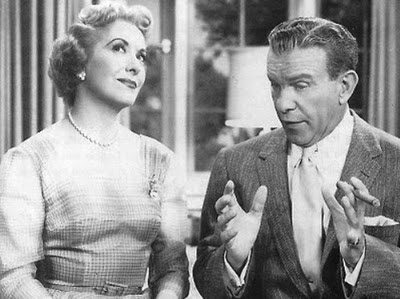 One of my favourite comedies has always been "The Burns and Allen Show," the old TV vehicle for the comedy team of Gracie Allen and George Burns. The show's entire run (1950-1958) was finished before I was born, but in my days as an insomniac teenager and young adult, I would watch late-night re-runs, and I fell in love with this show.

Burns and Allen, who were married, began their act onstage in vaudeville, then moved to radio in the heyday of that medium, then had a popular TV show from the earliest days of television. Gracie was the comedian, playing on her supposedly addle-headed, ditzy, unique way of seeing the world, and George was her straight man. (Interestingly, their stage act originally featured George as the air-head and Gracie as the straight, but Gracie was getting all the laughs, so they switched roles.)

One of Burns and Allen's long-running gags was that George would be poor and unknown if it weren't for Gracie. This reflected real-life common wisdom that Gracie was the star, and George would have no career without her. Gracie retired in 1958 and died in 1964. As you may know, George Burns went on to have an entire second career making movies and doing standup, especially known for his role as God in the "Oh, God" movies. He died in 1996 at 100 years old. 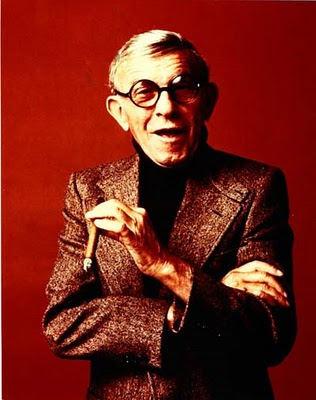 "The Burns and Allen Show", although predictable, corny and dated (and hilarious), had some post-modern touches that put it way ahead of its time. George served as narrator, setting up Gracie's situations, and stepping in and out of the frame. The borders of the set were left visible on a proscenium stage, so George could walk in and out of the action. If you've seen "It's Garry Shandling's Show," where Shandling rode a golf cart to the fake sitcom set, that was an homage to Burns and Allen. The action also stopped for George to do standup on related themes, similar to the opening and closing frames of "Seinfeld". Later in the series' run, George would turn on a TV and watch Gracie and their neighbours, Harry and Blanche Morton - "Let's see what the Mortons are up to..." - while he smoked his cigar and addressed the audience. 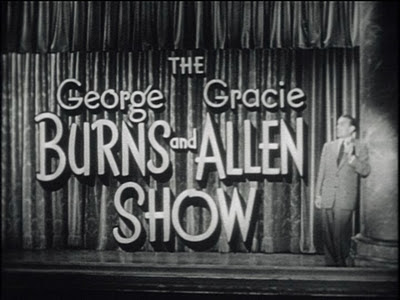 I love The Burns and Allen Show, and I absolutely love Gracie Allen, a comic genius. I hadn't seen the show in years - decades - and I always wanted to re-watch it on DVD. A few months ago, Allan surprised me with more than 100 episodes on DVD, somebody's homemade package being sold online.

We started watching it, thinking we could go through the entire series in order, but we've been disabused of this completest plan. As is often the case with the early days of a great comedy, the beginning was rough. The show needed more time to develop, and was probably still making the switch from radio to television. So instead, we're going to sample various seasons until we find where The Funny begins, and watch from there.

In the early days of television, shows had a single sponsor that was strongly associated with the show, another holdover from radio. The sponsor often enjoyed top billing, such as "Maxwell House Coffee Time" or "Texaco Star Theater". This had mostly stopped before my time. The one show I remember that retained that type of title was "Mutual of Omaha's Wild Kingdom", which people of my generation grew up watching on Sunday nights - "before Disney," as we all said.

Not only did shows have single sponsors, but ads were part of the show, and much more conspicuous than current product placement or other forms of embedded marketing these days. The only analog that I can think of today is (sadly) the in-game advertising we are subjected to during baseball games, where someone sits in the announcer's booth for an inning, and the announcers and the guest "chat" about the product during the game. In these old shows, the ads were performed by the show's "announcer" - another radio holdover, and a precursor of the late-night co-host. This freed the show's star from unseemly shilling, and in George Burns' and other's cases, allowed them to distance themselves with irreverent snarky comments about having to do the ads.

The Burns and Allen Show was sponsored by "Carnation Evaporated Milk, the milk from contented cows". Each show contained two or more scenes in which coffee, or baking, or some form of cooking - or even Gracie receiving a bouquet of carnations! - figured in. Then the comedy stops and the announcer launches into a long spiel about the benefits of Carnation evaporated milk. (For Burns and Allen fans, this is Harry Von Zell*, except for the first season, I was surprised to learn a different announcer, Bill Goodwin, was part of the show.)

In some scenes, the characters themselves extol the virtues of having been raised as a "Carnation baby" or how wonderful the cake was because the icing was made with Carnation evaporated milk, or how silly Gracie wondered how you get milk from a bunch of carnations. It's a full-fledged commercial, but the show doesn't stop, break for ads, then resume, the way we're accustomed to. It's similar to today's embedded marketing, but much cruder. Although who knows, as we continue to mute and skip commercials, this technique might be revived.

* This made the Burns and Allen Show very unusual in having two characters with the same first name, Harry Morton and Harry Von Zell. The latter Harry was already referred to as "HarryVonZell".
Posted by laura k at 12/21/2011 06:30:00 AM