As I mentioned here, I've decided to stop posting my entire "what i'm watching" list for the year. Instead I'm going to do an annual best-of. I'm also realigning this with the calendar.

So... these are the best series and movies I saw from April 2021 to December 2021. Within the two categories below, they are in no particular order. (It's not a countdown.)

Five Stars: the best of the best

The Handmaid's Tale (S1-4, series so far)
This is one of the best series I've ever seen, and the most difficult to watch. S1 especially was so intense, that I could only watch one episode at a time, then needed to switch to something lighter. Why watch a series packed with rape, horrific state violence, fascism, and woman-hating? Because the writing, acting, and production is stellar. Because it feels all too plausible. And because it is a story of resistance. (Special shout-out to Toronto, playing itself for a change!)

Sophie: A Murder in West Cork
This true-crime mini-series was suspenseful and compelling. It sensitively captures the grief that follows a sudden, violent death, and the outrage at the blatant miscarriage of justice.

Lupin (S1-2, series so far)
Joyous cons, daring and brilliant heists, biting social commentary about racism and colonialism, plus a literary meta-theme: it doesn't get much better than this. A perfect series, especially for crime lovers.

Bo Burnham Inside
Burnham filmed, edited, and performed this film, completely solo, while in covid lockdown. It is clever, cutting, incredibly insightful, often profound. The artist manages to perfectly send-up so many cultural trends and tropes, but always with a voice that is warm and compassionate, never snarky or mocking. It left me feeling that I had taken a journey with Burnham. Later I learned he was the creator of 2018 film "Eighth Grade," which was all kinds of brilliant (four stars here). 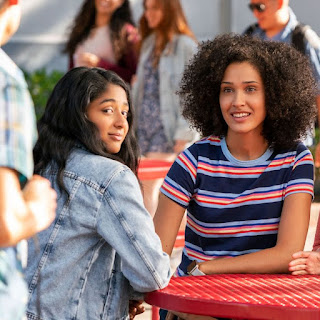 Never Have I Ever (S1 rewatch + S2, series so far)
This is one of the best teenage series ever made. Hilarious, warm, and deeply authentic, it made my heart squeeze with all the joy and pain of growing up. The social commentary about racism and sexism is perfectly woven in, never preachy. The representation of queers and people of colour is beautiful and seems completely natural. And the acting is absolutely amazing.

In the Heights
The film adaptation of Lin-Manuel Miranda's Broadway musical, a love letter to his (and my) former New York City neighbourhood. It's a joyous celebration of a place and the people who create it -- a positive look at something usually maligned -- wrapped in a ribbon of Latin and modern music and dance styles. It was so enjoyable! It also made me regret not seeing the Broadway production, which was running while I was still regularly visiting the area.

Yellowstone (S4)
After the extremely violent, cliffhanger ending of S3, Yellowstone S4 was all about healing, recovery -- and revenge. Some subplots wrapped up with deep emotions, while others are still open to future possibilities. I love the Native issues, the bold female anti-hero who continues to deepen in complexity, and the many visions of what love can look like. This show continues to be absolutely gripping, exploring both external and internal conflicts more deeply with every season.

Four Stars: worth every minute

The Death and Life of Marsha P. Johnson (2017)
A documentary tribute to a transgender woman of colour who was a pioneering activist, and a look at the trans and gay liberation movements through the lens of one person's life. Moving, inspiring, sad, beautiful.

Ted Lasso (S1 only)
This show is sweet, warm, and funny, and manages to be feel-good without being sticky. I hated S2, couldn't get past the first episode, but S1 was wonderful.

Lovecraft Country (S1)
A wild, genre-blending, mind-bending exploration of Jim Crow America through adventure, fantasy, and horror. I stopped watching about halfway through but intend to go back. Weird and captivating.

Derry Girls (S1-2, series so far)
Teenage girls coming of age in Northern Ireland -- Catholic school and family madness against a backdrop of The Troubles. Wonderful characters, warm humour -- and another feel-good show I could tolerate. That makes three this year, which must be a record for me.

Mare of Easttown (one season, full series)
A female detective trying to solve a murder and disappearances, while coping with her own loss and grief. The premise sounds hackneyed, but the show feels new and authentic. Excellent acting by Kate Winslet, many fully realized female characters, and a strong portrayal of gritty, downtrodden, small-town America. A dark show, with just enough hope. 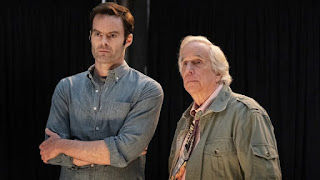 Barry (S1-2, series so far)
A darkly funny crime comedy with great characters and some outstanding performances by Bill Hader, Henry Winkler, and many others. S3 is supposed to be out this year, which is a great excuse to rewatch the series so far.

Your Honor (one season, full series)
Both a crime drama and an intimate family story, Your Honor explores what happens when deeply held moral beliefs clash with profound love and loyalty. Like The Handmaid's Tale (above), this series is unrelenting, with zero comic relief. It starts in a dark place and goes down from there.

The Frontier (2015)
A tense, stylish, dark crime/neo-noir, chock full of double-crossing thieves and creepy characters, with a claustrophobic feel. Really fun stuff if you like noir.

Lucifer (S1-6, full series)
Hilarious, sexy, raunchy, genre-blending, and thoroughly entertaining, Lucifer is part detective/cop show and part "Buffy the Vampire Slayer". Major points for full-on bisexuality in both male and female characters, and some truly meaningful and sometimes profound character growth. Also: worst series finale ever. Honestly, I can't believe how bad the last 30 minutes of the show were.

A Song For You (2016)
This documentary chronicles and pays tribute to "Austin City Limits," the greatest TV music show of our time. I don't have access to it anymore, and I miss it -- both to watch great performances and as a way to discover new sounds.

Loudermilk (S1-2 only)
A dark comedy about a recovering curmudgeon. Really good, until it wasn't.

Line of Duty (S1-5 rewatch + new S6)
Suspenseful, twisty, unpredictable thriller about police corruption. Not your typical cop show by any means. Who is H?

Goliath (S1-3 rewatch plus new S4)
Crime, noir, paranoid thriller, legal drama -- all of those, plus some romance and family drama. I was grossly disappointed by S4, but loved the first three seasons.

Money Heist S5 (final season)
I didn't know how they would keep this series going after S2. Every successive season seemed even more improbable than the last, but somehow it just got better and better, adding layers to backstories and relationships. The final season was gripping and very emotional. Add The Professor to the list of my favourite anti-heroes.

The Hitch-Hiker (1953)
An odd and slightly surreal noir, with the distinction of being written and directed by the great Ida Lupino.

True Grit (2010)
Great characters, including a strong young female lead, lots of western-style violence and more than a little humour -- a really solid movie. Part of my ongoing new interest in the Modern Western genre.

The Blacklist S8
In S8, Raymond Reddington (or whoever he is) falls in love, and lets himself believe he can carve out a normal life in the midst of his chaos. This season had a deep emotional resonance, in addition to the show's usual suspense, adventure, violence, and humour. I found Red's love interest much more credible than any of Elizabeth's relationships. I continue to love both Raymond and Dembe, and will follow them anywhere.

Corporate (S1-S3, series so far)
I kept expecting this show to tank. How long can a satirical workplace comedy spin before it becomes a parody of itself? To my surprise, the show stayed funny, dark, relevant, and unpredictable. The episode "Black Dog" (S3e2) is the best portrayal of the illness of depression I've ever seen in popular culture -- unexpectedly emotional and real, while never losing the comic edge. Bravo.

A note, a plea: please, please, won't someone show us what women really look like in proper context? A tough, gritty TV journalist in West Virginia, covering stories of coal mines and mountaintop removal, would not go to work in full, professionally-crafted makeup. The portrayal is supposed to be realistic -- so why not tone down the glamour? As soon as I see the beautiful Reese Witherspoon in full Hollywood-style makeup, I'm pulled out of the show and am looking at the actor instead of the character. I see this in many supposedly realistic series. Obviously all actors are wearing makeup. But why not use a look that's somewhat realistic? Major points for series that don't do this, like Mare of Easttown.

Well, yes. For mental health in general. But you'd have to watch the entire series -- which everyone should do anyway.

For a single episode, something you could digest in one sitting, Black Dog.

On women looking like women - I read that in a sex scene in Mare of Easttown, they were going to edit out her belly in post, but Winslet told them to leave it - it's the stomach of a middle-aged woman who's had a kid.

If you liked "End of the F*cking World" then you might love "Wayne."

Marie, thank you for sharing that! I knew Winslet must have had something to do with the normal-looking women in Mare.

I *loved* End of the F*cking World. Just looked up Wayne, definitely looks worth a try. I had never heard of it, so thanks for that!

Brush up your hs French: Call my Agent

John Goldfine, suffice to say it appears we have very different viewing tastes. :) Although I might try Queen's Gambit long after the hype dies down.