what i'm reading: running the books: the adventures of an accidental prison librarian

I read this book many months ago. I'm still catching up from my involuntary blogging hiatus.

Last year I read and wrote about The Maximum Security Book Club: Reading Literature in a Men's Prison. I found it extremely disappointing; if you read the review, you will catch my understatement. 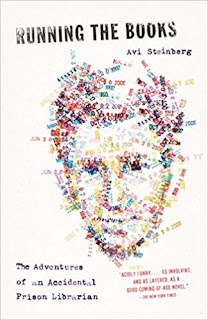 Avi Steinberg's Running the Books starts out disappointing, but once it kicks in, is a wonderfully satisfying and beautifully written book. When we meet Steinberg, he is somewhat adrift, having abandoned his religious studies at Yeshiva University, escaping to Harvard, but graduating with no discernible direction or passion to find one. The writing is snarky and self-deprecating; the tone is pure staccato. I thought Running the Books might be one of those "guy reads" that I find shallow and irritating.

But when Steinberg accepts a position as a prison librarian -- with no experience in either prisons or libraries -- the writing slows down, and it blossoms. Perhaps the early tone was meant to reflect Steinberg's state of mind at the time, because one thing becomes very clear: this man can write.

Steinberg introduces the reader to the prisoners -- both men and women -- who frequent his library, with a keen eye for detail, a wry humour, and a voice suffused with compassion.

The library is a prison hang-out, a somewhat less supervised space where inmates can interact a bit more freely. In this way, Steinberg is witness to interactions an outsider normally would never see. Steinberg also runs a writing class, where inmates reveal bits of their lives and emotions.

The library also functions as an underground post office: prisoners leave each other messages -- known as "kites" -- in books. Many of these messages are romantic in nature, as the male and female inmates live in separate areas, and their paths rarely cross. Steinberg is supposed to destroy these notes, but he cannot bring himself to be so punitive about communication. He copies the messages into a notebook, and they form a sad, lonely core at the heart of this book.

I really liked Steinberg's writing, but I liked his point of view even more. He writes about the inmates with open eyes, not trying to romanticize or sugar-coat their crimes, but also with an open heart, one that recognizes the social complexities that may bring one person to prison and the other to rehab, with completely different outcomes. He is clearly changed by his experience, but he leaves it up to the reader to judge both how he changed, and how much.

Reading Steinberg's book revived my interest in volunteering at a prison library. One future day, when I am no longer a local union president, I hope to see that through.

A reader at this earlier post suggested The Prison Book Club by Canadian writer Ann Walmsley. A review of that book and the controversy that followed is here. I have it on my list.
Posted by laura k at 6/30/2018 10:40:00 AM