national portrait gallery? no, it's the national harper gallery!

Quick, get a dictionary and look up megalomaniac. See if it shows Stephen Harper's picture. Then again, maybe Harper had none to spare.

I missed it when Kady O'Malley and Elizabeth May broke this story, so I'm glad I saw this in the Ottawa Citizen. Emphasis mine. 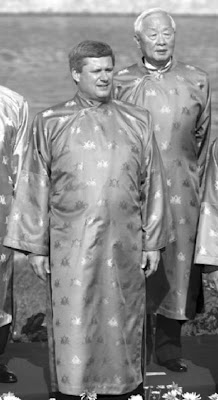 Harper gallery leaves MPs speechless
Citizens who really want a national portrait gallery in Ottawa can rest easy. The government already has one.

All you need to get in is a Commons security pass, a Conservative party membership and a keen desire to view exclusive pictures of Prime Minister Stephen Harper, exclusively.

Photographs of Mr. Harper in various poses, at various sites, are hung throughout the private and cosy government lobby of the House of Commons.

Ms. May and Ms. O'Malley were surprised and a bit speechless when they saw the exhibit recently as guest Commons Speakers during a youth Parliament.

"When you walk in the door, all you see are pictures of Stephen Harper," said Ms. May

A press aide to Mr. Harper said he would get back with an explanation, but didn't.

When the party last year unveiled its election campaign war room, Mr. Harper stared out from campaign posters on every wall.

NDP MP Paul Dewar, who has never seen the interior of the Conservative lobby room, made a joke based on Mr. Harper's admitted preference for running a tight ship and keeping an eye on things. "If you're ever wondering who's in charge, just look at the wall," said Mr. Dewar.

One Conservative said the Harper photos have been up for at least three months.

Another, Calgary MP Deepak Obhrai, was a bit reluctant after question period to talk about the exhibit, possibly because another Tory, Secretary of State Jason Kenney, happened to be walking by just at that moment.

"Well, this is the Harper government," said Mr. Obhrai.