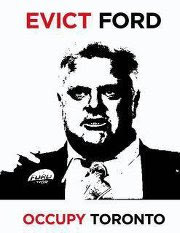 In just a few weeks, the Occupy movement has become a global phenomenon, with over 1,400 protests worldwide. In Toronto, a peaceful occupation has been underway at St. James Park, raising demands for economic and social justice for everyone. Polls in Canada show that a clear majority of people support the protests.

But now Mayor Rob Ford is trying to evict the protesters. We think it's time to evict Rob Ford instead. Ford's attacks on good jobs, public transit and city services has turned public opinion against him - and in every ward of the city. While the millionaire mayor spends millions on high-priced consultants, he's trying to make ordinary people pay for the economic crisis.

We won't let him do it. Please join us this Saturday to be part of a city-wide rally and march. Show your support for the Occupy movement, and its demands for a better world for everyone.

"You can't evict an idea whose time has come!"