monday in toronto: "my own government labeled me a terrorist and attempted to murder me"

My own government labeled me a terrorist and attempted to murder me. My story is strongly relevant for activists today in this climate of an unending 'war on terror.'

S. Brian Willson, a Vietnam War veteran and peace activist, will launch his memoir, Blood on the Tracks, in Toronto on Monday, November 7, at an event to benefit the War Resisters Support Campaign. 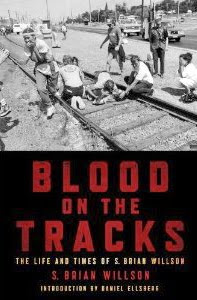 Twenty-four years ago, Willson lost both his legs when he was run over by a United States government munitions train during a nonviolent blocking action. He now gets around on two prosthetic legs and a three-wheeled handcycle.

Willson will be joining US Iraq War resisters who are seeking permanent resident status in Canada to talk about how his wartime experience transformed him into a peace activist.

Willson served as legislative aide to Massachusetts State Senator Jack Backman (Brookline), working on prison, mental health, and veterans' issues, and directed a rural veterans outreach center. He was presented with a special award for his work with veterans by Massachusetts Governor Michael Dukakis. In 1984, he was one of 12 Vietnam veterans credited with helping Senator John Kerry (D-Mass.) win a hard-fought US Senate seat in his first campaign.

In 1986, Willson was one of four veterans who staged a 47-day, water-only fast on the steps of the US Capitol in Washington, DC in response to the Reagan administration's funding of the Contra terrorist wars in Central America. He was officially recognized by the Massachusetts State Senate for his "courageous participation" in the fast.

One year later, on September 1, 1987, he was run over and nearly killed by an accelerating US Navy train while engaging in a well-publicized, nonviolent blockade in protest of weapons shipments to El Salvador.

Join us for dinner and conversation with S. Brian Willson. Willson will be signing copies of his book.