michael moore: canadians need to get in touch with their inner hockey stick

Did you hear Michael Moore has offered our hero Brigette DePape a job? I hope she has many such excellent opportunities coming her way. A young woman with that much courage, poise and determination should have a bright future as a rabble rouser.

Michael Moore, the high-profile American activist and filmmaker, has offered a job to the Senate page who was fired Friday for her stunning protest against Prime Minister Stephen Harper.

Moore, famous for films such as Bowling for Columbine and Fahrenheit 9/11, posted a link on Facebook offering her work after hearing that she was fired.

"For a young person to do that and to do it peacefully, and quietly and with grace, I thought it was a very powerful moment," Moore told The Canadian Press on Sunday from New York.

"Every now and then there is an iconic moment where an individual takes action, and it inspires others to think about, you know, what else would we be doing."

Moore has become 21-year-old Brigette DePape's most prominent supporter, posting a photo on his website showing her holding up a "Stop Harper" sign in the Senate chamber during Friday's throne speech.

The prominent filmmaker and left-leaning political commentator has been a leading voice against big corporations, gun ownership, the Iraq War, and the American health care system. He is a longtime critic of Harper's Conservatives, routinely urging Canadian voters to vote for another party.

When contacted with news of Moore's support, DePape reacted with excitement — even briefly breaking into a giggle with a friend — before regaining her composure.

"It's nice to have the support of people who think critically," DePape said by phone on Sunday.

Moore said a functioning democracy should "encourage you to be disrespectful, to question what is going on."

"I think that Canada and Canadians probably need to put aside the full respect thing and bring out their inner hockey stick and get to work on preventing their government from turning into a version of ours," he said.

DePape said she has no regrets about the incident and remains convinced the best way to stop the Harper government is through acts of civil disobedience.

"I really think it's only through inappropriate action that you can challenge the status quo and have real change," she said, adding that she's been overwhelmed by positive feedback from Canadians. "It's been really inspiring."

More than a dozen Facebook pages in support of DePape have already popped up, with names such as "Canadian hero" and a "True Canadian Patriot."

"You are such an encouragement for this old WWII veteran and I so admire your courage and commitment to this just cause for which you stand so bravely," said a comment attributed to Bruce Jones that was posted on one Facebook page.

And because you can't see this often enough... 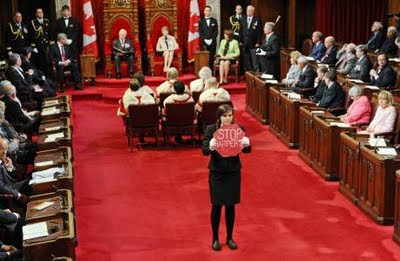