Did the City of Toronto paint over a mural because a figure in it resembled Stephen Harper? Or was the mural eradicated because it bears an anti-capitalist message? Or perhaps a little of both. 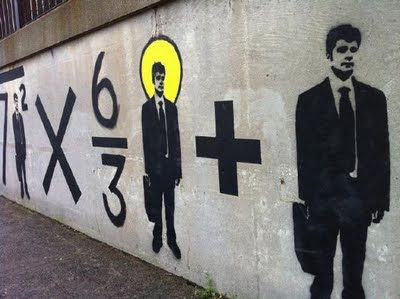 In early June, artist Joel Richardson said the City of Toronto painted over a mural that it had commissioned him to create.

A city spokeswoman says the railway underpass wall was returned to drab grey because Richardson’s artwork was unauthorized, uncommissioned, political and may have “referred to (Prime Minister) Stephen Harper.”

Elyse Parker, a director in the city’s transportation services department, said the artwork was erased after a resident complained it was political. City records suggested the older north wall mural was commissioned, but not the one on the south wall, she said.

“This was not approved by the city and we would not endorse any kind of mural with political messaging,” she said. “There was some discussion that the mural referred to Stephen Harper. That’s the suggestion, that’s what it looked like to us.”

Richardson says the mural “had nothing to do with Stephen Harper” — while it is “subversive and anti-freewheeling capitalism” — and his friend Benjamin Blais was the model for the businessman.

Vic Gedris, who runs the Junction Triangle website and led the Jane’s Walk that saw participants question Robertson about his mural, said the city recently painted over graffiti by “Posterchild” in a different, nearby underpass depicting Harper in riot gear.

Masud Sheikh, a Facebook friend of mine, saw this story and wondered: "Is Canada of today like U.S. of 1933? Masud was referring to a similar incident on a much grander scale: when Mexican muralist and socialist Diego Rivera tangled with Nelson Rockefeller about the murals for New York City's Rockefeller Center.

Rivera was commissioned to create murals for the interior of the soaring Art Deco skyscrapers, but Rockefeller was incensed when he saw that the face of Vladimir Lenin and other revolutionaries appeared in the finished artwork. Rockefeller first ordered Rivera to change the mural. When the artist refused, Rockefeller ordered the mural hidden behind a drape, then eventually, destroyed. (The incident is portrayed in Tim Robbins' movie "Cradle Will Rock," with Ruben Blades playing Diego Rivera.) 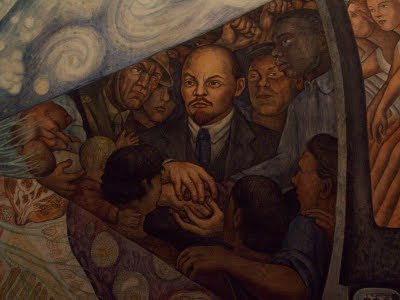 This bit of history resonates with me on so many levels: Diego Rivera, E. B. White, New York City, Rockefeller Center (where I used to work), political art... and even a tiny echo from my own life. Rivera eventually recreated the destroyed portion of the mural for the Palacio de Bellas Artes in Mexico City. When Allan and I were in Mexico City in 1994, the Palacio was closed - officially for renovation, but no renovation was underway. In reality, during the Zapatista uprising in the state of Chiapas, the Mexican government was hiding Rivera's revolutionary messages.

E.B. White immortalized the Rockefeller Center incident in the poem "I Paint What I See," which ran in The New Yorker on May 20, 1933, while the controversy was ongoing. The mural was destroyed on February 9, 1934. This interesting page has links, photos and videos with more context. And this page, from the Toronto neighbourhood Junction Triangle has more details about the Toronto incident.

'What do you paint, when you paint on a wall?'
Said John D.'s grandson Nelson.
'Do you paint just anything there at all?
'Will there be any doves, or a tree in fall?
'Or a hunting scene, like an English hall?'

'I paint what I see,' said Rivera.

'What are the colors you use when you paint?'
Said John D.'s grandson Nelson.
'Do you use any red in the beard of a saint?
'If you do, is it terribly red, or faint?
'Do you use any blue? Is it Prussian?'

'I paint what I paint,' said Rivera.

'Whose is that head that I see on the wall?'
Said John D.'s grandson Nelson.
'Is it anyone's head whom we know, at all?
'A Rensselae, or a Saltonstall?
'Is it Franklin D.? Is it Mordaunt Hall?
Or is it the head of a Russian?

'I paint what I think,' said Rivera.

'However . . .
'I'll take out a couple of people drinkin'
'And put in a picture of Abraham Lincoln;
'I could even give you McCormick's reaper
'And still not make my art much cheaper.
'But the head of Lenin has got to stay
'Or my friends will give the bird today,
'The bird, the bird, forever.'

'It's not good taste in a man like me,'
Said John D.'s grandson Nelson,
'To question an artist's integrity
'Or mention a practical thing like a fee,
'But I know what I like to a large degree,
'Though art I hate to hamper;
'For twenty-one thousand conservative bucks
'You painted a radical. I say shucks,
'I never could rent the offices-----
'The capitalistic offices.
'For this, as you know, is a public hall
'And people want doves, or a tree in hall
'And though your art I dislike to hamper,
'I owe a little to God and Gramper,
'And after all,
'It's my wall . . .'

Update: Please see comments for links and updates on similar recent incidents that I neglected to include in this post. Feel free to post more if you know of any.
Posted by laura k at 6/14/2011 05:00:00 AM