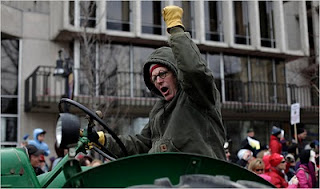 As the senators walked around the Capitol square, where one of the largest protests in what has been a daily outpouring of union employees and supporters was under way, the crowd pressed in to shake hands and shout words of encouragement. Many called the senators by name, a fact that caught some off guard.

Senator Timothy Cullen was visibly moved and called it his greatest experience as a public official. “We heard about how strongly they felt,” he said. “But you have to be here to feel it.”

The size of the crowd, which the Madison police estimated at around 100,000, and the amount of positive energy was striking, coming a day after the long battle over the bill was lost, though legal efforts were under way to keep it from taking effect.

For weeks the rhythmic chanting of protesters has filled this city like a heartbeat, proof that despite the lack of legislative power, the political left in this state is still a visible, and audible, presence. At the very moment that the noise was expected to fade in disappointment, that thumping proof of life — the staccato refrain of “This is what democracy looks like,” was the most popular of the chants — continued with renewed vigor.