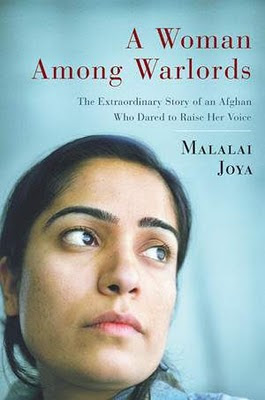 As you may know, Afghan writer and activist Malalai Joya has been denied entry to the US. Joya opposes the Western occupation of her country, and with a clear majority of USians now opposing the war in Afghanistan, those who profit from the occupation want to prevent her injecting public opinion with facts and motivation.

I saw Joya speak - report here and here - and I know the peace movement in the United States needs her.

When Immigration Minister Jason Kenney's flunky stupidly declared former UK MP George Galloway "inadmissible" to Canada, the ensuing publicity for Galloway's tour became Jason Kenney's nightmare. Eventually that nightmare ended up in court, and Galloway is now a regular guest of peace activists in Canada. I hope the US peace movement will get behind Joya's visit in a similar way. [For details on that, click on the wmtc category "george galloway in canada".]

United for Peace and Justice, the umbrella coalition of 1,400 US anti-war groups, has four ways you can help.

1. Have your elected representatives sign onto a letter urging the US Embassy to reconsider their decision.

Six Congresspeople and three Senators have sent such a letter, which is posted at here and here.

Ask your Senator or Representative to send a similar letter as soon as possible.

2. Sign an online petition demanding Malalai Joya be granted a visa to the US.

3. Attend one of the many events organized for Malalai around the country.

Whether Joya is allowed to enter the US or not, the events will go on as scheduled, with Joya appearing either live or by video. Transform these events into declarations of your right to free speech and free association.

Contact local and national media, urge them to cover Malalai Joya's visa exclusion. The denial of a visa to Afghanistan's most intrepid and well known feminist should make headlines! See the Afghan Women's Mission's media release for details.