twenty years since oka: a talk by ellen gabriel 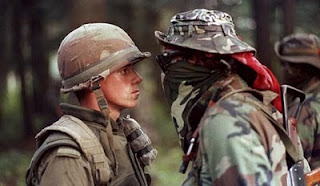 Yesterday marked 20 years since the start of the incident known in most of Canada as the "Oka Crisis". Before coming to this country, I had never heard of Oka. At the the Marxism conference in late May, I attended a talk called "20 years since Oka: the fight for indigenous sovereignty," given by Ellen Gabriel.

Clicking around various stories online yesterday, I saw so many ugly, racist comments about Oka - praising the heroic Canadian soldiers for not simply exterminating the Mohawk resistance, trashing Mohawks as terrorists and cowards, and using the date as an excuse to malign all Native peoples. I'm going to use this occasion to write about what I heard from a woman who was behind the barricades herself. My notes and my memory can't convey the passion and eloquence of Gabriel's talk, but perhaps I can honour her with this small gesture.

Ellen Gabriel is the President of the Quebec Native Women's Association and holds many other titles and distinctions within her Mohawk nation and within the larger Native community. She used the words "Oka crisis," reluctantly, and in quotes. To Gabriel, this was not a one-time crisis, but one episode in the context of hundreds of years of resistance, generations of struggle - for sovereignty and autonomy, against racism and oppression - a struggle that continues today.

For Gabriel, the Indian Act made aboriginal people wards of the state - legal children - and that parent-child construct still exists. The Canadian government and private corporations licensed by the government take resources from Native land, then dole out some of those profits to Native communities as they see fit. Gabriel doesn't want deals for better royalties. She wants Native nations to be treated as the sovereign nations they are, and to see her people control their ancestral lands.

To the young Native activists in the room, she said, "Do not bomb or do violence in our name. Peace is our way." She said the "myth of the warrior" is often misunderstood: true warriors do not promote violence. A warrior understands her true nature, and works for the good of her people.

Gabriel said the Mohawk community is usually divided about development on their lands. Many people, often residential schools survivors, live with an internalized oppression, thinking "at least we're getting this, it's better than nothing". Oka, she said, was one of the few times that the community showed real unity.

A private developer wanted to cut down a forest that had been part of the Kanesatake community for centuries. The forest, which developers wanted for a golf course, included pineland and a burial ground with standing tombstones. The Mohawks previously had filed a land claim for the area, but the government rejected the claim.

Ottawa set a deadline for comment on the development that was impossible to meet. The golf course went ahead, and now the developers wanted more land for condos. The Mohawk community said, Enough. They erected a barricade and held the developer off their land.

On July 11, 1990, a SWAT team moved in. There was a standoff for three hours, then Sûreté du Québec (the Quebec provincial police) threw tear gas and concussion grenades, and opened fire.

Gabriel said that the barricade, which remained up for for 78 days, was not on a highway, as often represented in the media. It was on a dirt access road. The highway wasn't blocked until the police blocked it themselves. The Kanestake resistance community staffed the barricades around the clock, sometimes with 20 people, sometimes with two people, depending on who was available.

Resistance grew, joined by solidarity actions across Canada and the US. As the Kanestake Mohawks refused to dismantle their barricade, the SQ erected a highway blockade to restrict access to Oka and Kanesatake. Other Mohawks blockaded the Mercier Bridge, which connects the Island of Montreal to the South Shore suburbs, where the bridge passed through Mohawk territory.

Gabriel said that the Mercier Bridge blockade, so condemned by local residents, undoubtedly saved lives by blocking a second attack by the SQ and RCMP. Behind the barricades, the people of Kanestake were denied food and medical care. They set up a health centre, and a system for food to be delivered in secret. The SQ would block food deliveries long enough for the meat to spoil and become inedible. They would block of basic supplies, medical care and diapers.

When it was clear the SQ had lost control of the situation, the RCMP was brought in. But they, too, could not contain the resistance. Gabriel spoke with kindness for the individual troops: "They were only kids themselves." Her focus was solely the government that sent them there.

At the height of the standoff, the Mercier Bridge and three highway routes were all blocked. There were huge traffic jams. Local Quebecers burned and hung effigies representing Mohawks. This racism was echoed in - and stoked by - local media, especially on the radio. An MP said the Native people of Quebec should be deported to Labrador. Some Châteauguay residents started building an unauthorized four-lane highway around the Kahnawake reserve. (The Quebec government later finished the highway.)

When an SQ officer was killed, and everyone assumed a Mohawk did it. Gabriel says this has never been established. To the people who were inconvenienced by the bridge blockade, every Mohawk was a terrorist. Mohawks who were arrested were beaten and tortured.

Gabriel said that during the standoff, "We thought we were alone." Only later did they learn that there were solidarity rallies all over Canada, from other Native communities and from Canadians who stood beside them. But, she said, "I never felt so safe as I did with my community during that time. There was peace behind the barricades."

On August 12, Kanestake leadership wanted to sign an agreement, because they were starving. But the negotiations were only focused on breaking the blockades. International human rights groups later agreed that Canada and Quebec did not negotiate in good faith, and that the Mohawks' basic human rights had been denied.

Eventually some Mohawk men wanted to open the Mercier bridge, and talks broke down. The Kanestake Mohawks learned this through the media. By the time they knew, the army was already there. "The ink wasn't even dry," said Gabriel, when the SQ broke the agreement, storming the area and brutalizing anyone in their path.

It is often said that the Mohawks had an army tank, and military-grade weaponry. Gabriel said this tank was never found. It couldn't have been found, since it never existed. She herself never carried a weapon, and she is grateful for that, "because carrying a weapon changes you."

The siege ended on September 26, after 78 days. The resistance was evacuated with ruthless brutality. Women were cut with bayonets. People were thrown to the ground, beaten and kicked. The Kanestake later tried appealing Quebec's human rights commission, but were told the commission had no jurisdiction over Native claims. How convenient. We can take your land - that's in our jurisdiction - but if you try to speak up about how we treat you, that is not.

One year later, the Kanestake commemorated the resistance with a march through Oka. Gabriel said many incidents have occurred since that are seen as retaliation and punishment for the Oka resistance: punitive arrests, arson. But for the Mohawk nation, this story didn't begin with Oka. It began almost 300 years ago, when French Catholic priests stole the land.

"We are not a 'minority' to be seen as a problem," Gabriel said. "We are a sovereign nation, and our identity is linked to the land. That is why the government has tried so hard to break us, so that they can fully exploit our land." Right now, she said, the Mohawk people are joined with the Quebec Farmers' Association in a battle against mining interests. "Our water is already contaminated," she said. "We don't want royalties. We want them off our land."

Within the context of the struggles of aboriginal people, Mohawk women have another level of struggle. The Indian Act, Gabriel said, was designed to undermine the primacy of native women. Mohawk women own the title to their land, and this concept runs contrary to the band system set up by the Canadian government. She also said that Mohawks tend to be less assimilated and more radical than some other nations.

Gabriel spoke very forcefully about the travesty of Canada not signing the United Nations Declaration on the Rights of Indigenous Peoples, a shame this country shares with the United States, Australia and New Zealand. The Declaration includes reconciliation with modern governments. The Mohawks, Gabriel said, are willing to do that, "but we need a government that respect the rule of law."

"We Natives," she said, "know a lot about Canadian history, but Canadians know very little about us."

She listed a few books and movies about Native struggles that she recommends, which I asked her to list later.

There are a series of documentaries about by Alanis Obomsawin the most famous being "Kanehsatake: 270 Years of Resistance". Other films Gabriel mentioned were "Rocks at Whiskey Trench," "Smoke Signals," "Muffins for Granny," about residential school survivors, "Stolen Continents" and "Indian Givers".

In an MSNBC story about the 20th anniversary of Oka, Gabriel is quoted.

Even at the height of the crisis, he said, Ottawa refused to budge while he struggled to find common ground between the Mohawk leaders and the government. Ottawa dragged its heels, and continues to do so today, [former Quebec native affairs minister John] Ciaccia said.

It's an opinion echoed by Ellen Gabriel. In 1990, the then 31-year-old firebrand acted as chief Mohawk negotiator, working alongside Ciaccia to bring an end to the stalemate.

Now president of a native women's association, she says Oka's only legacy is a greater awareness of native issues across Canada. "If anything it was a waking up," she said, adding that people realized "in a simplified, clichéd way, there are still ongoing Indian wars."

The initial transfer of the Oka land took place in 1717, when France gave it over to a missionary group. "It's a 290-year-old fight," said Gabriel. "So history's not changing. It's business as usual as far as the government is concerned."

I'll close with one last thing that Ellen Gabriel said. She believes that the solidarity demonstrations and the public pressure on behalf of the Mohawk Nation was tremendously important. "Without your solidarity, the outcome would have been much worse. Without the eyes of Canada and other Native nations watching, I might not be here to talk with you today."
Posted by laura k at 7/12/2010 01:00:00 PM