We had a nice, relaxing trip to Stratford, maybe less exciting than last year, but only because my first time was a revelation, and this year I knew what to expect.

Stratford is a lovely little tourist town, and I highly recommend the Across the Bridge B&B owned by our friends Eric and Kelly. It's a beautiful old renovated house in a great location; you can leave your car at their place and walk everywhere. But the real reason to stay there is Eric's incredible breakfasts, which will keep you going til dinnertime.

Besides theatre, none of our other plans worked out. We didn't meet our friends for dinner and didn't go to St. Jacobs. But we hung out with Eric and Kelly, walked along the Avon River and took photos of birds, browsed in bookstores and generally decompressed.

Neither of us particularly liked the production of As You Like It, but The Tempest was excellent, a real treat. The productions couldn't be more different. AYLI was crammed full of gimmicks, most of which struck me as superfluous, a bunch of meaningless clutter. The Tempest was spare and stripped down, highlighted by a few brilliant costumes - most notably for Ariel and Caliban - and a handful of light and sound effects that, because they weren't overused, were very effective.

AYLI, unfortunately, featured performances that weren't up to the high standards of a world-class Shakespeare festival; I wondered if the busy production values were supposed to compensate for that. The performances in the Tempest were so good that I heard the whole play anew.

Christopher Plummer was brilliant, living up to expectations, fully inhabiting the role. But the real show-stealer was Julyana Soelistyo, playing Ariel. Her performance was breathtaking. Scenes between the heavy, powerful, aging magician Prospero and the delicate, nimble spirit-servant Ariel were mesmerizing. At the breakfast table in our B&B the following morning, everyone was buzzing about Ariel.

I don't want to say too much, because some of you may still catch this show. If you can, it's worth it.

Also in Stratford, lovely swans and some baby ducks. 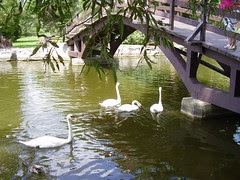 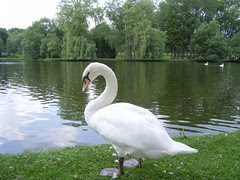 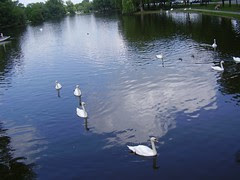 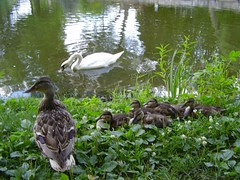 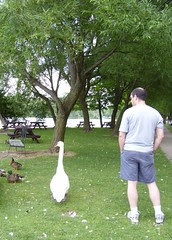 These swans are big!