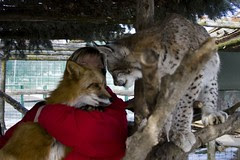 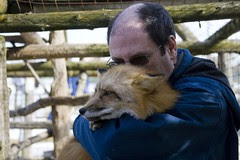 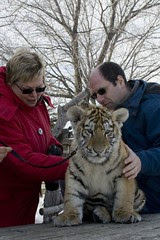 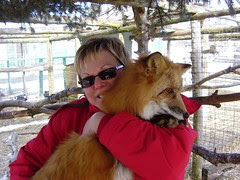 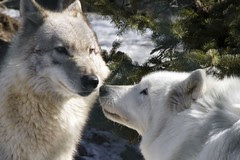 Earlier this week, we visited Jungle Cat World, about an hour east of Toronto, with our friend J. Last summer, J and I discovered we shared a love of wild canines, and when I told her there was a wolf centre in driving distance from Toronto - long on my to-do list - we immediately started making plans.

In July, J and her partner C (who are both war resisters) and Allan and I had a great day at the Haliburton Forest Wolf Centre, and we all vowed to return in the winter, when the wolves' coats are thick and the animals are much more active. Since then, I had been planning on doing this - we started to make plans - then learned the Wolf Centre is only open on weekends in the winter. I was sooo disappointed. There's no way I can take a day off work for that.

Somewhat as a consolation prize, J suggested we go to Jungle Cat World. J is a regular visitor there - the staff knows her by name, and she knows all the animals' names, their histories, and their personalities. It was pretty amazing to see two wolves trot over to the fence and greet J with obvious signs of canine happiness! J has known the male wolf since he's a cub - she has cuddled with him and rubbed his belly more than once. But now that he's in a breeding pair, no play allowed.

First we walked through the park and saw all the animals, then we did another walk-through to watch the daily feeding. The keeper, dragging a sled full of raw meat behind her, told us about the different animals, both the individuals we were seeing and their species, which are all at high risk for extinction. She is clearly very attached to all the animals and committed to their welfare.

When we were walking around by ourselves, before the feeding, we spent a long time admiring the magnificent arctic wolf. She's alone right now, as the park works on finding her a partner (apparently it takes a very long time to transfer an animal from one facility to another).

Suddenly, Bianca, the white wolf, threw her head back and started to howl. The other wolves in separate enclosures all picked it up and began to howl, too. The three of us looked at each other in amazement, and just stood there drinking it in for as long as it lasted. The sound was so beautiful; it gave me chills. When they finished and I could breathe again, J said, You guys have seen something special. That doesn't usually happen.

After the animals ate, we had our "meet-and-greet", which J arranged in advance. You can interact with your choice of three animals. (That is, three of those that are available for human interaction. I don't think they let you in the enclosure with full-grown lions.) We chose the tiger cubs (which counts as one), the fox and the bobcat.

The tiger cubs are about 5 months old and weigh around 60 pounds. J played with these same cubs when they were only six weeks old, and the size of housecats! We saw a pair of tigers that are about one year old, and look pretty big... until you see the full-grown pair, which clock in at about 600 pounds each. The female is pregnant again, and J and I are going back as soon as the babies are old enough to handle. 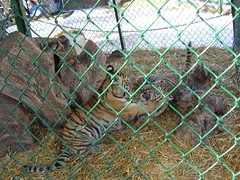 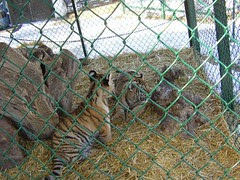 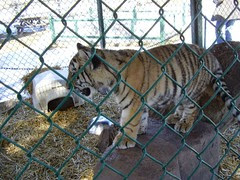 Even though I had a great day, I still have mixed feelings about seeing wild animals in captivity. These animals are very well cared for, they have interaction with other animals, and with humans. Most of them were hand-raised, and they clearly enjoy the stimulation of human interaction. Some were rescued from neglect or abuse; our fox friend was rescued from a fur farm. The rest were all born in captivity in zoo breeding programs. All their species are heavily endangered. Jungle Cat World does outreach and education about endangered species, especially big cats. All good.

But still, there's something painful about seeing a captive wolf. This is the main reason I haven't yet been to the Toronto Zoo. I used to love zoos, and I hear the Toronto's is a wonderful place, but... I don't know. It makes me a little sad.

On balance, I think it's a great place and I'm definitely going back to play with baby tigers.

Not least of why this was such a great day: I took a day off. A real day off, not a "day off" getting my hair cut or going to the dentist. It was heavenly - and my last one until my term ends on April 6.

A selection of our photos is here. We only had our crappy digital camera, so they're not great, but you'll get the idea.