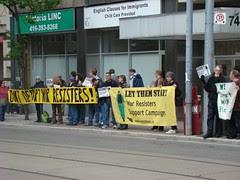 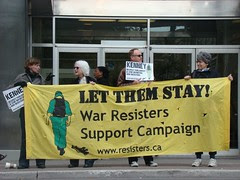 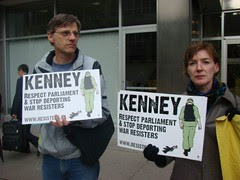 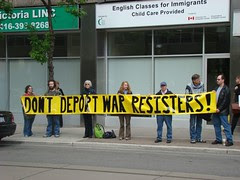 About 20 of us gathered on Victoria Street in downtown Toronto to make a visible presence outside this very significant hearing. A campaigner handed out about 200 leaflets; later in the day, on our way back from a break, someone in the elevator told us she had read the flyer. She looked at Josh and said, "Good luck."

There were only a few seats for spectators in the small hearing room. I was fortunate to attend, by virtue of writing about the proceedings for all of you. Among our little group were three reporters, Canadian author Lawrence Hill, who wrote The Deserter's Tale and is a friend of Josh's, and the wonderful woman who gave the Keys a home when they first came to Canada. (She is named in The Deserter's Tale, but since I didn't ask her permission, I'll leave her anonymous here.)

The Immigration and Refugee Board member who heard the case - the person who will render the decision - was Ken Atkinson.

The Ministry of Citizenship and Immigration was represented by James Railton.

The Refugee Protection Officer, who is supposed to be a neutral party and ensure that the refugee claimant is given due process, was Robert Gould.

Every spectator also had to identify her- or himself for the record, spelling our names and indicating our reason for being there.

Much of the morning was taken up with procedural business, and through much of that, we waited in the hall outside the hearing room. Josh looked very sharp in his suit jacket and tie, and very nervous. He was eager to get it over with.

Even during the procedural part of the hearing, the Ministry was up to dirty tricks. Among the documents they wanted to introduce was an National Crime Information Center (NCIC) search showing no listing for Joshua Key.

Lawyer Alyssa Manning asked them to explain the relevance of the document. The NCIC shows only one thing: whether a person has a criminal record in the United States. In other words, an NCIC search is a historical document. It shows the past; it doesn't show the future. Josh has never been convicted of a crime, so he doesn't have a criminal record. Similarly, an FBI search on his name would come up clean.

No one has ever alleged that Joshua Key had a criminal record. So what was the Ministry up to?

One of the points the Conservatives always make is that the war resisters aren't really wanted in the US, they may not even be prosecuted, and if they are, they'll get off with a slap on the wrist. Showing that Joshua Key's name doesn't come up in an NCIC search supposedly makes this point. But the NCIC doesn't show that.

The IRB did not accept the document as evidence.

That gave me a good feeling at the outset.

It's important to note that most of Josh's case would not be re-heard. All the evidence from his first hearing is already on record. That was an all-day ordeal in which Josh, suffering from serious post-traumatic stress disorder, told his story in detail, possibly for the first time. My campaign friends who were there tell me it was grueling and heart-wrenching.

This second hearing would focus on two issues, in light of the Federal Court decision by Justice Robert Barnes. The decision is a fascinating lesson on refugee law and human rights. For our purposes, the most relevant portion are the following paragraphs.

29. It is clear from the above passages that officially condoned military misconduct falling well short of a war crime may support a claim to refugee protection. Indeed, the authorities indicate that military action which systematically degrades, abuses or humiliates either combatants or non-combatants is capable of supporting a refugee claim where that is the proven reason for refusing to serve. I have, therefore, concluded that the Board erred by imposing a too restrictive legal standard upon Mr. Key.

30. I would add that the Board's assertion that Mr. Key's past combat participation would not be sufficient to support his claim to asylum unless it constituted excludable conduct cannot be correct.

This would give rise to an unacceptable "Catch 22" situation where the factual threshold for obtaining protection would necessarily exclude a claimant from that protection.

An "excluded person" cannot be admitted into Canada. Someone who has committed war crimes is by definition an excluded person. You can do the math.

The first issue in today's IRB hearing would be state protection. A refugee claimant must show that his country of origin cannot or will not offer him adequate state protection from harm or persecution. Justice Barnes said the IRB did not properly address this in its original decision on Josh.

The second issue is prosecution vs persecution. In certain circumstances, prosecution is persecution, and sections 96 and 97 of the Immigration and Refugee Protection Act (IRPA) apply. Section 96 says:

96. A Convention refugee is a person who, by reason of a well-founded fear of persecution for reasons of race, religion, nationality, membership in a particular social group or political opinion,

(a) is outside each of their countries of nationality and is unable or, by reason of that fear, unwilling to avail themself of the protection of each of those countries; or

(b) not having a country of nationality, is outside the country of their former habitual residence and is unable or, by reason of that fear, unwilling to return to that country.

Section 97 is the same, but instead of "refugee," it applies to "a person in need of protection". This is a slightly different status, but for our purposes, not an important distinction.

Then, finally, the meat of the hearing began.

Labels: canadian politics, how the us supports its troops, human rights, war and peace, war resisters