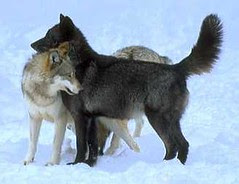 While I wait for an important update on some war resister news, I'll post this info from NRDC. If you value the wild places left on earth, and you oppose killing animals simply out of bigotry and bloodlust, please sign this petition. Public opinion does matter in these issues.

The fate of Yellowstone's wolves is hanging in the balance right now.

Hundreds of wolves got a last-minute reprieve when President Obama put a freeze on Bush's midnight rule that would have stripped wolves in the Northern Rockies of their endangered species protection -- leaving them vulnerable to mass killing.

But this "stay of execution" is only temporary, pending review by the new Interior Secretary.

Now we must rush into action -- and convince Interior Secretary Salazar to reverse Bush's deadly policy and maintain strong federal protection for wolves.

Please make your own voice heard. Send your Citizen Petition to Save Wolves to the Interior Secretary now.

We must act swiftly. Although scientific evidence is on our side -- and the Interior Secretary has pledged to rely on sound science when managing wildlife -- these wolves have formidable enemies.

Idaho has declared that it wants no wolves in the state whatsoever -- and has a plan that could kill more than half of its approximately 700 wolves. The governor has already boasted, "I'm prepared to bid for that first ticket to shoot a wolf myself." Under the state's cruel plan, even wolf pups could be killed.

The wolves of Wyoming and Montana face similar adversaries. And in Yellowstone, wolf populations are plummeting as wolf pups die of a yet-to-be determined disease.

Clearly, the plight of the gray wolf is so dire that we can't afford to stand by and assume the Interior Department will automatically do the right thing.

That's why the NRDC Action Fund is launching a brand-new public mobilization campaign. We need to make sure that Interior Secretary Salazar fully understands that the American people want these magnificent animals protected by the Endangered Species Act.

So please send in your Citizen Petition to Save Wolves right now. Even if you've spoken up for the wolves many times in the past, this is a new day.

With the Obama Administration in office, we have a chance to close the book on eight years of relentless attacks on wolves in the Northern Rockies -- and write a new chapter in one of the most successful wildlife recovery efforts in history.

P.S. Just a few clicks could save hundreds of wolves from slaughter. It's a historic opportunity to stand up for our country's wildlife -- and you can do it right from your computer, so please add your name to our Citizen Petition to Save Wolves today. 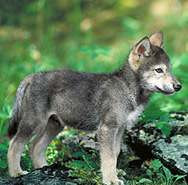