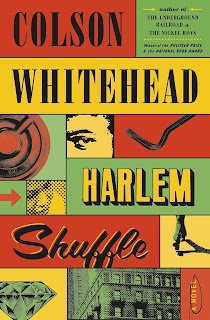 I've been reading Colson Whitehead since his debut novel, The Intuitionist, caught the attention of critics in 1999. With every successive title -- each entirely different than the previous one -- I've loved and admired his writing more. This blog is full of posts about Whitehead's work and how much I love it.*

When Whitehead burst into popular consciousness with the masterpiece The Underground Railroad and the even more remarkable The Nickel Boys, I had one of those silly proud moments, when the world suddenly discovers your private fandom. Here is a truly great writing talent with tremendous versatility, discipline, and courage, and now he is being recognized on the scale he deserves. Bravo!

Now, after the two disturbing, hard-hitting, novelistic explorations of American history from a Black perspective, Whitehead has returned to doing what he did previously: dazzling readers with yet a different genre.

I am the perfect audience for this book. I don't read genre fiction, but I love literary detective, crime, spy, or legal thrillers -- the genre plus something more. Graham Greene, Donald Westlake, Patricia Highsmith. I haven't read a huge number of these, but I adore them.

Then there's New York. For a time I read so much New York City historical fiction that I overdosed and had to kick -- until City On Fire, my favourite fiction in many years, brought me back. Harlem Shuffle indulged my love for historical New York.

I also love books with a strong sense of place. Late-1950s, early-1960s Harlem is practically a character in Harlem Shuffle.

All that, plus it's written by one of my all-time favourite writers. So clearly, take this rave review with a heaping spoon of loving bias. You may well read it and think, very nice, but... what's all the fuss about? That's fair. I say that about fiction all the time.

But if you read it, and you do love it, I hope you'll put Sag Harbor, Zone One, and Apex Hides the Hurt on your list, too.

I never read reviews of books that I know I'm going to read anyway. I love to start a book completely fresh, without even reading the jacket blurbs, so it unfolds exactly as the author intended. Now that I've read Harlem Shuffle, I'm skimming some reviews. This first paragraph from The Guardian is a beauty.

For more than 20 years Colson Whitehead has delivered novels notable for cultural satire, racial allegory, genre expansion and quirkiness: The Intuitionist, Sag Harbor, Zone One, The Underground Railroad (Pulitzer #1), The Nickel Boys (Pulitzer #2). In his eighth novel, Harlem Shuffle, Whitehead offers a literary crime saga that is as delicious as it is nutritious, a much lighter meal than his previous two novels, which emerge from the real-life atrocities of slavery and a brutal reform school in the American south. Whether in high literary form or entertaining, page-turner mode, the man is simply incapable of writing a bad book.

I also loved this bit from The New York Times review.

Whitehead's sweet, sweaty, authoritative, densely peopled portrait of a Harlem in near perpetual summer is the most successful part of the book. Had I not known Whitehead was a talented shape-shifter, I — as an outsider to Harlem — would have believed he had only ever written about this setting.

what i'm reading: the underground railroad by colson whitehead, October 29, 2016

what i'm reading: the nickel boys by colson whitehead, September 5, 2019

(And I've just noticed that in the 2019 post above, I also gathered all these posts!)

Although I am not generally a big fan of detective/crime books (or movies or television shows), I loved Whitehead's last two books and have already pre-ordered a copy of this one for my Kindle. Usually I find those kinds of stories either poorly written or too plot driven, not enough character driven. I read them and instantly forget how the crime was solved because I guess I didn't really care about the crime in the first place. But I expect that I will really enjoy this book because of how it's written and because of its setting.

(Notice how I used it's and its in that sentence? Just for you!)

I don't read any genre novels for the same reason. To clarify, though, Harlem Shuffle is not a detective story, it's a crime story.

Thanks for the punctuation! :-)

And I'm glad you're going to read it!

Ah, ok---that's different. To me most crime stories are ultimately detective stories---who did it and how will they prove who did it. I am really looking forward to reading the book no matter what the genre.

I will let you know what I think. And maybe then I will know what the difference is between a crime novel and a detective novel.

An easy way to think of the difference: in crime stories, you are following the criminal(s). The main characters are doing crimes, not solving them.

Allan and I both like crime stories -- heists, cons, underworld anti-heroes.

That helps to explain the difference. I don't know how I feel about crime stories as I can't think of any that I've read.

Looks like you have written about all of his books except the first one.

Looks like you have written about all of his books except the first one.

I keep meaning to re-read that. I will, eventually.