11.11 readers' advisory meets "at your library" in the north island eagle 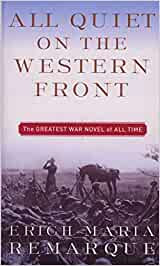 Celebrate and Commemorate Remembrance Day with a Good Book or Three

Readers have told me they enjoy the themed booklists I’ve shared. Remembrance Day is an occasion to share another list. The Great War, as it was known at the time, has inspired countless authors, poets, playwrights, and screenwriters. Many authors have used the horrors of World War I as a lens to explore issues of war and the scars it leaves on all involved. Here are some excellent titles that may be of interest.

Title: Regeneration, The Ghost Road, The Eye in the Door (The Regeneration Trilogy)
Author: Pat Barker
What you’ll find: These novels, written in the 1990s by British novelist Pat Barker, were inspired by the real-life memoirs of soldier and poet Siegfried Sassoon. They are widely thought to be among the best historical fiction of our time.

Title: A Farewell to Arms
Author: Ernest Hemingway
What you’ll find: This 1929 novel is a classic for a reason. It is told in the first-person by an American serving as a medic in Italy, and explores war, love, courage, resistance, and so much more. A rich and deeply moving book.

Title: Birdsong
Author: Sebastian Faulk
What you’ll find: This family saga follows two parallel plots: a British soldier at the front in Amiens, and his granddaughter who is trying to understand his experiences, 60 years later. This book is lushly romantic, yet also deeply realistic.

Title: The Absolutist
Author: John Boyne
What you’ll find: Set in the trenches, this novel explores passion, jealousy, heroism, and betrayal. It’s chock full of tension and suspense, and a very surprising ending.

Title: The Winter Soldier
Author: Daniel Mason
What you’ll find: A young medical student enlists in the war effort, expecting heroism. Instead, he finds a desolate, freezing outpost, and decisions that will haunt him for a lifetime. A gripping saga of war, medicine, love, and redemption.

Title: Fear
Author: Gabriel Chevallier
What you’ll find: This gripping novel is based on the author’s own experiences as a nineteen-year-old soldier in France. First published in 1939 – and banned until 1950 – it speaks to the vast gulf between the public, official view of war and the lived experiences of those who suffer through it.

Title: At Night All Blood Is Black
Author: David Diop
What you'll find: This story of a Sengalese soldier serving with the French forces, explores some surprising themes of vengeance, responsibility, and shame, along with racism and colonialism. It is unsparing and very graphic, also brutally honest and riveting.

Title: A Duty to the Dead
Author: Charles Todd
What you’ll find: This is the first book in a series featuring Bess Crawford, whose belief in honor and responsibility leads her to volunteer as a battlefield nurse. Her promise to fulfill a soldier’s dying wishes draws Bess into murder, intrigue, and tragedy, and tests her determination and courage.

Robert Fisk: Do those who flaunt the poppy on their lapels know that they mock the war dead?

My response to poppygate after the fact

If you do audiobooks, it might be worth seeing if Dan Carlin will do library editions of some of his history series. "Blueprint for Armageddon" is one of the best popular histories of WWI around: https://www.dancarlin.com/product/hardcore-history-50-55-blueprint-for-armageddon-series/