what i'm reading: john steinbeck and me 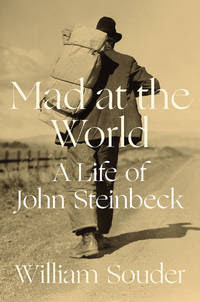 I recently read Mad at the World: A Life of John Steinbeck by William Souder, part of my new-found interest in biographies over the past few years.*

Instead of reviewing the book, I thought I would write about the presence of John Steinbeck's writing in my life -- its history, its influence, the connection I feel.

The book itself is quite good, but I assume it's of interest only to readers of John Steinbeck. Possibly to people who like biographies of writers? I don't know. Personally, I'd be very unlikely to read a biography of a writer whose work I didn't read or didn't like. If the topic is a good match for you, it is a good book.

For me, it's an obvious choice: my shiny new hardcover copy was a birthday present from my partner.

Steinbeck's writing has had a huge affect on me. It influenced my desire to travel, my need to write, and my worldview, from an early age.

To travel, to write, and to fight

I'm sure I would have loved to travel without this book. But Travels with Charley awakened a desire for a particular form of travel. I dreamt of wandering and roaming backroads, living with no fixed address, living so lightly that everything you need would fit in a simple van. It's something I've always wanted, and yet have never done. I've made (or at least tried to make) many of my dreams come true, but this one -- incompatible with so many other things I wanted -- has remained a fantasy.

Still, travel has always been a huge passion of mine, and I can credit this book with its awakening.

Interestingly, the other voracious travelers in my life were similarly influenced -- my mother by reading James Michener, and my intrepid grandmother, from watching "I Spy"! (My brother is also an avid traveler, but I don't know if he credits anything in particular.)

Travels with Charley also made me want to write. There is only one other book that I can say that about: S. E. Hinton's The Outsiders, my favourite book for countless years, and still so close to my heart, it aches to think of it. Although I'm sure my need to write is innate and was not bestowed upon me, these two books were the spark.

And finally, there is my worldview.

Both my parents were very progressive. They would have called themselves liberals in those days, but their politics were socialist. My father represented union workers his entire working life; my mother was a proud member of the teachers' union. They were pro civil rights, anti war, hated Nixon, revered people like Cesar Chavez and Eugene V. Debs. (Neither of them ever became conservative, by the way. My mother will still rail against Trump at any opportunity. The only time I ever missed my father was watching Obama's inauguration. He would have loved to have seen it.)

I've always been interested in social issues -- literally all my life, as soon as I was able to understand anything -- and ready to jump on a soapbox at the slightest provocation. I remember having to write an essay in my high school Spanish class, and I wrote against capital punishment. The teacher said that I always took on temas muy importantes. I was embarrassed, because I didn't know what other kinds of issues there were.

So, would I have been involved in social justice had I not read The Grapes of Wrath? Sure. It was in me. But when I read the book one summer while in high school, I suddenly understood my worldview in a more profound way, and I embraced it. The way the story moved me was unique in my experience -- and would remain so for a long, long time.

What moved me wasn't the story of poverty and the dustbowl, or the bigotry the migrant families encountered, or the conditions they endured. It was how people organized to collectively better their lives. It was how the people with the least, were most willing to share, while those with the most hoarded their wealth and purposefully kept others in poverty. It was thinking about what was possible when people organized around a cause and fought for justice.

It may seem corny or melodramatic today -- or maybe it doesn't, I don't care either way -- but when I first read Tom Joad's "I'll be there" speech, I knew that's what I wanted for myself. Today, it still makes me weep, and take measure of my life.

I've read The Grapes of Wrath three times. It is one of a small number of books that I periodically re-read.** It has never lost its profound meaning to me.

While still in high school, I read most of Steinbeck's shorter novels, and his other "big" book, East of Eden (which I've now learned was his favourite of his own work). Later, as an English major in university, I saw that Steinbeck's writing was not highly valued, at least not in that era. I remember a classmate who was taking a Steinbeck and Faulkner course remarking that Faulkner was so much "better" than Faulkner, because Faulkner was more complex, more difficult to understand, and Steinbeck was almost embarrassingly straightforward.

That sums up nicely why Steinbeck is important, and I why I believe he's worth reading: his accessibility. Steinbeck's language, his meaning, his purpose are available to most readers. You don't need anyone to explain Steinbeck to you. His writing is elegant and profound, but it's not obscure.

I do like many writers whose work is less accessible. But I value accessibility in writing very highly, especially in political work. I may read many writers who "preach to the converted," but the writers I admire most try to reach new minds.

In 1988, Allan and I went to California on our first real vacation together -- San Francisco, a drive down the coast, then to Yosemite National Park. It was a magical trip in so many ways, and one of our stops was the John Steinbeck Library in Salinas. There was a small but wonderful exhibit of Steinbeck memoribilia, including the handwritten first page of The Grapes of Wrath. This visit meant so much to me, more so for having a partner who would understand my desire to go.

In 2002, we did a west-coast baseball trip, driving the Pacific Coast from the Olympic peninsula in Washington State to the border of Mexico. We saw games in five parks; only the Padres weren't playing at home. This time, we visited the National Steinbeck Center, which opened in Salinas in 1998. It's a great place, and I highly recommend a visit if you're nearby. However, the manuscripts that I found so thrilling are now available to researchers by appointment only. I am so fortunate to have seen the little exhibit in the Salinas library before it was subsumed into a bigger, sleeker museum.

Mad at the World reminded me of Steinbeck's many other novels, most of which I read a very long time ago, likely in high school. Like my favourite contemporary writer, Colson Whitehead, every one of Steinbeck's books is different. I'm thinking I will re-read the shorter novels in between my other reads for a while. I don't know how this will work. I'll let you know.

* People whose biographies I have read in the past few years: Frederick Douglass, Muhammad Ali, Jackie Robinson, Helen Keller, Galileo, Laura Ingalls Wilder, Louise Fitzhugh, Janis Joplin, a dual biography of Martin Luther King, Jr. and Malcolm X (not my first biography of either man), plus graphic novel biographies of Ali, Emma Goldman, and the graphic adaptation of The Diary of Anne Frank.

** The others are 1984, The Diary of Anne Frank, and Winter's Tale by Mark Helprin. Helprin turned out to be a conservative hack, so I doubt I'll go another round with WT (which is just as well, I've read it twice). City on Fire by Garth Risk Hallberg will likely pull me back for another round.

I can't tell you how much I enjoyed your post. I recently finished reading the same biography and did wonder, like you, whether it would be of interest to those who hadn't read Steinbeck.

I was rivetted by it, having taught The Grapes of Wrath more times than I can count. It was one of those rare pieces of literature that I never tired of teaching. It's message, in my view, is timeless.

Many critics have dismissed it over the years for, as you said, its lack of complexity and the fact that many regarded it as a 'sentimental novel.' To me, this was always a dismissal that reeked of intellectual snobbery. Are novels not meant to reach a large audience to impart their themes?

P.S. I also think that East of Eden is a magnificent novel.

Lorne, thank you so much for your comment. I agree that those assessments are snobbery, and also cynical.

I also love East of Eden. I also love the movie, and it turns out Steinbeck did, too.

Thanks again, it's wonderful to connect through books.

Not sure how it happened but the first Steinbeck I read was in 8th Grade: 'In Dubious Battle.' Then I read it a second time within six months. And teachers wondered why I gave them such black looks....

John, that will be on my list to re-read. I know it's about union organizing, but I honestly don't remember anything about it.

Your post made me remember how much I enjoyed reading Steinbeck's books back in junior high and then high school. We first read The Pearl in junior high for school and then The Red Pony. I remember being deeply moved by both books. The language was so evocative, and the imagery so clear. I then read The Grapes of Wrath and East of Eden. I absolutely loved East of Eden, and Grapes of Wrath also moved me deeply. I can't say I was changed by it the way you were, probably because I was always more into books for the stories and characters and at that age not thinking about the deeper meanings. I never read Travels with Charley---I really should. In fact your post makes me want to go back and re-read the ones I did read to see how I feel about them now over fifty years later. Thanks!

I didn't get to read The Grapes Of Wrath until about 3 years ago.
About half way through , I stopped and thought ' This one of the best things I've ever read '. Anyone who isn't moved by it is probably dead.
I will get round to reading more JS along with many , many others.
Thanks for making my to read list even longer.

1984 is one of the greatest books in the English language. I re-read it every 10 years, and each time, I get more out of it.

Older Post Home
Subscribe to: Post Comments (Atom)
As a settler in Port Hardy, I live on the unceded traditional territory of the Kwakwaka’wakw peoples, whose historical relationships with the land continue to this day.