what i'm reading: the nickel boys by colson whitehead 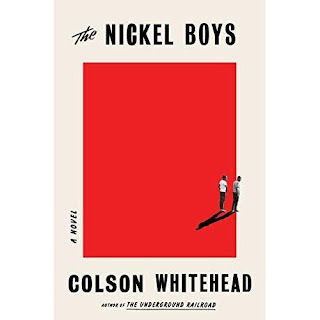 By now wmtc readers, at least those who read my "what i'm reading" posts, know that Colson Whitehead is one of my favourite authors. I was so happy that he achieved breakthrough success with The Underground Railroad, winning both the Pulitzer Prize for fiction and the National Book Award.

I've been reading him since his debut novel, The Intuitionist, was published in 1999. So when I tell you The Nickel Boys is his best work so far, trust me, this is high praise.

It tells a simple story of one boy's journey into the irrational, omnipresent, terror and violence of Jim Crow. The principal setting is a boys' "reform school" (so-called) in the segregated American South. The conditions and their effects will remind Canadian readers of the residential schools that Indigenous children were forced to endure.

It's disturbing to read, as it should be. The violence is not graphic -- most of it happens offstage -- but it's not hidden. It's everyday violence, and it's brought to us in everyday language.

What I love about The Nickel Boys is its restraint. It's a short book. The writing is spare, and precise. No wasted words. Everything simple but laden with meaning. Nothing is avoided, but nothing is adorned. Unsentimental, unsensational, unshocked. It's like a drumbeat -- like a heartbeat -- demanding we listen.

And what I love about The Nickel Boys is how the author trusts his story to do the work. One boy's story becomes a microcosm of a monstrous world.

Most people know that the US was segregated. But Jim Crow was much more pervasive than segregation. Many people said The Underground Railroad brought them closer to slavery than they had ever gone. The Nickel Boys does that for post-slavery America.

There's some suspense involved, so I won't go into any plot details. But here's a sample, after the time shifts closer to the present.

Chickie Pete and his trumpet. He might have played professionally, why not? A session man in a funk band, or an orchestra. If things had been different. The boys could have been many things had they not been ruined by that place. Doctors who cure diseases or perform brain surgery, inventing shit that saves lives. Run for president. All those lost geniuses -- sure not all of them were geniuses, Chickie Pete for example was not solving special relativity -- but they had been denied even the simple pleasure of being ordinary. Hobbled and handicapped before the race even began, never figuring out how to be normal.

Whitehead does some amazing things with language in this book. There's a word: agape. I know the concept from reading Martin Luther King. The book's main character thinks about agape, and about its seeming impossibility. Then later there's a word: agape. The character's mouth is agape. It's a tiny detail. I hope there are other close readers out there who will appreciate this.

Similarly, I have a note to myself, a scribble from a small spiral bound memo book. A character in The Intuitionist is allowed "to pass" -- meaning she can go through, pass the threshold. But pass has another meaning in African-American history: the light-skinned black people who "passed" as white. A twist of language, small and offhand, but packing so much meaning into a word. I love this stuff.

I read Apex and was like, wait, this is by the guy who wrote that elevator book? And those NYC essays I went so crazy over? So I went back and read everything I'd missed.

(I haven't yet read the nonfiction The Noble Hustle.)

I recommend any and all of these books. My only partial disclaimer is for John Henry Days. It's a very good book -- I loved it -- but it's a bit more opaque, more conceptual than the others. The rest I recommend wholeheartedly, including the zombie novel. You won't be disappointed.

This New York Times review of The Intuitionist concludes: "Literary reputations may not always rise and fall as predictably as elevators, but if there's any justice in the world of fiction, Colson Whitehead's should be heading toward the upper floors."