what i'm reading: there, there by tommy orange 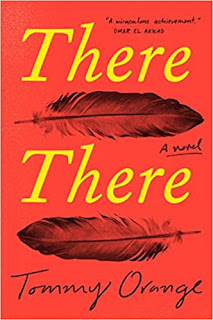 After finishing and marveling over Kate Reed Petty's True Story, I picked up There There by Tommy Orange and had a similar reaction.

I don't read a lot of popular fiction, so reading two debut novels back to back, and really enjoying both of them, was a wonderful surprise.

What does it mean to be an Indigenous person -- a Native, Native American, First Nations, Native American Indian, an Indian -- in the world today? Not in the pre-contact world romanticized in our imaginations. Not as any of the stereotypes placed on Native lives, be it the tragic-heroic model or that of hopeless despair. What is it like to be Native in the current, urban world in which the majority of Indigenous people in North America now live.

How do you keep tradition alive without being defined by it? How do you understand a catastrophic history and its impact on your life, without being obsessed with the past? What does it mean to be an "urban Indian"?

In There There, Orange asks these questions and lets many different characters -- their lives, their stories -- attempt to answer them.

I don't usually like novels that are collection of stories and vignettes, but Orange's writing is so good that it pulled me in and never let go. As connections among the characters are revealed, plot lines emerge, and suspense builds. The chapters become shorter, the connections more urgent, the answers shattering and sometimes surprising.

Here's a bit of an interview with the author in The Guardian that I found interesting.

What made you decide to have 12 narrators?

I really liked what a chorus of voices could do. I like, within a novel, to jump around and see how the different voices connect. It gives the reader a lot to do. And when the reader gets the connection, something really special happens: like a clicking in place. It gives it a kind of propulsion and makes it a really active reading experience.

Did you also want to portray as many different Native urban experiences as you could?

I guess so. There's a monolithic version of what a Native is supposed to be. Writing a polyphonic, multigenerational novel is resisting this one idea of what being Native is supposed to look like. If we all have to be historical, with a headdress, looking off into the distance, that’s hopeless as far as building a proper, complex, human identity.

Many of your characters are deeply troubled. Why?

I wanted to write characters that felt true and real, and there's a lot of harrowing detail about the lives of Native people. You can just look at the health statistics and they're pretty staggering. I wanted the characters to be working-class, because so often the characters in novels that I've read are white and upper-middle-class with white, upper-middle-class problems. I didn't want to go anywhere near the old romanticised view of the Indian as the warrior, the powerful, the unflinching, the brave. That just doesn't feel whole to me.

Each character in There There owns their Native identity in different ways and imbues it with meaning (or not) in their own way. Their stories touch on family history, trauma, addiction, recovery, shame, forgiveness, loss, memory, and identity. Their voices are funny, angry, desperate, and hopeful. The writing is simply amazing.

I am looking forward to reading this this summer. I downloaded it to my Kindle when you mentioned it on Facebook.

Thanks for letting me know! I'll be interested in hearing what you think.